Pauline Church on the Rock

It was late in the year of our Lord 1079 that the King gave the command. This meddlesome bishop would trouble him no longer. So, wasting little time, his knights descended upon the Church on the Rock. There they found the bishop and, drawing their swords, they made to cut him down. However, a mysterious power repelled their blades as each man tried to strike - it was an omen to be sure. Yet the King would not be put off by such a sign and he returned himself to deal with the priest. This time he caught the bishop unawares as he was saying mass, and he ran the poor man through. Then, keen to make sure that the job was well done, he had the bishop dragged outside where he was unceremoniously hacked to pieces. The King was certain that he had triumphed, but a curse descended and before long he was forced into miserable exile.

The martyrdom of Stanislas Szczepanow, which mirrors that of the English bishop, Thomas A Beckett, gave rise to a powerful cult. This gathered such a momentum that Stanislas became not only the patron saint of Cracow, but of Poland herself. An echo of this reverberates today in the historic procession from Wawel to the Church on the Rock. Indeed, the tomb of St. Stanislas has held pride of place in the Cathedral since 1362, and kings were crowned at its foot. The tale struck a resounding chord, and as a symbol of a man of the people who stood up against tyranny, its message continues to echo. During the communist era the saint was regularly invoked by the Church, most memorably when Pope John Paul II held aloft his relics before a crowd of one million people at Cracow in June 1979. 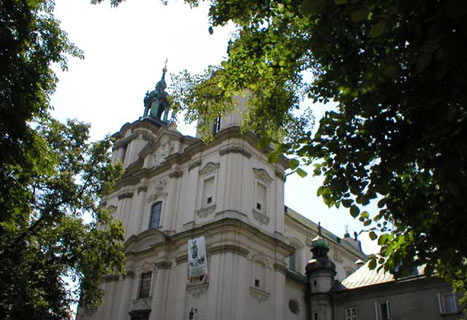 There has certainly been a church on this site since the eleventh century. Later, King Kazimierz the Great built a large gothic basilica to replace the older foundation. When this was on the verge of collapse in the early eighteenth century, a new church was constructed. This was done in the baroque style, as one finds it today. Finally, in 1882, came one last change, when the crypt was transformed into an exquisite pantheon to great Polish artists.

In spite of its flamboyant exterior, the church has a serene quality that sets it apart from the more riotous gold extravagances that one finds in many other places of worship. Perhaps it is also the charming setting that heightens this tone. The church is out on a limb, perched on a rock above the river - in this respect it is certainly best approached down the beautiful lane of ulica Skaleczna, which forms a kind of avenue to the monastery. Inside there is a distinctly harmonious feel to the design, crowned by a fine altar-piece, constructed with large clusters of columns; an unusual concept that creates a sense of rolling movement. Between them is an inspired painting of Saint Michael ascending into heaven.

As one would expect there is a great emphasis on Saint Stanislas. In the northern aisle one finds an altar that marks the spot where the bishop is said to have been killed. A large, jewel-encrusted painting depicts this act whilst below, mounted in a glass case, one finds a block of wood - the very same stump, indeed, on which the hapless priest was quartered. Legend recounts that a dismembered finger was thrown into the nearby pond, which later became known for its healing properties: miracles soon abounded. This pool was turned into a very elegant font during the 17th century and it remains in fine condition. Its corners rise up into obelisks, each crowned by an eagle. This is because when the king and his knights departed, four white eagles descended from the heavens to guard over the saint. And when, on the morrow, the pious village folk came to bury their bishop, they discovered that his body had miraculously reformed - a sign that Poland herself would be reunited.

I request you for partnership and visiting.I want to be one of your church member and so accept my request by God's grace. Bye bye God bless