This tremendous festival has been held in Krakow for over twenty years now, and the former Jewish district of Kazimierz has itself steadily regained its colours during those years. Kazimierz may still be somewhat rundown in parts, but it's now one of the most spellbinding areas in Krakow, and the Festival of Jewish Culture is undoubtedly one of the brightest feathers in its cap.

Every year in June or July visitors are able to enjoy celebrated Jewish and Jewish-inspired acts from across the globe strutting their stuff in Kazimerz's synagogue, cellars, theatres and cafes. Amongst regular performers, hot names to look out for are Kroke, Brave Old World, The Cracow Klezmer Band and Ukrainian newcomers The Kharkov Klezmer Band. 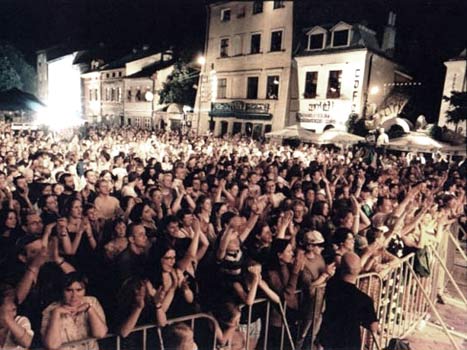 On top of all this music, every year there is an interesting programme of book launches, lectures, tours of Jewish sites with international experts, and even introductions to the weird and wonderful world of Jewish cuisine - in short a unique insight into Poland's rich Jewish legacy. During the Renaissance and Baroque eras, Jews talked of Krakow as a 'Jewish Paradise', such was the extent of their freedoms and of the richness of cultural life in the city.

A key support player in the festival will be the Galicia Museum (ul. Dajwor 18). This recently opened enterprise deserves a special mention, not simply due to its programme of events for the festival, but also for its permanent exhibition, which could not come more highly recommended if you're curious about Poland's Jewish legacy. Their exhibition is nothing short of a masterpiece.

Every year the festival culminates in a huge open air concert on the picturesque Szeroka Street (the aptly named Wide Street). It's a lot of fun and there'll be plenty of dancing and merry-making to round things off.

You can pick up a printed copy of the festival programme from the Cultural Information Office just off Krakow's Main Market Square at ul. sw. Jana 2. Or if you want to keep tabs on the latest news online, check out the Local Life events section, where you'll find up to the minute information on what's going on.

It's so soon! I can't wait! Such an amazing festival...free concerts everywhere...fantastic music... lots of dancing & sunshine :D

How can I get a schedule of events for 2018? I will be in Krakow during this festival! Thank you!

I am planning a European trip next year and (2018) one of my stops will be in Krakow and I would like to plan it to be at a time when the Jewish Cultural Festival is in progress. Could you please send me that information. Thank You, Reuben Ungar

I was there on the last day... I just arrived in Poland a few days ago.. Caught a glimpse of that singer Michael mentioned & Ih I agree with him.

Can,t remember seeing a worse American singer than thisfemale artist. Seemed like she was on for an eternity. Great festival otherwise

Many Poles who are interested in Klezmer music may have Jewish souls according to an American Progressive Rabbi; Allen Maller who was a scholar in residence at the Reform Progressive Synagogue Beit Warzawa in September and October of 2010. Rabbi Maller spoke of a Kabbalah teaching that Jewish souls from previous generations of Jews who were cut off from the Jewish people and left no Jewish descendants, were reincarnated in their non-Jewish descendants 3-7 generations later.

"In 2012 the Festival of Jewish Culture is scheduled to start on Friday, June 29th to end on Sunday, July 8th."

When are the Neimah Singers coming back to Krakow - they are without doubt the best choir in the world, and the standard has fallen in the past couple of years

I can't believe the next jewish festival 2012 is 4 months away and I can't get any definitive dates. Please help.

Please tell me the dates of the festival in 2012. Will there be a basic course of Yiddish language in English (or German)?

What are the dates of the 2012 festival? Does someone have a recommendation of a tour?

We are a Male voice choir centered in Jerusalem. We have been active for some thirteen years and have appeared before the President of Israel.We have had concert tours to England in 2005,2007,2010 and participated in the International Eisteddfod in Wales in 2005. Our choir, the Ramatayim Male Voice Choir has broadcasted on the BBC in in England and on Israeli Radio.We would be interested in the possibility of performing in Krakow in June 2012

I was carried away by the music and the temperament of the singers. What a rivetting event!In a couple of weeks I will savour it again. Am looking forward to going back to Kazimierz, although I can't deny a deep and bitter-sweet melancholy when I am there. hugs, j.

I have been taking groups to this fantastic event for the last 15 years, the mix of Jewish music and the atmosphere of a once great Jewish district seeps out of the cobbled streets.

looking for good orgeniser including klezmer festival krakow 2011.party up to 8 in thair 60,s.

Would you please recommend one or more reasonably priced tour services, from the United States to Krakow, that focus only or mainly on the Krakow Jewish Culture Festival, June 26-July 4, 2010? On the Internet, I found the PolandJewishHeritageTours.com, but it is too expensive for me. Thank you. Larry Rosenberg, in Arizona, USA. larryros@gmail.com

Had an amazing time at the festival, and yes, the closing party was fantastic. Balkan Beat Box especially good. Got bthe whole crowd going!

Enjoy the festival. you must go to the 'Shalom on the Szeroka' party on the last day. Great party and unforgettable atmosphere.

Thanks for the new festival dates and link (in English!!!). Should be a good show this year.

What are the dates for the 2009 festival?

This page is really helpful in telling me what goes on.

what are the dates for the Jewish cultural festival in 2009?

What are the date for next year 09? Is Klezmer music festival a constant of this festival. Where I can get more information on this specific topic?. Thanks a lot. Mauro

What are the dates for the 08 festival. Please let me know as soon as possible. Why is this not on the internet? Everyone in the world is looking for this?

2008 dates appear to be June 28-July 6, according to the festival's website at www.jewishfestival.pl/

When are the dates for the 2008 Jewish Festival, please? Thanks.

Excellent site with very good and useful information! I have a question: Do you know the dates of the Jewish Festival in 2008? Please send dates to me if you have them! Thank you so much...I have saved your site to 'my favorites'

I just learned about this festival! Can I please find out the dates for 2008?

Jewish Culture Festival that has been an annual fixture in the city's cultural agenda since 1988.