By 1500 Cracow was not only one of the richest cities in Europe but also one of the best fortified. The Old Town was ringed by a great wall, and this was punctuated by forty-seven towers and encircled by a moat. Immediately beyond this lay a further line of defense, comprising of a second wall and yet another moat. This outer wall was pierced by two barbicans, one of which, a splendid edifice, still survives. Owing to these formidable defenses, marauding armies were faced with a great dilemma. Much as they might wave the dismembered heads of those unlucky souls that had been caught beyond the city limits, more often than not they could not traverse the wall. Indeed, for a period of about two hundred years, Cracow was unbroken by foreign invasions. 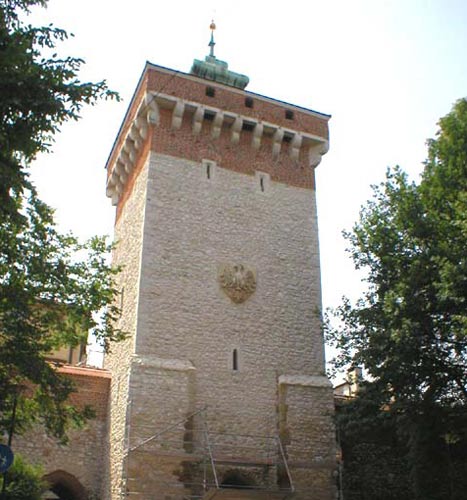 In spite of its military purpose, the defensive wall was a thing of great character. This was not least because each tower differed from the next. They had their own idiosyncratic qualities - some were squat whilst others were lean and elegant. Furthermore, each tower belonged to one of the myriad guilds that had sprung up within the city. So, there was a cobblers' tower, a saddlers' tower, even a gunpowder makers' tower. And responsibility for guarding the city lay not with a troop of Royal soldiers but with the merchants themselves. Each guild had its own tower and its own stretch of wall from which to keep an eye on things.

By the close of the eighteenth century several towers had collapsed whilst others were so dilapidated that trees were growing up out of their roofs. When the Austrians took over they decided to raze the complex to the ground. However, owing to the efforts of one Feliks Radwanski, a professor who was inspired by the patriotic and romantic associations of the fortifications, a campaign was launched to save them. They managed to salvage the most northerly section, which included four towers and a barbican. At the centre of this was St. Florian's Gate, which is topped by the Furriers' tower. This gateway is the historic entrance to the city, and the starting point of processions that hail back to ancient times. This route, which leads down Florianska street and on to Wawel, is known as the Royal Way.

On either side of the gate stand two towers, and both are delightful examples of their kind. The eastern tower belonged to the haberdashers, whilst the western one was manned by the carpenters. As night falls, one can imagine those fellows, raking over the embers of a dying fire, swigging down a little ale and perhaps sharing a joke that was not for their wives' ears as they glanced out into the wilds beyond the city.

I absolutely love when history is preserved. I already wanted to go to Poland to trace my ancestry but now I am even more excited to see that there are beautiful places to go see.

Where can I find an ancient walled city where ancient healing fires were performed in Krakow?

Fantastic site!! I go to Krakow on July 27th. Reading all the above is really wetting my appetite. I can not wait!!