For those pilgrims, merchants and travellers that were bound for Cracow in times gone by, that first glimpse of a steeple or cupola must have been a rousing sight. After the treacherous business of ferrying one's goods (with all the encumbrances that life on the road entailed), here at last was home. During that time, the Middle Ages, the entire city was ringed by a system of walls and moats. The Barbican was both a principal gateway and a key element of defence. A covered passageway linked it to St. Florian's Gate, and by day the city's traffic passed through. Of course, for any self-respecting foe, Cracow - an immensely wealthy city - was quite a prize, and it was attacked on many occasions. In times of siege, reinforcements were hurriedly dispatched along the tunnel, whilst archers attempted to beat back the marauders from the many windows and loop-holes. 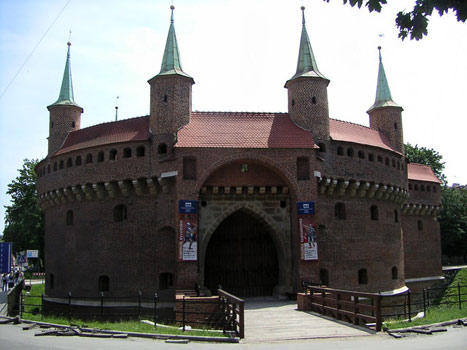 Today the Barbican has an almost fairy-tale presence. Its seven turrets, like the pointed hats of some woodland sprite, stand out amidst the trees of the Planty. In summer months concerts are sometimes held there, whilst during the daytime it is possible to walk around the interior, explore its nooks, and imagine those sentries of old. Built in 1499 during the era of the Ottoman threat, the Barbican has survived, against all the odds, and remains the best example of its kind in Europe.

Krakow Barbican is a resplendent building on the top of the Royal Way. A great way to enter the city!