It's usually Warsaw that gets the reputation for brazen modernity, whilst Krakow tends to be celebrated for its old world charm. Things were just the same during the roaring 20s and 30s, when Warsaw was a jazzing, jiving city that embraced the future with gusto.

The 'boutique hotel' label conjures up images of Philip Starck's glitzy style - all film star glam. Such a hotel has not come to Krakow yet. (But given the blistering pace of development at the moment, there may be a dozen by the end of the decade). Yet whilst Krakow does thrive off its old world image, the onetime Royal Capital can give Warsaw a run for its money when it comes to choice accommodation. What you'll find right now is a range of ravishing hotels that are full of character. Many of the best are to be found in historic mansions, but that certainly doesn't mean you're in for endless mock-aristocratic grandeur. Far from it. 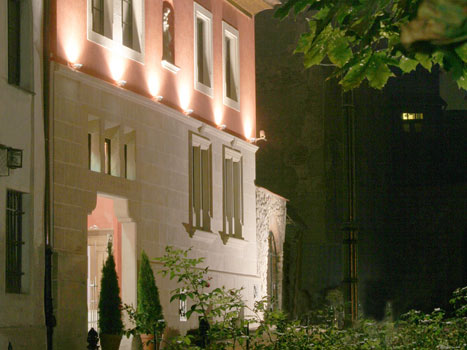 Above: The beautiful facade of the Hotel Grodek

The hotel that's caused the biggest splash in recent times is Hotel Stary. It's got all the hallmarks of a hip boutique hotel, and it's blessed with a show-stopping location just off the Market Square. Hotel Stary has set up shop in a soaring eighteenth century mansion, yet it has a decidedly contemporary feel to it. Rooms have a sleek and sultry feel, whilst the suites are out of this world. Meanwhile, the glamourous swimming pool in the cellars would not be out of place in a Bond film - minus the sharks we might add. Four floors higher at the fantastic roof terrace bar, guests can savour the supreme view of Krakow's Market Square.

The owners of Hotel Stary also have a couple of other crackers that can give most boutique hotels a run for their money. The Copernicus is amongst the most popular in town, with its location at the foot of the Royal Castle. Although more traditional than the Stary, Copernicus blends the old with the new to dazzling effect. Again, the suites are sensational, with all the romance of a chamber in the Royal Castle itself.

The third boutique hotel from the Likus brothers team is the Hotel Pod Roza. A cool, marbled elegance reigns here. It's a fresh, upbeat option that's well-lit and rather suave. Like all of Likus's boutique hotels, it boasts a fine restaurant.

Another company that's raising the bar for Krakow's luxury scene is 'Donimirski Boutique Hotels.' Their showpiece in Krakow is the Hotel Grodek. Intimate, stylish, romantic - all these words leap to mind. A Polish princess oversaw the decoration, and besides classic European rooms you'll find a funky Chinese double and some spacious suites. The restaurant is a striking modern number that's run by prize-winning chef Rafal Targosz. The sleepy setting of the hotel heightens its romantic appeal, cocooned away on a charming cul-de-sac by the Dominican Abbey.

Besides Grodek,'Donimirski Boutique Hotels' has two smaller options in town, including the trusty Maltanski and the tiny Hotel Pugetow. The former is an elegant, unpretentious choice that's always a safe bet. The latter is of a similar standard, and it is part of the historic Puget Palace complex. Both have guarded car-parks.

However, if you really want to push the boat out, you might consider a stay at Zamek Korzkiew. This is the jewel in the crown of the 'Donimirski Boutique Hotels' enterprise. Here you can choose from five chambers in a full-blown medieval castle. This enchanting stronghold once belonged to Jerzy Donimirski's ancestor, and his restoration of the castle has been a real labour of love. It's just thirteen kilometres from the centre of town, so it would be a perfect compliment to a stay at Grodek. A magical place.

We've covered most of the winning boutique options so far. But there are several more back up choices to consider. And of course, the list is going to grow and grow in the next few years.

One undoubted star that can hold its own with most of those mentioned thus far is Hotel Wentzl. This little gem is right on the Market Square, and it has just twelve rooms. If you can bag a room overlooking the square you're unlikely to be disappointed. Some of the rooms are decorated in rather contrasting styles, so check beforehand to avoid a surprise!

That pretty much wraps up the state of play for Krakow's boutique hotels. But if you want to play it safe, there are three more upmarket Krakow hotels that might serve as a backup. These are Ostoya Palace, Amadeus and Grand - three traditional hotels with handy locations in the centre of things. Ah, the agony of choice....!

I was in Krakow over the New Year - had a great time. Would recommend the Stary. Very professional and bang in the centre.

The agony of choice! But someone may decide for us as it's peak season. Fingers crossed we'll get a room!

Cheers for the tips, have been studying the choices. looking forward to our trip to Krakow!

The Grand is not so much a 'boutique' hotel as say, The Grodek, the Stary or the Copernicus. But yes, prices are very reasonable for these extremely high standard hotels.

The boutique hotels here are really beautiful, and still a good value for the money in comparison with the UK or western Europe. The Grand is especially gorgeous!