Every mansion on the market square has its stories to tell. Amorous intrigues have been hatched, poets and pianists have weaved their magic, and during times of occupation, plans for national uprisings have been laid. The so-called Palac Bonerowski is one such place that's no stranger to drama. Former owners have included trusted allies of the crown, whilst more recently, one of Poland's most eccentric artistic patrons held court there.

In 2007, the palace was given a new lease of life when the whole edifice was opened as a luxury hotel. Painstaking renovation, both inside and out, has brought the place into the twenty-first century, whilst simultaneously conserving all sorts of wonders from times past. So exquisitely has the facade been spruced up, one imagines it hasn't looked this good in centuries. 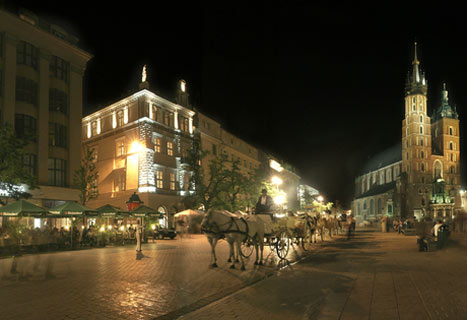 Above: The Palac Bonerowski on Krakow's Market Square

The hotels that have made their home on Krakow's main square can be counted on one hand (a hand that's missing a few fingers to add a gothic touch). The Palac Bonerowski commands as fine a view onto the plaza as any, located right in the middle of the northern rim of the square.

Travellers can relax in the lap of luxury here, not simply as Krakow's top treasures are all at your fingertips, the hotel itself is perfectly appointed to suit modern tastes. Guests have half a dozen lavish apartments to choose from, and there are a good many singles and doubles too.

Inside the hotel, delightful historical elements emerge at every corner. Seventeenth century murals have been uncovered in the halls, whilst coffered wooden ceilings from even earlier adorn the conference rooms. Down in the atmospheric medieval cellars, an enticing restaurant and bar await. There gastronauts can enjoy a banquet of Polish and Italian cuisine. As it goes, the palace has seen its fair share of banqueting. When Poland saved Vienna from the Ottoman invasion in 1683, victorious King and Commander Jan Sobieski celebrated in this very building.

The hotel in fact takes its name from the Boner family, a distinguished dynasty that owned the property during the sixteenth century. They were valued advisors to the king, eventually ennobled for their services to the crown. A hundred years ago, the flamboyant figure of Feliks 'Manggha' Jasienski had an apartment in the palace. Besides being amongst the greatest patrons of Polish art, he was head over heels in love with Japan. He liked nothing more than to parade around on his balcony, dressed in a vintage kimono. Some of the most colourful characters from Poland's fin-de-siecle dropped in on the eccentric collector. (Today, the collection is housed in the Manggha Museum).

All in all, Palac Bonerowski is an intriguing addition to Krakow's hotel scene. Well worth a try if you want to stay in the heart of the city.