All Saints' Day and All Souls

On November 1st and 2nd, virtually the entire country decamps to cemeteries across Poland. Day and night, candles and flowers are laid on the graves of the departed. This may sound like a pretty heavy scenario, and not the kind of thing that foreigners might want to investigate. But if you're new to Poland, this is a moment that's not to be missed. There is a morose side to All Souls and All Saints, but there is also a strong element of magic. Foregoing All Saints would be like travelling to Seville and skipping the famed Easter processions.

As it happens, Krakow is one of the most evocative places in Poland on All Souls. The former Royal Capital has many beautiful old cemeteries, and these come into their own in the first week of November.

Step through the Gothic gateway of Rakowicki Cemetery as night falls and you'll find yourself in a parallel world. Thousands of candles in transparent, coloured vases gather on graves and at the foot of memorials. Priests singing psalms wander the paths, clouds of incense wafting over their shoulders. Fresh flowers adorn every corner. It feels like you're walking through a sort of lagoon of glowing colours. All about, there's a hushed, respectful atmosphere - it's an incredibly dignified tribute to the departed. 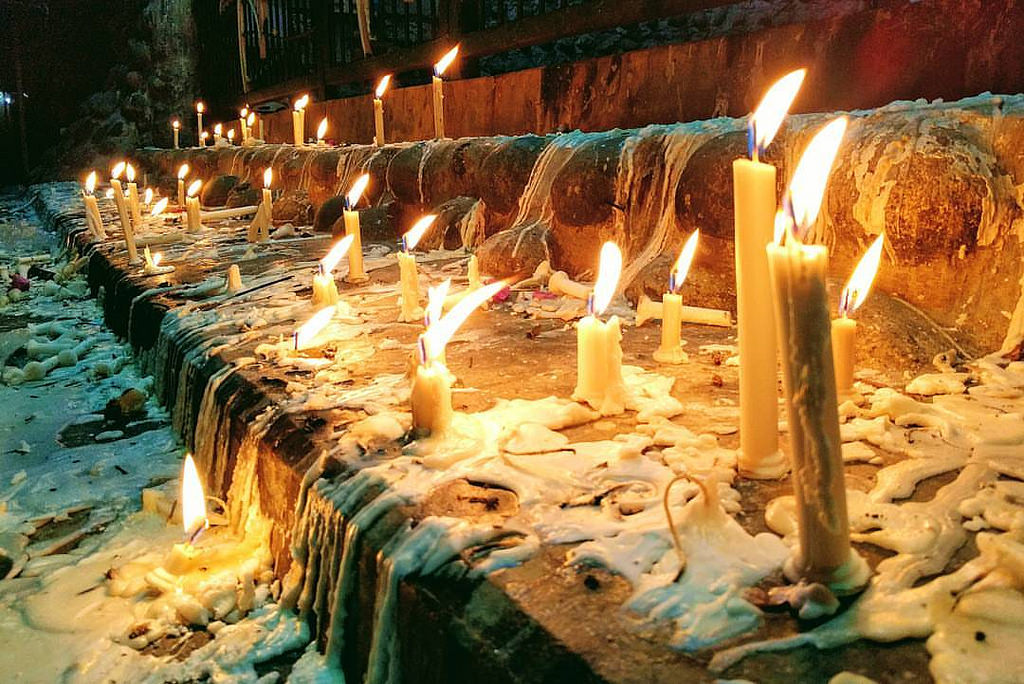 Rakowicki makes an especially powerful impact, as the majority of the graves stand up as works of art in their own right. Like Paris's Pere Lachaise, this nineteenth century necropolis holds the tombs of many great historical figures. Mausoleums of illustrious families stand side by side with the tombs of artists, soldiers, philosophers and men of the cloth. Memorials to some of the major dramas in Poland's history - uprisings during the nineteenth century occupation, the 20th century wars, the communist persecution campaigns - have rivers of candles flowing from them by November 2nd.

If you're in Krakow, an inspiring alternative to Rakowicki is the hillside graveyard at Salwator. Again, this beautiful cemetery houses the tombs of many distinguished Poles, and it has a fantastic view over the surrounding valley. To get there, take tram no 1, 2 or 6 to Salwator - the last stop on the line - and walk up the hillside road of ul. Sw. Bronislawy. It's actually walking distance from the Market Square if you enjoy a good stroll. Likewise Rakowicki. Take tram number 2 north to the end of the line and follow the crowds - you won't be alone even if you walk there at three in the morning. Families wander the illuminated paths late into the night, and if you spot an owl or a raven, you can be sure that you've encountered one of the departed souls... Suffice it to say that Poles love Gothic melancholy. 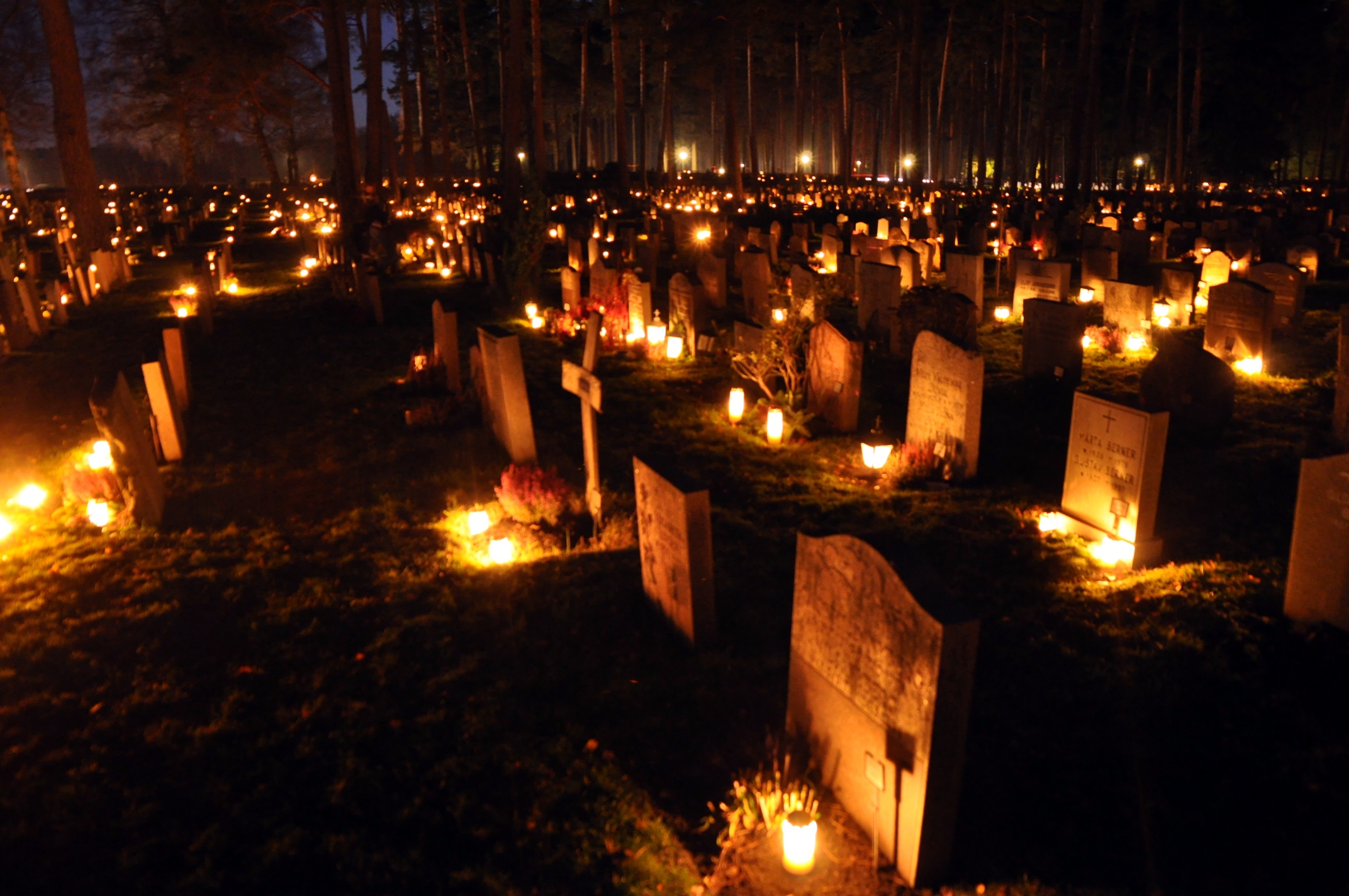 Visitors may well be curious as to where this tradition actually came from. As it goes, the custom of All Saints is now firmly intertwined with the Catholic Church, but it has its roots in pagan traditions. In the historic lands of Eastern Poland there was a custom called 'Dziady' (Forefathers) that fell at this time of year. Poland's most cherished poet, Adam Mickiewicz (1798-1855), made this the key feature of his play of the same name. As was the norm with the Church, the Pope endeavoured to absorb the tradition into the Catholic calendar. All Saints and All Souls fall one after the other.

For those with a penchant for the Gothic, don't worry if you're not arriving in Krakow until the following weekend - you haven't entirely missed the boat. The candles burn on for many days after the holiday has passed, so there's still a chance to savour the magic.

Hello There. I found your blog using msn. This is a very well written article. I will make sure to bookmark it and come back to read more of your useful information. Thanks for the post. I'll definitely comeback.

It is very important celebration for my family. Every year we visit graves which are situated 400 kms from my home. By that we have a chance to meet and share our memories about the people that passed away.

The devotion to All Saint's Day and All Souls is an inspiration for one and all. Please take care and appreciate you dear people !

All Saints and All Soul Days are my favourite Catholic tradition celebrated in Poland. The cemeteries doesn't look so empty and sad for those two days in whole year. Candles are looking amazing,especially at night time.

Our Polish community in New Britain CT (USA) has been following the same tradition on ALL SAINTS days. We decorate the tombstones with flowers and candles and a procession to the cemetery is comprised of thousands of people to process to the cemetery for an open air mass ( which was held today.) Having lost both of my parents & in-laws and following the tradition as I have done since I was a young child, this tradition of showing respect for those who have died remains a tradition unique to our Polish culture.

This is one reason I will have my ashes buried next to my wife in Golina, Poland. At least someone will remember me and visit once in a while.

My father Sgt John Rae RAFVR 148 Squadron rear gunner on JP162FS-S is buried in the Commonwealth Section of Krakow Rakowicki Cemetery along with many of his squadron who lost their lives on August 4/5th 1944 while on a mission to drop supplies for the Polish people in Warsaw. The tradition of lighting lanterns is a beautiful and very moving one and I find it very comforting to know that complete strangers take time to remember these men. I visited Rakowicki several years ago. To the people of Krakow Thank you for your kindness

This is a beautiful tradition!But it does make me curious... Do you celebrate All Hallows' Eve (or Halloween) in Poland? And what does that look like? Thanks!

I agree with Tomasz. The review is good, but the word 'magic' brings to mind some kind of Disneyland aspect to the event. I've just been at a graveyard (was also there last evening) and the atmosphere is of devotion to the dead and also to God and the Saints. Saying that, outside of today Polish society can be somewhat morose.....

Dear Author, please remember that All Saints is not the Polish version of Haloween. To my mind, the words like 'magic' or 'morose' do not accurately describe the atmosphere of this holiday. I would even venture to say that the opening of the text is slightly disrespectful. I think I understand the intention of the Author, who wished to make it easier for a foreigner to understand the essence of people flocking to cemeteries across the country. It is true that many Poles go there for a show but lots of us feel special connection with the departed on this day.

i understand what you're trying to say but you need to keep in mind that many other cultures celebrate a similar holiday all around the world, in different ways. Even 'halloween' all hallows eve or as it was originally known: 'Samhain' is celebrated by pagans and wiccans and many people who celebrate it in order to pay respect to the dead. Also Mexico's Day of the Dead is an important time. The tradition of wearing costumes goes right back into ancient times. Even Poland has special costumes that they wore in old Slavic culture. Although calling something 'magic' has a much broader use than what you understood the writer to mean, In the literal sense - much of this holiday was and is actual celebrating magic in the world - even in Poland. Well before the Catholic traditions, these days were literally to celebrate magic, life and death. It was serious and it was also fun. It was, and is, ritualistic, both sad and joyful. Although many people do go crazy and do weird stuff and also party, American, and American TV isn't an accurate representation of the entire world outside Poland, or even the so-called 'western-world'

The devotion to All Saints' Day and All Souls is an inspiration for one and all. Please remember the Polish Forces at Monte Cassino as well, Italy and those who made a supreme sacrifice. Lest we forget

wow..i like the story of your all souls day and all saints day!!

I really enjoyed learning about how to sprout alfalfa beans.