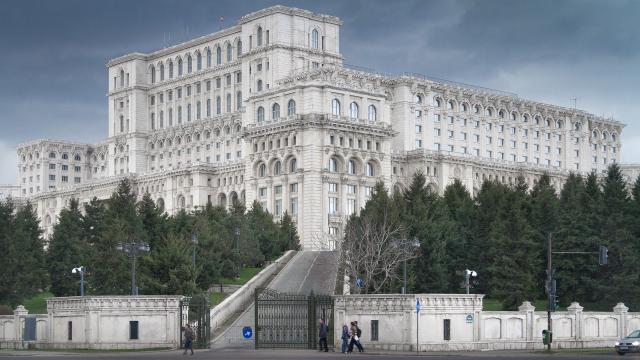 "Palatul Parlamentului 1b" by Mihai Petre - Own work. Licensed under CC BY-SA 3.0 via Wikimedia Commons

The Palace of the Parliament in Bucharest, Romania, was listed in BBC Travel’s list of world’s most impressive structures out of the public eye. The special ranking included a total of seven unknown architectural wonders, including the Great Wall of India and Derawar Fort in Pakistan.

This impressive neoclassical building has 12 stories and some 3,100 rooms covering 330,000 sqm. It’s worth pointing out that one-fifth of central Bucharest including more than 30 churches and some 30,000 houses had to be razed to build the palace.

The Palace of Parliament (Romanian: Palatul Parlamentului) in Bucharest, Romania, is a multi-purpose building containing both chambers of the Romanian Parliament. The Palace is the world's largest civilian building with an administrative function and the second largest building in the world after the Pentagon in the United States. It is also the most expensive administrative building and heaviest building.

The Palace was designed by architect Anca Petrescu when she was only 28 years old. It was nearly completed by the Ceaușescu regime as the seat of political and administrative power. The structure of the building, and construction itself was planned at "Proiect Bucuresti" the main institution of Civil Engineering in Bucharest. The chief of the project was engineer Valentin Georgescu. Nicolae Ceaușescu named it the People's House (Casa Poporului), also known in English as the People's Palace.