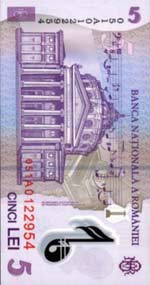 Credit cards are becoming more and more popular in Romania and can be used in most major supermarkets and hypermarkets, hotels and some restaurants. Though don't be surprised if you're paying with plastic at a supermarket that the clerk and those around you will be none too pleased. Paying with a card generally takes a long time and slows everyone down. Thanks a lot, jerkface.

Romanian currency is called the leu (plural lei), meaning 'lion.' And it's some of the coolest money ever. Not only is it plastic, and therefore can't be torn or crumpled, but it actually gets collected and washed every so often (literal money laundering!).

The leu underwent a major change in 2005 when 4 zeros were nipped off the end of the national currency. The new leu (RON) is therefore valued at 10,000 old lei (ROL). Before this revaluing occurred, the leu actually had the dubious distinction of being the least valuable currency in the world from January 2005 (when the Turkish lira cut 6 zeros) to July 2005. Today the revaluation may still cause some confusion to visitors when prices are sometimes verbally quoted as "100" (meaning 100,000 old lei), rather than "10" (new lei).

Lei come in denominations of 1, 5, 10, 50, 100, 200 and 500. The coins are called 'bani' (pronounced 'bon') and come in denominations of 1, 5, 10 and 50 bani coins. The worthless 1 ban coin is a rare sight, and most shopkeepers round up to 5 bani in practice. Also, don't be surprised to get pieces of gum, candy or tissues instead of exact change; that's pretty standard procedure in these parts.

At the moment, the leu is worth about .30 Euro cents. Romania is scheduled to adopt the Euro no sooner than 2014.

You shouldn't have any trouble at all finding an ATM in Bucharest. There are banks everywhere, all of which have ATMs; in fact, one bank in Lipscani has four ATMs out front. All of the city's arrival points have a cash machine except for the dubious bus station. As always, be careful with your money, don't count it in public, don't keep it where pickpockets can get to it and don't wave it around with your buddies, getting excited about how cool the little clear window in the bills is. And as it can occasionally be difficult to exchange lei out of the country, try not to withdraw more than you need.

You can leave your chequebook at home - you won't get any currency out of it here. Similarly, traveller's cheques are a notorious hassle to exchange. Though we've seen some people have success, we don't recommend you try and use them here.

The party line on exchanging money in Bucharest is do it at a bank. Most banks offer good, comparable rates, so any bank will do, though you may have to wait in line for quite a while. Exchanging money at the airport is to be especially avoided.

is there any fee charged for forien cards using ATM? other then the fees I should pay to my Israelien credit card company?

it seems that all remarks made here are biased and focused on the bad parts of Bucharest, instead of seeing the full part of the glass. There are many beautiful parks, theatres (at affordable prices-not movie theatres...real plays...for real people). The stores are clean and the people are at least nice to travelers.