Romania's capital and the industrial and commercial centre of the country - Bucharest lies in the southeast of the country on the Dambovita River. With a population of roughly 2.5 million and an urban area of only 226 square kilometres (87 sq mi), Bucharest has the dubious distinction of being the densest city per capita in the EU. Easily the largest city in Romania, Bucharest is actually the 6th largest city in the EU by population.

Despite the etymology of its name meaning "City of Joy," Bucharest hasn't exactly had an easy time of things as anyone who's had a look around might be able to quickly surmise. It's history has been one of alternating periods of development and decay from its first settlement on to today. Here's a roughshod run-down of the city's calamitous history:

By European standards, the city is not an old one. First mentioned as the 'Citadel of Bucharest' in 1459, the settlement began to grow in size and stature when Wallachian prince Vlad III the Impaler made it his residence. With the establishment of Curtea Veche (the Old Princely Court) by Mircea Ciobanul, Bucharest began to compete with Targoviste to become the region's capital. Despite being burned down by the dastardly Ottomans and abandoned by the princes at the beginning of the 17th century, Bucharest was quickly rebuilt and continued to flourish with today's Lipscani district becoming the commercial centre of the entire of Wallachia.

During the 17th and 18th centuries, Bucharest was battered by a number of cruel natural disasters and wrested back and forth too many times to reproduce here between the Ottomans, the Hapsburg Empire and Imperial Russia. In 1813-14, the population was ravaged by Caragea's plague and, as if to catch up, a third of the city's buildings were immolated by fire in 1847.

Despite the general mood and state of things, Bucharest nonetheless became the nation's capital when Wallachia and Moldavia were united to form the Principality of Romania in 1861. In 1881, Buch became the political centre of the newly-christened Kingdom of Romania and the boom was on. The extravagance in the arts and architecture that occupied Bucharest in the late 19th century, in addition to its elevated cosmopolitan culture (and presumably its almost French snootiness), earned the city the title of "Little Paris" or "Paris of the East."

The high times, however, weren't to last (do they ever?) as war broke out across Europe and Bucharest was occupied by German forces for two years between 1916 and 1918. During this time the capital was moved to Romania's second-biggest (and somehow even less appealing) city of Iasi. After the war, Bucharest became the capital of Greater Romania and made the mistake of siding with Germany and the Axis powers during the Second World War. As a result it was bombed extensively by Allied forces until a royal coup redirected Romania into the Allies camp. Extensive bombings by Germany's Luftwaffe were the payoff and on November 8, 1945, (the king's birthday), the Soviet-backed Petru Groza government suppressed pro-monarchist rallies and took the country's helm.

At this point Bucharest swung out of decay and back in the direction of development, albeit in the worst way possible. Nicolae Ceauşescu's reign (1965-1989) orchestrated the demolition of the most historic parts of the city, and replaced them with typically Communist, unconditionally concrete crimes against aesthetic decency (namely high-rise apartment blocks). The best examples of this can be seen around Piata Unirii where a entire historic quarter was levelled to make way for Ceausescu's Centrul Civic (Civic Centre) and the incomprehensibly inane Palace of the Parliament, his would-be future residence (and coincidentally the second-largest building in the world). In 1997, an incredibly severe earthquake (7.4 according to Richter) claimed 1500 civilian lives and even more old buildings, making room for more of Ceausescu's maniacal urban visions.

Feared and loathed in equal measure, the mess Ceausescu had made of Romania's economy and formerly glorious capital finally led to the mystery-shrouded Romanian Revolution of 1989, whereby the Communist regime was overthrown and the Ceausescus executed (on national television no less). The National Salvation Front, composed of former soviet party politicians (whose role in orchestrating the 1989 Revolution is to this day unclear), slipped into office and a whole lot of nothing really changed, leading to further protests which were put down violently. Former communists and political protests were the order of the day until a centrist government came into power in 1996.

Bucharest is again became a bustling boom town in the 21st century as the city undergoes a period of urban renewal, modernisation and an economic upswing. Significant (and much needed) restorations are now taking place all over the city thanks to the plug of EU funds the country received upon ascension into the vaulted Union in 2007. 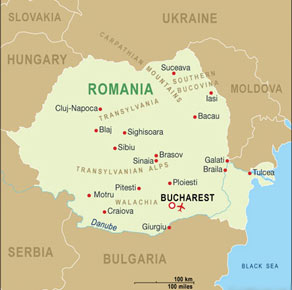 Romania, as we assume or wish to assume you already know, is a country in Southeastern Europe bordering Hungary and Serbia to the west, Ukraine to the north, the Black Sea to the east and Bulgaria to the south. It is populated primarily with Romanian-speaking Romanians.

Romania first became a nation-state in 1859 with the territorial merger of Wallachia and Moldavia. It's independence was recognised in 1878 and several border changes would ensue over the 20th century. In 1918, following the close of WWI, Transylvania, Bukovina and Bessarabia (otherwise known as today's oft-forgotten Republic of Moldova) were incorporated into Romania, however the Moldovan territories were soon stripped away from it when they were occupied by the dastardly USSR after WWII.

As hinted at above, Romania was led by an insane megalomaniac named Nicolae Ceausescu for 25 years, whose style of communism was more similar to North Korea's Kim Jong II than the rest of Eastern Europe. After the most violent overthrow of communism to take place in Europe, Romania wasn't exactly the fastest former communist country out of the gates. A series of slow-developing economic, political and social reforms did eventually lead to its joining the NATO alliance in March 2004, however, thanks to its location and coastline looking like a handsome place for air and naval bases. The country's failure to push ahead quickly enough with reforms left Romania off the list off new EU members that same year - a list which included most of Eastern Europe. However, in April 2005 Bucharest got the blessing to sign the EU accession treaty and managed to sneak into the clubhouse on January 1st, 2007. Romania has the 9th largest territory in the EU, the 7th largest population, and the largest inferiority complex of all member states.

Do kids live in sewers?

Romania strikes me as a very under-appreciated country . I've met several Romanian people and they are all quite sophisticated yet extremely down-to-earth. Quite different than some other East Europeans I've met. A certain Romanian woman whom I recently met is a big reason why I've developed a strong interest in this country and its culture. I'm enjoying the experience very much and hope to go there soon.

Romania is a nice country with nice people to match. Beautiful and a lot of history. I want to visit again maybe a month this time.

I think Dana has a great knowledge of history

going to Bucharest in may 2014 , looking forward to it. first time I will have been to an eastern part of Europe

Seriously? I just read Dana's comment and now I am mad! I just freaking revolved half my project around this! HATE YOU.

the text is full of errors: bucharest was not first mentioned in 1459, this is a common and stupid mistake - the oldest document still preserved till today comes from that year - cant't u see the difference?!? King's birthday is 25 oct, not 8 nov.... The Parliament was not supposed to be the residence of Ceausesc but an administrative building. and there are many more errors but.. why bother?!