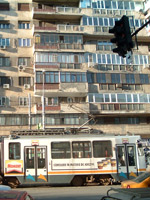 Above: What a green city! Below: Take a cab to Europe's ugliest Christmas tree (also not green) 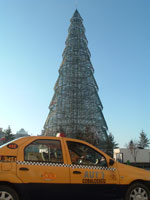 Bucharest's subway has been accused of being the nicest thing the city has to offer. New, modern, smooth and efficient, it's a pleasant ride despite being overcrowded. The metro system is also pretty simple and straightforward, so you should have little trouble sussing it out. You can even take it out to the airport. Tickets need to be bought in the underground stations and your options are as such: 2 rides for 2 lei or 10 rides for 7 lei (cheap!). Put your ticket in the slot, wait for it to come back out and off you go, but only until 23:00 when they stop running. 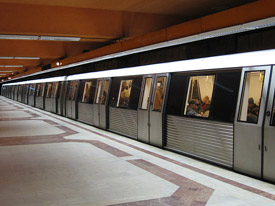 By bus and tram and trolley

Bucharest's buses are on par with the subway in terms of modernity and comfort, and for being terribly overcrowded. (Bad traffic generally make the subway a better option.) Most of the city centre is served by these sleek machines which unfortunately only run until about 23:00. Trams and trolleys on the other hand can be excruciatingly slow and antiquated, and likewise stop running by 23:00. In fact, there's really no reason to be on one. The ticketing system for all three is the same: buy a ticket from a nearby kiosk (most busstops should have one) and punch it in the onboard ticket punching machine. Tickets are cheap (1.10 lei); much cheaper than getting caught by one of the all-too-frequent ticket checks and resulting fine (40 lei).

Bucharest cabbies are generally amiable and honest, providing you're employing the services of a professional company and not one of many profiteering privateers. Bucharest's bonafide cabs are all painted yellow and (should) have their prices posted on the door (generally about 2 lei/km or less). Call rather than flag one down and always make sure the metre is running before setting off. Taxis are a sound option, particularly after 23:00 when the buses and subway have stopped running. Many an endless night of drunken wandering in search of the bed we woke up in have been avoided by calling one.

Bucharest has more cars than any other city in Europe. This may be largely to do with the fact that cars are a major status symbol in Romania and something everyone aspires to have. [The lack of Dacias and wealth of Mercedes and Porsche SUVs on the road will attest to this.] As such, we strongly discourage you from adding to the city's commuter congestion by having a car here. Should you disobey our advice, you can look forward to not just bad roads, ubiquitous traffic jams and dodgy drivers, but also obnoxious, ceaseless and senselessly whistle-blowing policemen commanding you to make manoeuvers counter-intuitive to the logic of the traffic lights. Have fun. As for parking, anything goes as far as we can tell.