It seems that Cracow Life isn't the only "Life" that's depicting Cracow anymore, as the city now has a virtual counterpart on the World Wide Web. Cracow's other life comes in the form of the popular online game Second Life, a virtual world on the Internet where "Residents" interact with each other through avatars, socialize, buy and sell goods and services, and even fly. In the game, a Resident can take a stroll around Cracow and see sights like St. Mary's or the Sukiennice, take a horse carriage around the Rynek, and even buy a pretzel. In the future, visitors will be able to have a meal at a restaurant on the square or purchase an apartment, though thankfully for much cheaper than in the real world. While the lack of tourists and pigeons (there are only a few, as well as two cats) is a tempting alternative to actually going out to the Old Town, somehow we doubt virtual beer tastes the same as sipping a Zywiec on the Market Square. 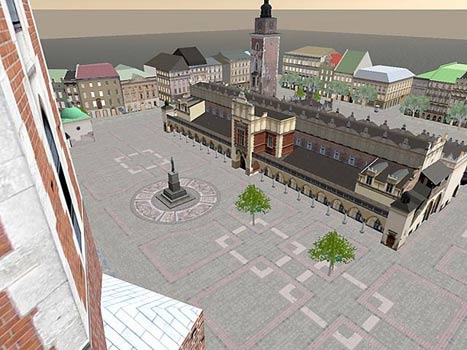 Above: If they wanted to be super-realistic, there would be constant construction there as well

The fact that Cracow was duplicated as a virtual city on Second Life is significant in itself, as until now the only other European city in the game was Amsterdam. Cracovian graphic designers have been working on the replica of the Market Square since last year, which shows in the accurate details of each building (though it makes you wonder why Polish graphic designers have so much spare time). But the virtual Cracow won't just be a passive attraction to online sightseers; just like the real Cracow, there will be always something going on in Second Krakow, such as live concerts on a virtual stage in front of the virtual Town Hall. The designers have even spoken with the city government about broadcasting (or webcasting) events and concerts in Krakow in real time on Second Life.

Though Second Life has over eight million users from around the world, it's still in its developing stages, with users realizing new potential money-making, as well as educational and cultural, tools daily. So while the developers of Second Krakow are certainly innovators, there's no doubt that soon other cities will follow in their lead. Nevertheless, they were one of the first to realize the promotional potential of the online gaming universe, and other Polish cities are scrambling to duplicate their realities in the virtual world: Wroclaw, Zakopane, Warsaw, Poznan, Gdansk, Sopot, and even Katowice are all forming their virtual streets and monuments on their own city islands in Second Life. Together, all of these islands will form an online Second Poland. But in the end, the goal of the developers is for the virtual visitors to visit Second Krakow, find some information on the city, become enchanted and come visit Cracow in their first lives.

Second Life seemed boring after a few days of playing, it's amazing that people spend so much time on there, I wonder if they have first lives? This is a pretty hilarious spoof site: http://www.getafirstlife.com/ But seriously, Krakow on SL looks cool, but the real Krakow is... real.