Galloping Into Oblivion: Piotr Michalowski and the Napoleonic Dream

'Tell all the ladies' wrote Napoleon's flamboyant Marshal, Joachim Murat, after sustaining a pistol shot to the jaw, 'that even if Murat has lost some of his good looks, they won't find that he has lost any of his bravery in the art of love'. This swashbuckling spirit was to flavour countless paintings of the Napoleonic Wars, and indeed, few conflicts have been so widely chronicled by artists, and few as romanticized. The familiar scene of a troop of moustachioed gentlemen, galloping across the battlefield, decked out in gold braid and sabres twirling - ready to give the enemy a damn good hiding - crops up again and again in paintings of the era. These pictures are often thrilling to behold, yet few artists followed the more unsettling route of a figure such as Goya, whose candid depictions of atrocities offer more stark insights into the age.

At first glance, Piotr Michalowski's paintings in Cracow's Cloth Hall may appear to belong to the former, tally ho category, and one could easily breeze past them without a proper look. Here we see those gallant fellows, parading before the high command, or storming through infantry regiments amidst the billowing smoke of artillery fire. Also there are a few mediocre portraits of the Emperor Napoleon, rearing up on his horse Marengo, whilst the most famous work of all, the Charge on Somosierra, itself appears somewhat nebulous at a first impression.

However, on closer inspection, Michalowski's extraordinary talent starts to become clear. And armed with a few small insights, his paintings begin to resonate with a power that transcends the artist's virtuoso skills with the brush. This 'amateur' was one of the outstanding painters of his day. 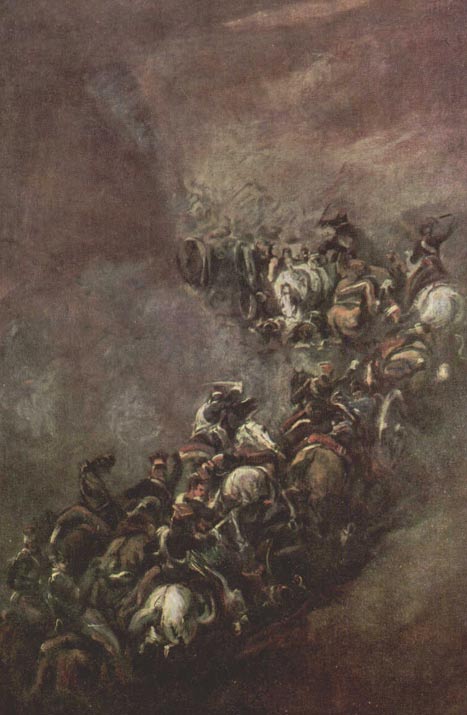 (Above) 'The Charge On Somosierra', (106cm x 71cm), by Piotr Michalowski. From the collection of the Cloth Hall Gallery of Nineteenth Century Polish Art, National Museum, Cracow

Polish history can be a foggy world to those who are not from that country. However, to the uninitiated, a clue to understanding Michalowski's preoccupations can be found in the northern part of his room in the Cloth Hall. There, facing his scenes of Napoleonic valour, are a series of portraits of peasants, jews and other characters from his estate in Austrian Poland. Amongst these works - and he was the first Polish artist to treat these men with the dignity that had previously been reserved only for kings and nobles - are two portraits of a veteran of the Napoleonic Wars. They were painted in 1846, over twenty years after Napoleon set sail on his final journey to St. Helena, that strange island in the middle of the Atlantic Ocean.

The face that beams out of these smoky, ethereal portraits is a kindly one, and there is an intimacy and informality that feels natural and relaxed. The old veteran emerges from the dark background with a soft, luminous presence - much like Rembrandt, who the Polish artist greatly admired. There is a deep melancholy in the old man's face - he seems lost in thought. One wonders what the old veteran might have witnessed that had caused such sadness. However, in Michalowski's eyes, the matter was quite straightforward.

In the Summer of 1796, four years before Michalowski's birth, the young general Napoleon Bonaparte swept up through Austrian governed Italy in a conquest that stunned Europe's old guard.

The cat was amongst the pigeons, and it was not long before Bonaparte was joined by two legions of Poles, who were more than happy to fight the Austrians, who, alongside Russia and Prussia, had dismembered their country the previous year.

'I like the Poles' Napoleon professed at Verona, 'the partition of Poland was an iniquitous deed that cannot stand. When I have finished the war in Italy I will lead the French myself and will force the Russians to re-establish Poland'.

Thus began the Poles uncertain odyssey with Bonaparte, the subject that was to haunt Michalowski throughout his life. There were setbacks and disasters from the start, and it was not until 1806 that Napoleon crossed onto Polish soil. What is more, many influential Poles had been uncertain of Bonaparte from the beginning, and not without reason. Yet the arrival of Polish and French troops in Prussian-run Poznan and Warsaw, and later Austrian Cracow, was enough to inspire the majority.

'The whole of Poland is arming,' Napoleon wrote in December 1806. 'It is hard to conceive the national movement in this country? Priests, nobles and peasants - all are of one mind.'

Michalowski was a young boy of seven when Napoleon established the Duchy of Warsaw, which was created from the reconquered Prussian lands of the Kingdom. Two years later, Prince Jozef Poniatowski seized Cracow from the Austrians - for the Poles it was one of the highpoints of the age - after decades of humiliation it seemed that finally they were back on a winning side.

It is not difficult to imagine how these events would have captured the heart of a patriotic young boy. Michalowski, the son of a nobleman, had been born and bred in Cracow, and he was nine when Poniatowski liberated the city from the Austrians. (A spirited yet unspectacular painting of the event, by Stachowicz, can also be found in the Cloth Hall.) The legendary general, Henryk Dabrowski, the hero of Poland's future national anthem, lodged with Michalowski's family during this period. For a while, a new dawn seemed possible - but Poland's luck was not to hold.

The turning point was the 1812 campaign, which Napoleon referred to as his second 'Polish War.' With the reconquered Russian lands, Poland would have recovered virtually all of her former domains. Some 98,000 Poles flocked to the cause, and they were to serve the Emperor with distinction. However, only 26,000 frost-bitten soldiers made it back to Warsaw in December 1812, and many perished from illness thereafter. It was the beginning of the end - not only for Bonaparte, but also for Poland.

Piotr Michalowski, who came of age with the passing of Napoleon, painted scores of pictures on the conflict. Perhaps his most trenchant work on the era is the aforementioned 'Charge on Somosierra' (1843). A little over a metre in height, with a powerful vertical axis, it depicts a legendary cavalry charge that took place in Spain in November 1808. This was the event that cemented the reputation of the Polish Light Horse, who were the creme de la creme of Napoleon's Polish troops.

The Polish Light Horse, who later became the Lancers of the Imperial Guard, were raised from the ranks of the Polish gentry. They were the natural heirs of the Husaria, the 'Winged Horsemen' who had been the scourge of the Middle European battlefield during the sixteenth and seventeenth centuries. It was the Husaria who had scattered the Sultan's army during the Relief of Vienna in 1683, and it was events such as this that had given the cavalry a mythical status in the Polish imagination - a status which Napoleon's lancers would add to immeasurably.

The Charge on the Somosierra Gorge took place during the early days of the regiment. Bonaparte had been held up at the defile, which was one of the final hurdles on the path to Madrid. Breaking the Spaniards hold on the ravine was proving nigh on impossible. Finally the Poles were called on to charge.

A lone squadron of 125 galloped up the valley - over half perished. In the process the Spanish position was decimated, and the entire army was able to advance onwards. Napoleon was so struck by the valour of the Poles that he ordered the whole Imperial Guard to salute the regiment on their return - they were immediately upgraded to the highest rank of the Guard. The charge was the first of many famous acts by the Poles, and the lancers themselves would fight with Napoleon until his last stand at Waterloo in 1815 (a squadron even accompanied him on his exile to Elba in 1814).

Michalowski painted numerous equestrian portraits and battlescenes, but the Somosierra pass was a subject that captivated him especially. He made several sketches and paintings of the event over the years, some of which he painted over or abandoned - he was an inveterate perfectionist, in spite of the fact that he was only an amateur painter (for much of his life he was involved in public office, and in helping to run his family's estates). The actual Cracow work itself was intended as a precursor of an even larger canvas. Michalowski spoke in great detail with veterans of the regiment, and at one stage he even planned to visit Somosierra itself. However, the visit never did materialize - not that this matters - as it is the symbolic nature of the painting that really counts.

Unlike several interpretations of the charge by other artists, where every soldier and every detail is rendered with photographic precision, Michalowski strips the canvas of all extraneous elements. Instead, the charge presents itself as a dream-like flash. The dark background, and the imperceptibility of much of the landscape itself, heightens the sense of focus on the charging soldiers themselves, who tear through the ravine like a hurtling train. The Spaniards are barely discernible in the background, and only the faint silhouettes of some guns and a few bobbing heads suggest the enemy itself. What's important to Michalowski is the act - and not the details of it.

Indeed, when compared to the work of other artists, Michalowski's soldiers appear to be painted in a very free manner. It is not possible to identify individual officers, who swirl and shimmer with the blurred haze that comes with high speed action. Yet each figure is painted with an extraordinary and exquisite mastery of the human form, a mastery that can also be found in the horses. And these men are not painted in conventional poses, they are rendered in all manner of contorted positions - the kind of extremes that are only to be found in extraordinary situations such as battle. Some are being thrown from their mounts, others strain to maintain their grip, yet Michalowski handles this panoply of varied poses so deftly that it all appears completely natural and uncontrived. So convincing is the sense of blistering movement, that the line between frozen and actual movement becomes a fine one.

The stripping away of peripheral detail, and the absence of anything discernible on the horizon, was surely not accidental. The Poles seem to be charging into a kind of oblivion. And this painting, which was composed in 1846, at a time when Polish prospects were bleak, expresses that perfectly. In 1846, thirty years had passed since the Napoleonic dream was snuffed out, and fifteen since the doomed November Uprising against the Russians (which Michalowski himself had helped to organize). For all the glory of the past, things did not look rosy.

After a pioneering Renaissance, the Poles had made a mess of self government during the seventeenth and eighteenth centuries. And when they tried to reform it was too late. The Napoleonic age was a time when they tried to reclaim their honour. Whilst their dreams for independence were not realized in that generation, their valour on the battlefield, and their discipline off it, won the respect of friends, and, more tellingly, of their foes. Along with the great Romantic poets of the era, Michalowski was one of the outstanding talents to give expression to the legacy of that age. Independence was denied them, yet the Poles could at least cling to the honour with which their nation had acted. With the coming of Romanticism the events soon passed into legend. 'Men, horses, arms and eagles day and night/ Flowed on, the sky glowed with a fiery glare/ Earth shook, and there was thunder everywhere.'