The National Museum in Krakow 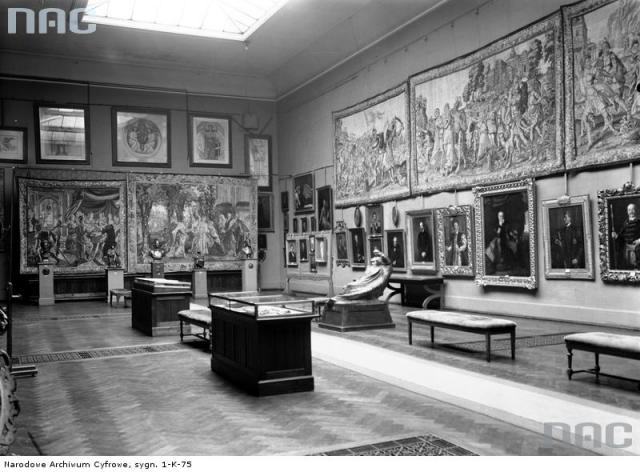 Krakow has an embarrassment of riches on the museum front. But before we get into some of the highlights, you might wonder how so much treasure got here in the first place? Well, it's not simply because Krakow is the former Royal Capital. It's also because when museums first came into vogue in Europe, Poland only really existed as an idea. The country had been wiped off the map in 1795 by Russia, Prussia and Austria, and thereafter, presenting patriotic material was not at all easy. Poland's oldest collection, belonging to Czartoryski duchy family had to flee to France with its owners in 1831. But thankfully, all was not lost.

In 1873, the Austrians gave the Poles a free rein - much to the annoyance of Russia and Prussia. Henceforth, the Habsburg kingdom of Galicia became the most flexible place in the former Polish lands to launch a patriotic enterprise. Krakow immediately took the lead, aided by the fact that many Polish nobles had property in the city. The nobility wanted to turn Krakow into a giant open-air (and indoor) museum of Poland's history. The jewel in the crown was to be the former Royal Castle - officially returned to the nation in 1905 after a dismal stint as an Austrian army barracks
In the meantime, four museums had been launched or relaunched - the Czartoryski collection the Hutten-Czapski, the Matejko House and the Gallery of Polish Art - all of which are now under the wings of the National. More branches were added after Poland regained her independence in 1918, including a massive modern building for the main branch. As it was, Krakow's material heritage managed to survive the Second World War in better shape than most Polish cities, and today the visitor can enjoy the accumulation of centuries of heritage. A brief guide to the National Museum's tremendous collections follows below.

The Bishop Erazm Ciolek Palace is magnificent historical townhouse hosting two permanent galleries: the Art of Old Poland of the 12th-18th Centuries and the Orthodox Art of the Old Polish Republic.

The first outlet of the National Museum in Krakow. Opened in the Cloth Hall in 1879. The Gallery of 19th Century Polish Art is opened from Tuesday till Saturday from 10 a.m. till 8 p.m. and on Sundays from 10 a.m. till 6 p.m. There is also a cafe with a breathtaking view, available seven days a week from 10 a.m. till 11 p.m.

Jan Matejko's swashbuckling paintings were designed to uplift hearts during the long era of occupation. He became a national treasure, and an inspiration to scores of younger artists. Matejko lived at this house for many years, and the interiors have changed little since the museum opened in 1906.

After major renovation works in 2012 the branch was rebranded from Wyspianski Museum to Szolayski House, and the scope of its exhibitions has been expanded. The branch is now a genuine hub of Art Nouveau art, with a robust collection of various art items of the period, mostly Krakow-made.

This mansion houses another of Krakow's lesser known treasures. Jozef Mehoffer was an oustanding figure in Polish art, highlights of who's work can be seen at Wawel Cathedral as well as at the Armenian Cathedral in Lvov. He lived in this fine Cracovian residence, which has been preserved much as he left it. The gardens were recently brought back to life to much acclaim.

A 19th c. hosts a private collection of antique Polish numismates, considered the greatest known in the world. The man behind the outstanding collection is count Emeryk Hutten-Czapski, a bibliophile, a collector and an art connoisseur, with a particular interest on Poland and its heritage. By his will, the assemblage of over 100 thousand numismatic pieces collected for 130 years, as well as his city residence were donated to the National Museum. The facility's attraction is also a beautifully restored, extensive garden.

Poland's greatest interwar composer lived at this villa for many years. Born in today's Ukraine, Szymanowski eventually settled in Zakopane in a lavished Zakopane style villa, Atma in 1930. In 2013 the museum underwent thorough renovation, and since then Atma has been a genuine local hub for music and other arts. Each year in summer the villa hosts performances of Karol Szymanowski Fesival of Classical and Chamber Music.

Official Web Page of the National Museum in Krakow

you should add things about the civil war

wtf? what civil war? you Americans should learn world history right, it's not all about U:/ there was no civil war in Poland only uprisings and occupation from other countries