Though an elegant building, and not the jewel in the crown of Kazimierzs synagogues, Remuh's historical resonance outstrips many of the others. Furthermore, it remains the only synagogue in Cracow that continues to function week in week out as an actual place of worship. 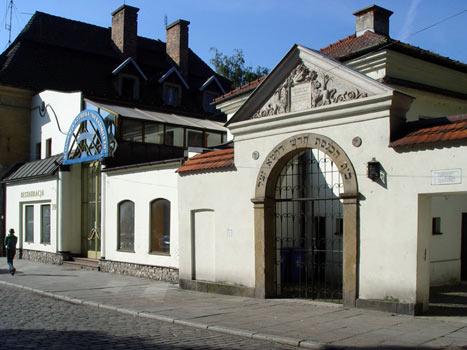 The synagogue was founded in 1553 by a prominent family who had been bankers to the king. It was the son of the founder, Moses Isserles, known as "Remuh", who gave the building its name. This brilliant figure was something of a Renaissance Man, being both an astronomer, historian, philosopher and geometrician (he was even reputed to have been a miracle-worker). Isserles's writings have had seminal influence on the Ashkenazi Jews right up until this day, and for these reasons his tomb, which can be found in the adjoining cemetery, remains a point of pilgrimage for Jews from across the world.

In spite of its small size, the Remuh synagogue, with its limestone walls and generous windows, exudes a light and airy feel. A dozen or so chandeliers drop down from the ceiling like golden spiders, shedding an added glow to many attractive features. Amongst these is an exquisite aron ha-kodesh, the "ark" in which the torah scrolls are kept. Although the synagogue has been rebuilt many times, this is the original feature, carved in 1558. And like all arks, it lies on the wall that faces Jerusalem, the holiest place in the synagogue. When not in use, the door is covered by a velvet curtain. All things considered, the understated beauty of this building may provide a welcome respite from the baroque extravagance that one finds in so many churches and synagogues in Cracow. Definitely worth a look, especially in the light of the beautiful cemetery that is attached.