It is said that the foundation of this cemetery came about in a rather unexpected manner. It is a curious tale. A house once stood in the place of the graveyard, a house that was indeed typical of those owned by the goodly folk of Kazimierz. One day, a Friday in fact, a young couple were married. As one might expect, spirits were high and much revelry was planned. A party ensued, with music, dancing and barrels of ale for all and sundry. However, a local rabbi was unimpressed by these antics, especially in the light of the approaching Sabbath. He warned the revellers to desist from their larks but they, carefree, paid no attention to the surly man. Finally, after the third warning went unheeded, and with the midnight hour drawing near, the rabbi vanished. In the blinking of an eye the house was sucked into the ground - and not one of the revellers was seen again. 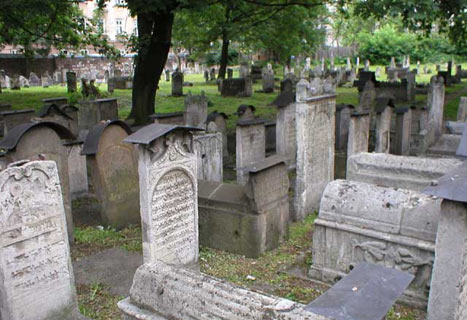 Sometimes graveyards lose their spiritual power if they become too neatly clipped and sanitised. The Remuh cemetery does not fit into this category, being both unkempt and wildly atmospheric. Quite often, even in Spring, you can arrive here and find yourself completely alone. Then the ground is enlivened by clusters of dandelions, and the sycamore trees provide a popular home for birds returning from their tropical adventures. The graveyard certainly has an abandoned feel to it. The northern wall - choked with weeds and full of holes - is propped up by planks of wood. However, this is not to say that it is not looked after, and the place is in safe hands.

Of course the most evocative elements of the graveyard are the headstones themselves, and there must be at least five hundred packed into this small space. Despite the fact that much of the lettering has faded their character is well preserved. Some of the stones date back to the mid-sixteenth century, when the cemetery was founded - by 1799 there was little space to accommodate new ones, thus you really feel like you are stepping back in time. Crouching down in front of the stones one finds beautiful flourishs in the workmanship. Lions, trees, snakes and other such motifs emerge from the blackened stone, whilst below it is still possible to decipher the ancient script.

It is somewhat miraculous that the graveyard has come down to us in any kind of form at all. Many stones were smashed by the Nazis and the only reason that a number survived is because they were buried by locals prior to an earlier barbarian invasion. However, the remains of the broken stones were not abandoned. Instead, after the Second World War, the fragments were painstakingly cobbled together to form a wailing wall. This can be found on the north eastern side of the cemetery, immediately on your right as you enter. It is a deeply poignant monument.

I think you might mean the New Jewish Cemetery which is along Miodowa to the east, just under the railway line.

Hi, Anna ... try the link to "Jewish Festival" in the right column.

After looking at your website, I started to look at the possibility of going to Cracow, and definitely visit the Remuh synagogue (my ancestor) and the cemetery. I would also like to see the Jewish festival. When will it be in 2010?

Looking up in the "Jewishgen.org" site I found the grave of "Perl Dukatenzeiler" at this cemetery. It is just my motherÂ´s surname. I would be very grateful if you could contact me with any of the relatives that certainly take care of her tombstone, which looks very tidy and looked after. Thank you very much! Ana MarÃ­a.