It's never easy to swim against the current, and so the first quality we should ascribe to the participants in this festival is bravery.

Poland never had a 'sixties' in the sense that America or England did. The Poles were stuck behind the Berlin Wall, and the Communist government did not acknowledge such a thing as homosexuality. That said, let's not just point the finger at the Communists, or the Church for that matter, the situation is more complex.

Indeed, whilst journalists in the West like to seize on stereotypes and whip up tales of oppression, there is more of a gay scene here in Poland than you might imagine. Some of the hippest clubs in Warsaw and Krakow are gay and generally you'll find a growing number of gay spots.

All the same, witnesses of tolerance marches in Poland will generally be struck by one thing - their solemnity. Poland is a long way from the Mardi Gras style shenanigans of Berlin or Amsterdam, and such demonstrations would probably prove detrimental to the long-term cause, which is surely to show that gays are not frightening people. (Sadly many of the anti-gay marches insist that all gays are paedophiles, which seems a bit like suggesting that all straight men are on the hunt for young schoolgirls - rather unfair). However, the Mayor of Krakow has officially approved the tolerance march (as he did last time), unlike in some other Polish cities, where attempts were made to ban them. Which brings us neatly to the current event, Krakow's 'Culture for Tolerance' Festival. 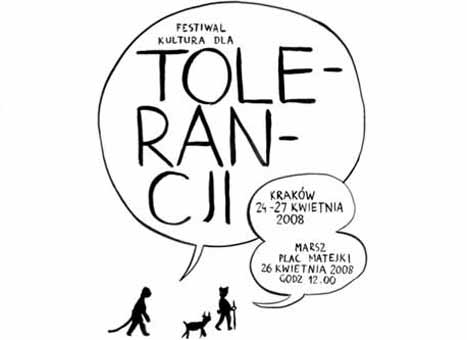 The 'Culture for Tolerance' Festival has a fine mixture of fun and serious stuff, including movie screenings, book launches and workshops. A focal point will be the march itself on Saturday April 26th, beginning at Plac Matejki. Staying on the serious side, there will be a visit to Auschwitz in remembrance of gay victims of the camps (estimates are in the tens of thousands). There will also be debates and lectures led by distinguished academics, with talks carrying such intriguing titles as 'Androgyny in Pop Culture'. To round things off there will be plenty of parties. Check the official website for more info.

Repling to peter comments as gay australian with polish background , dont blame the poles its more so religion any catholic dominated country is the same , I found no problem there , and if australia isnt any better .

I feel sorry for Gay people in Poland - the country seem shorribly intolerant. I would have thought that after all the terrible things the Poles have suffered under the Nazis and the the Soviet Machine, they would have learned to value freedom and right of expression more, amongst members of thier own community.

I'm happy to see that others are also supporting such initiative. It is a bit sad to see so many people against such festival that is here to celebrate one's choice and freedom. At Music@PL.PT, we also support this event. Hope to take part on it, on the supporting side. Cheers Romeu Music@PL.PT http://musicplpt.blogspot.com