Wroclaw Theatre goes Down Under

The Song of the Goat Theatre (Theatre Piesn Kozla) has its own studio in the heart of Wroclaw in Poland, in the refectory of a 14th century monastery. This austere and historic setting is an appropriate rehearsal space for the renowned avant-garde company, which immerses itself in performance with an almost religious dedication.

This attitude is epitomised in the company's second production, the much acclaimed Chronicles - A Lamentation (Kroniki - Obyczaj Lamentacyjny), which is in Australia as part of the both the Sydney and Perth festivals this summer.

Chronicles is a movement-based theatre piece centred on the ancient Sumerian epic poem Gilgamesh, one of the earliest recorded legends. It also draws on polyphonic song from traditional rural Greek and Macedonian death rites - as well as lamentations in English, Polish, Hebrew, Aramaic and Farsi - accompanied by an Indian harmonium in a setting inspired by a Confucian temple in Taiwan.

The resulting 50-minute piece by seven performers is an intense and dynamic experience, simultaneously deeply primitive and utterly contemporary, which has won a swag of international awards.

Speaking by telephone from Poland, Grzegorz Bral says that the 5000-year-old story of Gilgamesh, which has been pieced together by archeologists from fragments of ancient clay tablets, is "half-broken" and he was curious to build a performance around such a text.

He was also captivated by translator Robert Stiller's poetic Polish version of the legend, particularly when Gilgamesh weeps over the death of his friend, Enkidu. "He calls on all nature to weep with him, and that was written in such a powerful way that I decided to build the performance just around this weeping scene," says Bral. "So it's a journey through different ways of weeping, crying. The cry which starts when you are born, the cries after your death, and cries accompanying your life in the meantime. It is not the story of Gilgamesh, it is the story of his tears."

Chronicles, while definitely an emotional experience, is not necessarily a mournful one. The sounds, which draw on some of the oldest musical traditions in Europe, touch a primal chord, although the polyphonic celebration of mourning is an unusual experience in Anglo culture, where lamenting, especially loudly and publicly, is frowned on.

It's not so different in Poland, says Bral, where he fears crying is becoming increasingly marginalised. "Like most places, we have two cultures. We have the village culture and the city culture. In the city you are more and more isolated from your real feelings while the village culture is still very much cultivating keening and lamenting. In Poland, people naturally cry, and I'm afraid if people cry less and less they will harden more and more. If we don't cry we become more aggressive to each other.

Chronicles is the result of more than two years' research and 18 months of physical rehearsals by the seven members of the ensemble. Bral says he was inspired to make a life in the theatre by seeing a performance by Polish experimental legend Jerzy Grotowski when he was 16. A few years later he joined another pioneering ensemble, Gardzienice Theatre.

"We were exploring something called new theatre territories. Theatre in the towns was not so interesting for us, bourgeois theatre, so we were exploring roots theatre, which basically was to do with the whole company travelling to different villages, different minorities and simply trying to learn their customs, rituals, songs, dances and on that basis trying to build a theatre performance.

"We held the view that what was happening in those cultures was more real than theatre based on pretending or giving a performance," he says.

Unlike other arts during the communist era in Poland, theatre was not heavily censored. "Our work was based in the village, so not many people had access to it, and it gave us an enormous sense of freedom," Bral says. "It wasn't tiring, it was a pleasure, we were free, we could do what we wanted."

Bral left Gardzienice, then ran acting workshops until he and fellow actor Anna Zubrzycki formed Song of the Goat in 1997.

During research in Greece, Bral was taught by women who were professional lamenters and he became fascinated by the psychological and physical aspects of their singing.

"They had something which interested me as a director and also as the tools for an actor. They possessed a kind of quality, a physiology of the voice, that they could use in such a way that if they wanted to cry, they would, but the listener had to cry as well. It was so touching and powerful that you had to follow, crying, and that was the purpose of the singing. All these techniques, these methods, were to encourage you to contact yourself very strongly with your heart.

"And for me that's the purpose of the theatre, that theatre should contact the spectator with their heart, with their feelings, the real feelings."

Bral says he does not sit down and write a play or a performance, rather it evolves from rigorous workshopping and a great deal of patience. "The process is based on training, lots of improvisation. Before you start somehow you have to establish two things. How the performance sounds and how the performance moves. Once we find the grounds, that gives us a base - it's a long process. Later we improvise with precise elements and in that way the performance grows - and you just wait. You give up your first ideas and let other ideas, deeper or more complicated, come. I'm not easily satisfied with what actors or I produce."

Having been in mourning, theatrically speaking, for some years now, would Bral ever consider doing something lighter?

"I'd love to do a comedy," he laughs. "I'm serious. But I don't think I have the skills. Somewhere inside me I'm a deeply tragic person. Maybe I'm just Polish, but I'll always choose the story about martyrs." 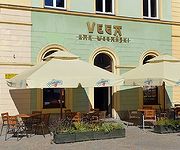