Despite being viewed as the most liberal and tolerant of the Baltic capitals, Tallinn - like Riga and Vilnius - still has a long way to go toward catching up with neighboring Scandinavian countries and Western Europe when it comes to the atmosphere surrounding homosexuality.

While homophobia is not as entrenched in the media in Estonia as it is in...oh, say uber-Catholic Lithuania and Poland...it is still very much entrenched in the public psyche. As with most Estonian problems, communism can be conveniently blamed for this one as well. After all, homosexuality apparently didn't exist under Stalin; in fact, recently publicised Soviet secret police files have shown that no one in the entire USSR had sex at all from 1946 to 1956 (just kidding). Many elderly Estonians still carry this communist-era intolerance with them, viewing homosexuality as a disease. Homosexuality was not legalised in Estonia until 1992. 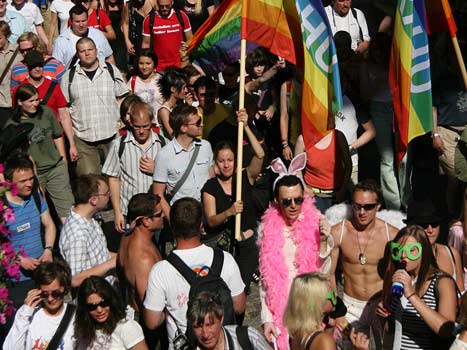 Since joining the EU, the bad track record of the Baltic countries with regard to sexual freedom has been exposed, thanks largely to incidents in Latvia which have gained international criticism. Riga's 2005 Pride Parade was attacked by feces-slinging hooligans, and 2006's event was cancelled outright. Vilnius failed this year (2007) in their first feeble attempt to hold a pride march after opposition from the government and the Church. Tallinn, meanwhile, has fared better by being the first Baltic country to have such an event in 2004. However, violence marred 2006's Tallinn Pride march when 15 people were injured by stick- and stone-wielding skinheads.

Nonetheless, big-picture advocates would point out that major strides have been made and things are moving forward. Several gay activist groups have been formed in Tallinn since 1990, and there is even a Gay and Lesbian Information Office on Tartu mnt in the Old Town. Since 1998, Tallinn has had a large and popular gay club, and today gay-oriented Kapp is one of the hottest clubs in town for people of all persuasions.

Tallinn Pride coordinator Lisette Kampus believes that Baltic people are generally very tolerant of sexual minorities: "It's not fair to say they aren't gay-friendly, they are. The objectors are a small minority who is really radically against gay issues, and they have a very loud voice. What differs us from Western Europe is that, there, society has made it clear that those types of attitudes are not okay. In the Baltics, nobody is reacting against these negative opinions."

Baltic Pride 2011 tooked place on 6th-11th of June in Tallinn. It is the 5th Pride to held in Estonia. In 2004-2007 Pride weeks with Pride marches took place every year. Those Prides brought about necessary discussions and guaranteed more visibility for LGBT people in Estonia. Yet, this year they did it a little bit differently.

Estonia is well known for being a singing nation. Following this tradition, a free open air concert toked place on the 11th of June 2011. It is an opportunity for everyone, regardless of their identities, to come together and show their solidarity toward LGBT people and support a caring and tolerant society.

Though gay tourists coming to Tallinn may feel a marked difference in Estonia in terms of the country's openness toward gays, travellers generally have little to fear in terms of gay-bashing. Nonetheless, discretion is a good defense and one still employed by most of Tallinn's gay-oriented nightclubs, the number of which continues to grow, and there is no doubt that Tallinn outshines both Riga and Vilnius (perhaps both combined) when it comes to gay nightlife.

Gay or Gay-Friendly Clubs in Tallinn:

Other Gay-Oriented Services and Websites:

Sauna Club 69 - Popular sauna and pool facility for men only

Pink Baltics - The first gay travel company in the Baltics (in English)
www.pinkbaltics.com

If you know of any related resources that should not be missing from this list, please let us know. Also, we encourage you to leave your comments about gay Tallinn below; we encourage different viewpoints and want to hear your thoughts about the gay cause in Estonia and Tallinn (though abusive or hateful comments will not be tolerated). Thanks!

I live in Tallinn, now in my 70s and have been a submissive gay most of my life, I would still like the fun of it, if I could find a freindly guy to help me out. I have joined gay personals, but it all appears, it's all for the young, the feelings don't change with age, so if there are guys out there interested in making me happy, I would love to hear from you, of course to make life easier if you also live in Tallinn! Thanks for reading!

Hi Robert, hope you managed to find someone to make life easier for you. I am also in my 70's and planning to visit Tallinn on 28 June 2021 for 14 days. I live in London. Maybe we could meet and go have a coffee and a chat. I'm not really looking for any intimacy, just a friend to enjoy a coffee with. Regards John Stokes

Hi John, Really nice to hear from you, and yes I would be happy to meet with you while you are here! You didn't mention whether you were gay or bi, but if you prefer not to be intimate, that's fine, if you do that would be fine also! A meeting point would be, Freedom Square, but we can sort that out later, we also have this coronavirus still hanging about making life difficult!

Hi Robert, thanks for your reply. I am 100% gay and happy to be so. The corona virus is indeed a nightmare. I was meant to be in Thailand and Laos right now. I usually spend December till March there every year. I only work from April till end of November each year as a tour guide in London. It would be wonderful to meet you. I will stay in an apartment in Kalamaja during my stay in Estonia.

Hi Robert, hope you doing good. I also just arrived from France to Tallinn I'm 27 and also looking to make friends. Would love to meet up with you have some time.

Hi Jerome, good to hear from you and thank you for your response, are you gay or bi, top or bottom?

I been in Tallinn last weekend, I wanted to have a fun, but unfortunately there are no gay club’s in Tallinn, I saw the envyme company on the Google. I decided to write and find out if they would recommend some kind of club, and as it turned out they have a service of providing dancers to a strip club, I have not seen this yet, a car came for me and I arrived at the club, the manager met me, and we went through a separate entrance by the parking lot, there was a separate room there were two dancers, cool guys, they danced a striptease very cool, good music, we drink and had fun, you could order a private dance, massage and a sauna. I was just delighted with the fact that there is a real strip club with boys in Estonia, which is really very cool. I saw this only in the Czech Republic and here, of course, it is 100% better. I absolutely love it! Company: Instagram: Tallinn_striptease Facebook: Envy Me Tallinn

Thanks for the information! I had a pleasant time in Tallinn, but did not go to a gay club. The atmosphere was friendly.

The only one gay sauna in Tallinn is Club 69 - on Sakala 22a. you can find on Facebook like Club 69 Tallinn or web Club69.ee

Hello! for us the only club to visit in tallinn is club 69 and Xbaar, very friendly and a lot of fun. only sad that x bar is open only until 4 or something like this, and 69 till 8 in the morning, like i understand.

Me and my friend were this summer in Estonia, went to Tallinn and Tartu, in Tartu no gay life at all, but in Tallinn we visited 2 places, X-Baar, and Club 69, they are just 200m from each other, we went on weekend, so both places were full, X-bar is dancing, club 69 is bar with sauna and dark rooms, so we were cruising :D

We need more tolerance in the world.

DO nOT GO TO G PUNKT, THEY DISCRIMINATE WHO SHOULD GO IN. THAT'S NOT ACCEPTABLE!

SHALOM from Tel Aviv :) I'm coming for a quick visit to Tallinn and I found your site very usefull! can't wait!

Amazing two days in Tallinn! Found a bar round the corner from my hostel and noticed it had a sauna. So being curious I went to the bar and asked if there were any gay bars. The bar girl suggested X-Baar just up the road. Went there during the day and it wasnt busy but had a nice chat to the bar man who suggested other gay bars - The Kopp and Ring Club. Went to The Kopp but it wasnt busy but looked very stylish and nice. Couldnt find the Ring Club - it must be hidden away somewhere! There was also another gay bar over the road from X-Baar that you had to press a buzzer to enter but it was only open at weekends. I can't remember the name unfortunately. So that night I went to X-Baar and it was amazing. Bar staff was friendly and the men drinking in there were very chatty and interested to know about England. Overall, brilliant time in Tallinn. X-Baar is a definite place to go!!!

Hello from Canada :) We will be travelling to Estonia and region in 2012, and I found your site very informative for planning. Thanks. Rob

They guy above is wrong, Taipei has a very hot gay scene and Taiwan, though influenced by Confucionism values, has a very liberal attitude among the Asian countries aside Japan, Thailand and the Philippines. I have visited Tallinn and found that you may have more fun and relax in Taipei than in this beautiful city. Check the Taipei Gay Parade and you will realize w' I am talking about.

I am a Taiwanese and I think your page is really cool. Taiwan is a place not friendly for gay people and I would really like to visit Estonia.