Gay rights in Riga have a long way to go before the country catches up with its Western European counterparts, so don't pack your bags expecting anything as raucous as the gay scene in Barcelona or Berlin. Though Riga itself is not as deeply Catholic as Vilnius, another Baltic city, it is nevertheless a relatively conservative place politically, and public officials (and of course church officials) have been known to openly speak out against homosexuality and homosexual organizations.

Riga tried to organize its first pride event in 2005, but government and church leaders and even several important public figures denounced the event and homosexuality in general, and the parade went off with more protesters than participants, with eggs, tomatoes, and even faeces being thrown and reports of violence being common. In 2006, the parade was unlawfully banned by the government under the pretext that it would threaten the peace of the country. Even after the ban, a conference was organized by the gay rights group Mozaika instead, but the participants were again faced with protesters throwing faeces and holy water at the participants. Perhaps the greatest sign of change is the fact that this year's Riga Pride Parade was the first one to go off successfully - if you count success as the lack of violence and throwing of faeces. Today, the gay rights groups are better organized and have the support of European officials and participants, and the potential for change and understanding is higher than ever. 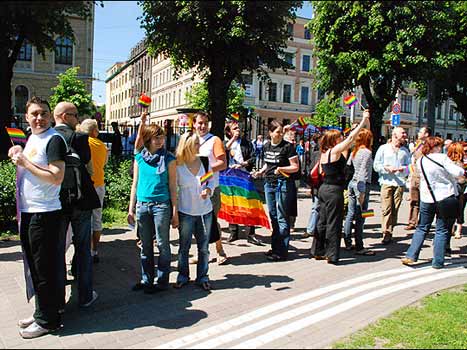 Above: The 2007 Riga Pride parade, the first successful gay pride march in Riga

Purvs:
Matisa 60/62
Purvs, "The Swamp", is a gay-friendly club popular with straight clients as well.

Centrum Gay Hotel:
A. Kalnina iela 4
+371 28861634
Centrum is the only gay hotel in Riga, and is conveniently located next to XXL club and Riga's only gay sauna. The hotel is friendly and discreet with luxurious rooms and includes all the amenities of a high class hotel.

Varaviksne:
A. Kalnina iela 4
Varaviksne is the first gay sauna in Latvia. It's open daily from 3 pm until 2 am weekdays, and until 7 am Fridays and Saturdays. The sauna has its own bar, and features steam and dry saunas, a jacuzzi, cruising area, cabins and video rooms, and showers. Entrance is 7 Ls for under 25, 10 for over, and the entrance fee includes a towel, and even condom and lubricant.

Mozaika, the main GLBT alliance of Latvia, and organizer of the "March for Equality": mozaika.lv
Latvian Gay Portal: gay.lv
Pink Baltics, the first gay travel company for the Baltics: pinkbaltics.com
ILGA Europe, the European Region of the International Lesbian and Gay Association: ilga-europe.org

If you know of other particularly gay-friendly places in Riga, please let us know; and feel free to post your comments about gay Riga on this page below. We encourage different viewpoints and want to hear your thoughts about the gay cause in Riga and Latvia (though we won't tolerate abusive or hateful comments). For more information about pro-gay organisations and events in Latvia, visit mozaika.lv. We've included a few Lativa-specific GLBT websites above, though a few are only in Latvian. We hope they'll be a helpful resource; if you know of any other helpful websites, let us know as well!

Coming to Riga, from America, on August 5th for three days, and again on the 13th for one night. I am 51 and would like to meet someone to hang out and see the town.

XXL Club, Purvs and sauna Varaviksne are all closed. At the moment there are only 2 gay club in Riga: the newest one is TOP Club, that oficially calls themselfes Gay Club (fb.com/TopClubRiga), and Golden - as gay friendly club

Hi Im from Mexico Would like to meet any locals to go out for a coffee or a beer Im 59 yrs old on the medical field, contact me citoglez@hotmail.com

the xxl terrible and not safe place. If u want to be agressed and descriminated by local criminal russians u are welcome to XXL. When i was last time the local criminal guys entered each dark room and laughed at gay guys. The security didnt react, so avoid visiting this depressive place

i am coming to riga in feb, stay there for two years, i am 23 looking for a good gay friend, i am stright, any one for good friend ship contact me ravis225ss@gmail.com

I'm thinking about coming to Riga with my gay son for a few days next year. I hope he will feel safe there and enjoy Golden. He'd like to make some English-speaking friends. Where could he meet them?

I'm a regular visitor to Riga and had a great holiday in Latvia just recently with friends. Visited XXL on Friday night, 5 euros to get in, hardly anyone in, maybe 20 people tops, old fashioned place, hasn't changed since I first went 13 years ago, drinks expensive, vodka and coke 10 euros! Not at all friendly. Went to Golden bar on Thursday night, free to get in, very friendly and not expensive but only five or six people in, then went again on Saturday night and they charged 10 euros just to get in! We decided to go elsewhere for drinks and went into the old town in the bars around the cathedral, had a great time, great music, very chilled and cheap. The gay scene really needs to sort itself out, its such a rip off, not good music and very old fashioned and I'm by no means young. If I thought it was expensive then how do young Latvians afford to go? Latvia and Riga great for a holiday but I wont be going on the gay scene again, its a complete let down!

I live in UK and I'm coming fi Riga, my Latvian friends are helping me to learn to ski in the mountains. I'm hoping I might find a gay ski instructor and maybe make friends while I'm there... If you can help or give any advance I like to hear from you.. Thanks Richard you can email me richardluxmoore@gmail.com

hy all, who will wisit Latvia in december? you can write me on email arny89@inbox.lv im guy 22y... lets do somthing fun ;)

33 years old Turkish top guy visiting Riga in the week time from 12 to 15 th of August, anyone who wants to hang around?

will be in the same period in Riga.. also looking for hot fun... etc.. profile on planetromeo.com/cees2meet

I am also in Riga for one night only!!! I will be on Grindr or Scruff TONIGHT!

Anyone else visiting Riga this weekend (27-29 july)?

went to the sauna today, it's durty expenseve (12ls and in internet was suppose to be 7 untill 20h....) steamroom didn't work, waste of time and money

I'm going to Latvia (Letonia in Spanish) next week. You said Golden is the most interesting place, would yo give the address please? Gracias

I need an invitation code for conect in the Gay.lv, but i haven't mobile from Latvia. How can i get this code? Thanks!

Went to Golden on my first night and it was amazing! Friendly staff and even more friendly men! Drinks prices are very reasonable and music is brilliant. Went to XXL the second night. It was OK. Drink prices were more expensive than Golden and the men there seemed on the hunt for a 'man for the night' constantly. Overall, brilliant!!!

Sorry guys, if you think Riga is a catholic city, we can't believe anything you tell us. One can only assume you have never been there.

I'm 25 years old and was thinking about going to the sauna Varaviksne and club XXL on april 7th in the evening. Is there anything going on?

I was thinking about going to the sauna Varaviksne on June 7th in the evening. Am I going to have fun?

I'll be in Riga in June 6th and 7th. Any suggestions as I'll be in town on a Monday and Tuesday night? I'm a young and nice Canadian.

Purvs doesnt exist anymore (thanks god for that)and Golden is litle more popular than XXL at the moment. But XXL is bigger and they have lowered the price on drinks now, so for guys XXL is better than Golden. When I visit Riga I start at Golden and somewhere between 1 and 2 0`clock I go to XXL.

I m living in Riga! Best here is Golden bar (It is like club) ;)Not xxl!

me and my group were in riga just a week ago (15-19 july) and we were looking for gay venues and found none. though Latvian boys are hot specially the ones driving this tricycle tourist vehicle all around the old town for tourist joyride. I've talked with some one named chris or is it kriss? is that you? if you are, then I love to meet you again next time I come there.

This is a nice website perhaps you could remove the first comment on here as it is very unfriendly?

hi i m going to riga with my best latvian friend and i m lil bit scared about the population s reaction first for being openly gay and also having a mixed race color(black-arabian) so i m sorry for being straight forward to my point but i seriously need some advice on my problem,thx in advance

I am not from Riga, but I know there is a place called Golden bar. It is a mixed place, but mostly gay. Never been ther, though.

hey its a great page but i was sure there is more places to go too.....is it only xxl and purvs????as im bringin 12 english friends with me in the middle of august gotta show them the gay scene in capital please some1 get back to me:)cheers alex

You should correct your comment about Riga not being as Catholic as Vilnius. 80% of Latvians are Lutherans and 20% are Catholic from the southeast of the country where they are known as Latigals. The Slavic population is Orthodox. This says nothing about acutal church attendance which is quite low.

am going to visit latvia. any idea of good gay places to visit?

Hi thanks so much for this page its very helpful! Please add more clubs if there are any!