The Land That Sings

Non-Latvians may find it hard to comprehend the importance of the Latvian Song and Dance Festival which takes place in Riga once every five years, and takes over the hearts and minds of the entire nation. The simple fact is that the festival is inextricably bound with Latvia's very identity.

After centuries of foreign rule, social and political changes in the 19th century led to the rise of a National Awakening in the minds of the Latvian people. They strove to rediscover their Latvian identity, despite the oppressive influence of so many foreign powers. The way they did this was through song. 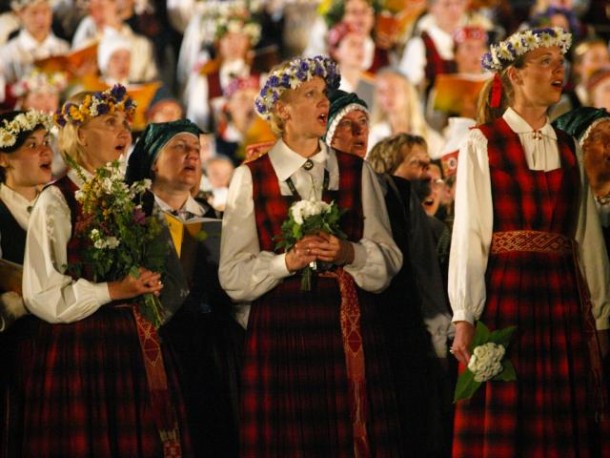 Latvian folksongs, or 'Dainas', have a centuries old history and is estimated that over 1.2 million exist - making Latvian oral tradition one of the richest in the world. Dainas are characteristically made up of quatrains, or four-lined stanzas, and their topic usually include philosophies on life, love and the world order and the important rites of passage surrounding birth, marriage and death.

Taking the idea from the recent German practice of organising huge choir concerts, the Latvians organised their first Song Festival in Riga in 1873 in which 45 choirs and 1019 participants took part. Much of the aim of the festival was to help foster in Latvians a sense of national identity - and this certainly worked, as in 1918, during the aftermath of the First World War and the Russian Revolution, Latvia declared itself an independent state.

Unfortunately for the Latvians, Soviet Russia was to reclaim the state as its own following WWII. However, even the Soviets, who had criminalised the ownership of a Latvian national flag, dared not deny the people their beloved Song Festivals. And so the Song Festival continued to exist, albeit with an unhealthy amount of panegyric in praise of Lenin. Despite the heavy russification of the festival it was understood between Latvians, at first tacitly and later in the 1980s more openly, that the event stood for Latvian national identity. From 1987 to 1991 in fact singing protests became Latvia's most powerful weapon against the Soviet regime, as it did in Lithuania and Estonia, in what is now termed the Singing Revolution.

But enough about history, what does this Latvian Song and Dance Festival (the dance element was added in 1948) actually consist of? Well basically some of the largest choirs in the world getting kitted out in national dress and singing their hearts out! At the last Song and Dance Festival in 2003 over 30,000 participants, 300 different choirs, more than 500 dance groups, plus 57 brass bands, three symphonic orchestras and one chamber orchestra all took part during a crazy eleven days in June and July. On top of that a large number of art exhibitions, parades and also some contemporary rock and pop concerts took place.

The Latvian Song Festival, along with its sisters festivals in the Baltics, are truly unique awe-inspiring events - after all what other events can boast 20,000 people in national dress all singing in pride of their country at the same time! Perhaps that's why they were recently bestowed the title of "Masterpieces of the Oral and Intangible Heritage of Humanity", by UNESCO.

The next festival is due to take place from the 5th through the 12th of July 2008, in Mezaparks and Skonto Stadium in Riga. Attendees are bound to be blown away by The Land That Sings.

More information will soon be available on the festival's official site.

I am very impressed by the high level of choral singing in your country. It is a pity that your festival is already in june. Most countries in Western Europe don't have holidays so early in the season.

Es milu Latvia! My wife is Latvian, we went back last year, and are excited about coming for the festival next year. Anyone who is considering a trip to Europe need to see the real culture and beautiful people of Latvia! BTW, the food and beer is much better in Latvia than in Western Europe!

Well written and does a great job of explaining the history of Latvia.

I THINK THIS IS AWESOME I WANT TO GO TO LATVIA NOW ;)

I have friends who live here. It was awesome!!

This was really good, however what about the festivals in America?

I really want to go and visit this, sound like a lot of fun. :D P.S. posting this from my High School~

hiya all can anyone plz tell me of any classic latvian love songs,my mum was born in riga and moved to england during the war ,my mum really misses her hometown ,and i would love to find her some of the latvian classics for her to listen to.many thanks all:)

i never heard it before..

it is a perfect organization.thanks nataly

Hi, we are not the organizers of the Latvian Song and Dance Festival, this is merely an informative page about the festival in Riga. To contact the organizers, please find their information on the official website: http://www.dziesmusvetki2008.lv/

Am I too early to be booking for the festival in 2008 as unable to get through into the official site?

Greetings, We are not the official organizers of this festival, we merely provide information on this event in Riga. To enquire about entering the festival please visit the festival's official page: http://www.dziesmusvetki2008.lv/ Thanks, The Riga Life Team