The Page of Hrabal

Along with Milan Kundera, Bohumil Hrabal is one of the most important Czech writers of the 20th century, and even more central to Prague than Kundera. Kundera even said of Hrabal: "Bohumil Hrabal embodies as no other the fascinating Prague. He couples people's humor to baroque imagination." Hrabal finished Law at Prague's Charles University, and lived in the city from the late 1940s until his death in 1997. Though not as internationally known as Kundera, Hrabal had more admirers than adversaries in the Czech Republic than the former, probably because he didn't leave his homeland and language behind for France. However, Hrabal does have his admirers abroad, even inspiring the novel The Book of Hrabal by Hungarian writer Peter Esterhazy. 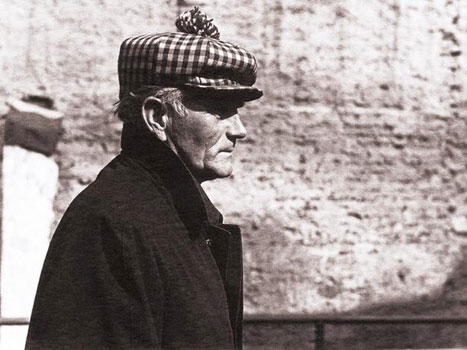 Hrabal was born in Brno in 1914, but his home became Prague after he finished university there. In 1965 Hrabal published his best known novel, Closely Watched Trains, which was made into a film by Czech director Jiri Menzel. Hrabal's style was distinctive, often utilizing run-on sentences (the whole novel Dancing Lessons for the Advanced in Age is written in one long sentence) and the schizophrenic struggle between individual moral conscience and the demands of society. The classic Shakespearean clown character is ever-present, seemingly a fool but often pulling bits of profound insight out of the air.

Many of Hrabal's works were translated and published in English, including his last, Total Fears: Letters to Dubenka, published posthumously. When in Prague, the best place by far to find English translations of Hrabal and other Czech writers is Anagram Bookstore, where they have a whole section of Czech literature. Hrabal's death is nothing if not ironic like his works: in 1997, he fell from his fifth story hospital window, supposedly feeding pigeons. Hrabal lived in a fifth story apartment, however, and in several of his works a character has ended his life by suicide from the fifth story. Coincidence? Perhaps, but the truth shall never be known.

I read "Too Loud A Solitude" after returning from Prague to the US. A joy was it. Hrabal reflects on the beauty and tragedy of things past, but never once is he a sentimentalist. I'm onto "I Served the King of England."

I love "Too Loud a Solitude" soooooooo much. I've read it more than 10 times! Peace be upon hrabal.

Hrabal is perhaps the most delightful writer of the 20th century [Wodehouse excepted!]. Thank you for giving him his due on this site.

Henrik, Thank you for noticing our typo, it has been corrected. We hope this site has been useful for you. - The Prague Life Team

Please spell Hrabal correctly on your website. "Hrabal's death is nothing if not ironic like his works: in 1997, he fell from his fifth story hospital window, supposedly feeding pigeons. Hrabel lived in a fifth story apartment, however, and in several of his works a character has ended his life by suicide from the fifth story."