High Life in the Lion City of Old

The visit of Emperor Franz Joseph I to Lemberg (Lviv) in 1880 was an event that had to be orchestrated down to the very last detail. For weeks beforehand, officials worked overtime to ensure that everything ran like clockwork. Ladies fretted over their wardrobes, and gentlemen made sure that their moustaches were looking especially magnificent. The Governor of Galicia, the Polish Count Potocki, had the honour of hosting a banquet for the Emperor. All seemed to be going fine, but at the last minute, someone threw a spanner in the works.

Curiously enough, the cause of the commotion was not a chef who had accidentally sat on a souffle, nor a naked anarchist who had broken into the Count's palace. No, it was the Count's own wife, Maria Potocka. A proud lady - not atypical of the local nobility - she had announced that she would not stand up in the Emperor's presence. For her, the matter was quite straightforward. The Austrians may well have returned the reins of power in Galicia to the Poles, but this could not redeem the outrage of the initial occupation a century earlier. Fearful of a flagrant breach of court etiquette, the guests prayed that the Countess would see sense when the Emperor entered the room. But when the doors opened, she remained rooted to her chair. 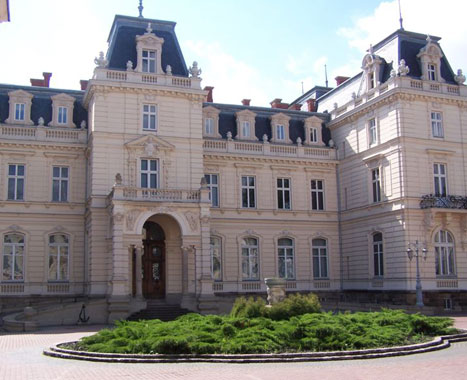 Above: The palace of the Potocki Family, one of the most powerful clans in pre-war Lwow

Thankfully for Governor Potocki, the above episode came to nothing. The Emperor had become an increasingly conciliatory figure in his middle-age, and he feigned not to notice the Countess's insult. Still, the anecdote hints at the complex allegiances in this once cosmopolitan city, with its Armenians, Austrians, Jews, Poles and Ukrainians.

For several centuries, high society in the city revolved around the Polish nobility. When Winter began to rear its head, the palaces of Lviv would rouse from their slumbers in anticipation of the coming season. For noblemen, there was little sense in staying in the countryside with the land packed with snow. Not much could be done with the soil, and besides, there was entertainment to be had in the city.

Some of the grandest names in Central Europe had palaces in Lviv (Lwow to the Poles) - Potockis, Zamoyskis, Sapiehas and Lubomirskis. Poland's most dashing monarch, Jan Sobieski (r.1676 -1696), was himself a native of this neck of the woods, and his family once owned a palace right on the square (today it houses an enchanting museum).

Balls were held in the palaces of the aristocracy, especially during the carnival season, a time that saw something of a non-stop medley of parties (given that February and March can be devastatingly depressing in this part of Europe, this served as an entertaining antidote to the weather).

During the late 19th century two much feted additions to Lvovian high life appeared, the Noblemens' Casino (Kasyno Schlacheckie) and the Opera. The former was in effect a gentleman's club, where cards played a prominent part, no doubt shredding the nerves of wives and mother-in-laws. Meanwhile, the Opera House, which commanded a showstopping position on the expansive Waly Hetmanskie Avenue (today's Svobody Prospect) became one of the finest in Europe, and a real feather in the city's cap.

After the First World War and the subsequent struggles for Polish and Ukrainian independence, Lemberg became Lwow again as a city in Poland. The pattern of social life continued in much the same way. Academicka Street (today's aleja Schevchenko) was the city's chicest promenade in those days, with its elegant boutiques, cafes and patisseries, not forgetting the Hotel George at its northern end. But things came to an abrupt halt in September 1939.

Dear Nick. Good article. I am part of a film crew who will be filming in Lviv next week 18 - 22 October. I am looking for someone with knowledge of Polish nobility and wondered if you could contact me about this. Thank you.

Hi Bev, I'm the current Editor of Local Life and, funnily enough, based in Krakow, Poland. Nick doesn't write for us any more but I'll see if I can get in contact with him for you. If not, then I will put you in touch with someone else who's versed in the subject.

That would be amazing. Would you mind sending me a private email so we can talk further about this offline? Thanks Katherine.

Hi Katherine. Our film crew are heading to Lviv tomorrow and will be there filming on Thursday. We are still very keen to find someone who can talk to us about Polish Nobility. If you contact Nick or someone else who you think would be suitable, please let me know! Thanks Katherine. Bev.