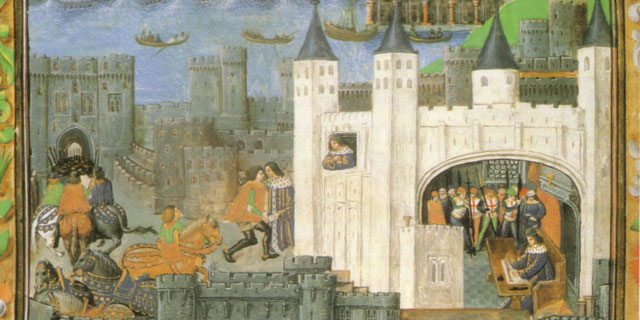 London’s roots stretch as far back as the Romans, who invaded Britain and defeated its Celtic inhabitants founding a major settlement along the Thames in 43 AD. It was during this time that London first acquired its original name of, and began its steady growth from the areas around today’s London Bridge.

The legendary invasion of Roman Londinium by Iceni tribe leader Queen Boudica came soon after in 60 AD. While Londinium was razed to the ground, the Romans eventually prevailed and began to rebuild the town as the commercial capital of Roman Britannia. As their empire dwindled, Romans abandoned the city in 410 AD.

In the meantime, the Saxon trade settlement of Lundenwic arose slightly west of the original Londinium. From the 8th to the 11th century, London suffered a great number of attacks, and was at one point ruled by Danish Vikings. Eventually, Edward the Confessor retook the English throne and began building what is now Westminster Abbey. The division of royal government in Westminster and commercial London in the area of the City remains even today.

Following the death of Edward the Confessor, England was unified as a nation state when the Duke of Normandy invaded England and took the throne in 1066. William The Conqueror guaranteed the City of London its independence and began construction of the White Tower, the central building of the today’s Tower of London.

Trade in London boomed but unsanitary, cramped living conditions contributed to the spread of the Black Death, which devastated London in the 14th century killing at least half of the city’s population, and returning several times until the 17th century.

After the rise and fall of Richard III in the 15th century, London was turned over to the Tudor dynasty whose most famous member, Henry VIII, oversaw some of biggest changes to the city. New palaces were built at Whitehall and St.James, and the king moved into (and subsequently expanded) Hampton Court.

After the first of his six wives, Catherine of Aragon, failed to produce a male heir, Henry VIII broke off from the Catholic Church sparking the English Reformation. The land and assets of monasteries across the city was seized, and over (turbulent) time, London eventually transformed into a largely Protestant city.

Another significant figure in London’s history was, of course, Elizabeth I, who reigned from 1558 to 1603.  During this time, England thrived in world trade, the population grew to a quarter of a million, and the Royal Exchange was founded. The English Renaissance also saw the talents of artists such as Shakespeare and Christopher Marlowe come to the fore. A reconstruction of the original Globe, where Shakespeare premiered much of his work, remains a popular attraction in London.

Elizabeth’s predecessor James I nearly lost his life in 1605 when the members of the Gunpowder Plot, led by Guy Fawkes, nearly succeeded in blowing up the Houses of Parliament. This story is remembered until today as part of annual Guy Fawkes Day (aka Bonfire Night) on 5 November with bonfires and fireworks.

Soon after, Charles I’s clashes with the parliament led to the Civil War, which in turn led to his beheading for treason in Whitehall in 1649. Oliver Cromwell ruled an English republic for 11 years.

The Restoration of the monarchy wasn’t far behind, and Charles II was asked to return to London in 1660 – unfortunately for already deceased Oliver Cromwell, his body was exhumed, hung, drawn, and quartered.

London suffered two immensely tragic events in the 17th century, starting with the greatest outbreak of bubonic plague the city has ever seen – the Great Plague of 1665. Poor sanitation, overcrowding, and a hot summer contributed to the severity of this outbreak, which took the lives of some 100 000 Londoners. Just one year later, the Great Fire of 1666 saw the destruction of 80 per cent of the city leaving behind next to nothing of medieval London.

With almost a blank slate to work upon, architects such as the great Chrisotpher Wren built a new London, including Wren’s masterpiece St. Paul’s Cathedral.

By 1714, the Stuart line had ended and succession rules pointed towards the Duke of Hanover (who incidentally did not speak a word of English), who was crowned England’s king, George I. Georgian London was a booming place, as the population rose to nearly one million. While the rich settled in west and north London, the poor slums of east and south London were rife with crime, and the love of cheap gin was certainly not helping.

Victorian London marked yet another golden age for the city, as London became the biggest, busiest, and richest metropolis in the world. The Industrial Revolution was the backdrop for the classic works of Charles Dickens, as factories, railways (including the beginning of London’s Tube), and newly modernized sanitation systems transformed this city.

The 20th century didn’t kick off very well for London, as England was involved in World War I and the Germans bombed the city killing some 650 Londoners. Not only did the entire country suffer the ramifications of the war, but the following years were not much better. Recession hit in the 20s, a decade which also saw the establishment of the BBC and the Suffragette-led rise of women’s rights. When Edward VIII abdicated the throne in 1936, George VI (father of the current Queen Elizabeth II) took over.

World War II did not affect London directly until 1940 when the Luftwaffe began its intense bombing of the city, now known as the Blitz. East London and the City were particularly badly hit during the German bombings, though St. Paul’s and the Tower of London miraculously survived. Children were evacuated from the city, and many of who remained used the Tube as bomb shelters. Throughout the Blitz, some 40 000 Londoners died.

The years following the Second World War saw the coronation of today’s monarch – Elizabeth II in 1953.

This era also saw a great influx of immigrants, particularly from former British colonies. Unfortunately this time also experienced serious racial tensions, such as during the Notting Hill race riots. The swinging sixties showed London off as an international hub of music and fashion, and Carnaby Street in Soho was the coolest place of them all.

The bleak economic climate of the 1970s, an era which of course, produced the famous punk movement, took a turn with the election of Britain’s first female prime minister – Margaret Thatcher. Her tough economic policies allowed England time for financial recovery in the 80s, however her social agenda was wildly unpopular with the working class. Eventually the left-leaning Labour Party returned to power in Britain in the 1990s,

In 2005, London learned that it would host the Olympics for the third time in 2012. Sadly, the celebrations were short lived – the day after, terrorists exploded bombs across the public transportation network killing 52 people.

London today, as led by its Mayor Boris Johnson, continues to be a vibrant hub and international icon of fashion, art, finance, architecture – and pretty much anything else you can think of!