Some of London’s most significant landmarks are located within this relatively tiny area, so it’s an easy afternoon stroll to see many of the city’s top tourist attractions.

Ever since the reign of King Edward the Confessor in the 11th century, Westminster has been the political and royal heart of London. Westminster Palace, now home to the UK’s parliament, along with Whitehall Palace, was once an official royal residence. Today, nearly all government business takes place in this tiny area, and Downing Street itself is just off Whitehall.

For visitors, there are three main focus points in the area – Trafalgar Square, Whitehall, and Parliament Square. 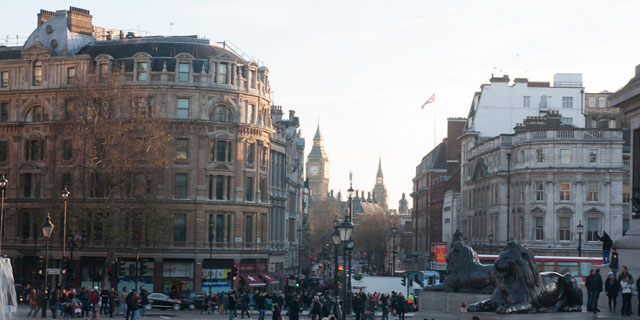 Trafalgar Square was once a truly congested and noisy place, but after a serious clean up in recent years and a renewed focus on pedestrian traffic, the square is now a pleasant, almost serene London landmark. At the end of the day however, as many as six streets jut out of Trafalgar Square in a classically London-like tangle of roads, but the view from the square onto Whitehall and Big Ben has to be one of the most splendid in the city.

The square is a buzzing tourist attraction, and almost everyone likes to take a photo with the oversized bronze lions guarding Nelson’s Column. The column itself is an immense structure topped with the likeness of the great naval hero Admiral Horatio Nelson, who died in the Battle of Trafalgar in 1805.

Surrounding Nelson’s Column are four comparatively small columns, three of which hold statues of great military men, and the last of which is dedicated to the Fourth Plinth project. Contemporary artists are commissioned to create a temporary work of art that will remain atop the fourth plinth for 18 months each.

Along with two lit-up fountains, the other main features of Trafalgar Square are the impressive buildings that surround it, including St Martin-in-the-Fields church, the National Portrait Gallery, Canada House, as well as the great National Gallery.

There are many paths to choose from when leaving Trafalgar Square, one of which is the Queen’s main drag – The Mall. Entered via the grand Admiralty Arch, The Mall runs straight along St James’s Park to the front door of Buckingham Palace.

However, for our purposes we’ll focus on the square’s southern route – Whitehall. This wide avenue leads directly towards Parliament Square, passing by several significant landmarks on the way.

Starting with a statue of Charles I (who was publicly executed on Whitehall), this street is home to several significant monuments including the Monument to the Women of World War II as well as The Cenotaph. The latter is Britain’s most important memorial dedicated to the victims of war, and the Queen lays a wreath here during Remembrance Sunday ceremonies every year.

Along Whitehall there are several points of interest worth checking out, starting with the headquarters of the Household Cavalry – Horse Guards. Behind the building is the Horse Guards Parade, where the changing of the guards takes place everyday at 11am, and at 10am on Sundays. During the Queen’s official birthday in June, the Trooping of the Colour takes place here as well.

Churchill’s famous War Rooms can also be found along Whitehall, and are a popular destination for history buffs. An underground complex of rooms, this fascinating piece of modern history feels like a movie set – except, of course, that everything here is real! Inside you’ll find several rooms which feel as if they have been untouched since the war, and include a map room, a transatlantic telephone, and even Churchill’s own bedroom and office.

Whitehall takes its name, of course, from the grand Palace of Whitehall which served as an official residence of English monarchs from Henry VIII until its was destroyed by fire in 1622. All that remains today is the Banqueting House, which gives an impressive taste of English renaissance architecture as designed by Inigo Jones. The impressive main hall is open for visitors, and is well worth seeing – particularly for the nine ceiling panels painted by Rubens in 1635.

While the country’s sovereign has since moved on, the UK’s government has taken up residence all along Whitehall, and this includes one of the world’s most famous addresses – Number 10 Downing Street. As the official residence and office of the Prime Minister since the 18th century it might not look like much, but behind the simple townhouse façade is a complex of some 100 rooms. Sadly it’s no longer possible to visit the address face-to-face, as massive iron gates have been installed due to terrorist threats – but a quick peek through from Whitehall is an easy endeavour.

Whitehall culminates at Parliament Square, with stunning gothic Westminster Abbey directly across. The abbey has seen the coronation of every English king and queen since the 11th century and is the resting place of many sovereigns and important historical figures from throughout the ages.

Finally, Westminster Palace, also known as the Houses of Parliament, with its dramatic spires and Big Ben clock tower, is simply a London icon. As was the fate nearly all of London’s medieval buildings, the original Palace, which dated back to the 11th century, was destroyed by fire. What remains is the majestic Westmisnter Hall, an enormous space with an incredible arched wooden roof (known as a hammer-beam roof). The hall hosted coronation banquets in the medieval ages and later acted as a courthouse. The remainder of Westminster Palace hosts the House of Lords and the House of Commons, where MPs discuss new legislation. The Houses of Parliament are open to the public and admission is free.

All finished with Westminster? St. James and Buckingham Palace are just a few steps away…