The Trumpeter of Krakow

Straining his eyes, the old watchman looked out onto the horizon for a trace of the signal fire. But somehow, he felt that as had happened before, his fellow guards had retired to the warmth of home or lost the battle against sleep (no doubt aided by the rather excellent vodka that had been on sale at the Rynek of late). The black mass was still there, and again that rippling effect that had sparked the first shock of adrenalin. Dawn was breaking now, and resolved that he would not leave anything to chance, he scuttled up to the peak of the tower and began the trumpet call.

As he did so the mass rippled again. But now it was moving forwards out of the mist. The warriors of Genghis Khan, having dined heartily off blood and sour milk, were now poised to attack. The mutterings of the one-eyed man had been true.

For the old watchman there were now no more doubts. And with the adrenalin firing through his veins he redoubled his efforts, punching out the notes in staccato bursts. A face appeared at the window of the carpenters tower. It was Stas, a goodly fellow, and quickly grasping the seriousness of the situation, he leapt down the steps to wake up the rest of the guard. Meanwhile, the old watchman played on, hammering out the notes for all his worth. More faces were appearing now. Shutters opened down Florianska street, and a gradual hubbub began to take hold. The old watchman blew on.

Away on the dewy meadows the Tartar warriors were mounting their horses and drawing their swords. But already the old watchman could see the Polish archers arriving: the King's own men. Now there was a chance!

The archers took up their positions along the battlements. Some stood tall over the precipice whilst others crouched against the loopholes, steadying their bows at the approaching chargers. The wild yellow men were galloping through the mist now, their long moustaches twirling in the wind as they cried out the attack. But by now the arrows were flying. They hissed through the air, raining down on the hapless warriors in great waves. The horsemen rode on, but down came a second wave, and then a third. Victory was nigh! Three more waves fell and the Tartars were forced into retreat. Krakow was saved!

Jubilation erupted amongst the men, and it was some time before the excitement died down. Yet the goodly carpenter Stas soon realized that something was amiss - his old friend the watchman was nowhere to be seen. So off he went in search of the trumpeter. However, when he reached the tower he found that disaster had struck - his dear friend had fallen. A single Tartar arrow had pierced the old watchman's neck and he had died in an instant. The trumpet was still clasped in his hands ready to blast out a final note.

The Cracovians would never forget the act of the humble old watchman. Thus from henceforth it was decreed that a bugle call should be played each day in memory of the hero. And so it was, for hundreds of years the 'hejnal' has rung out over Krakow's rooftops for the noble watchman who saved the city. 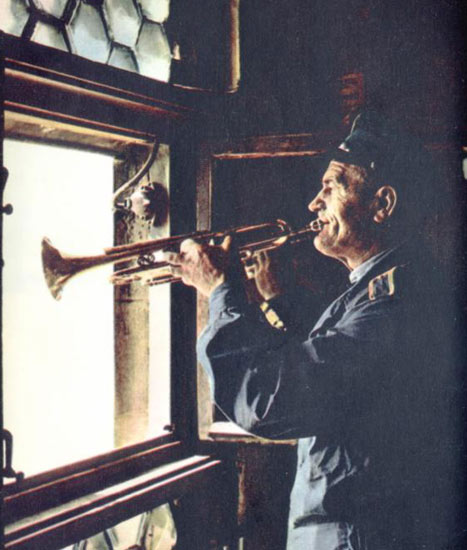 The hejnal of Krakow, which is played from the northern tower St. Mary's basilica, the city's ancient Gothic church, is amongst the most picturesque of Krakow's customs. It has continued almost without interruption for some seven hundred years.

The hejnal is played each day, on the hour every hour, (regardless of time or season), from the north, south, east and west windows of the tower (to the four corners of the globe). The tradition is looked upon with affection by Cracovians and Poles alike, and since 1927, a recording of the melody has been played daily on Polish national radio.

If you listen closely you will notice that the tune seems to stop suddenly in midnote. This is in keeping with the legend, when a noble watchman was struck down as he sounded the alarm.

Late at night in winter months, you may also notice that the tune can get a little wobbly, not to say quicker. This is hardly surprising knowing the Polish winters, and how high above ground the trumpeter plays. It certainly has nothing to do with local predilections towards vodka.

Responsibility for the job lies with the local fire brigade, and they are very much proud of their role. The rota is shared by pairs of firemen, who spend several days up in the tower at a time. There are in fact plenty of creature comforts up there, as can be witnessed during the Summer months, when it is possible to climb up the tower. It is well worth the hike - not simply due to the charming medieval interior, but also as the view is spectacular.

You can hear the sound of the trumpet from pretty much the whole Old Town - it is very evocative, sad almost. We loved our stay in Krakow in July this year.

I was lucky enough to visit Cracow in January 2008 and stay in the centre of the city. We loved the sound of the Hejnal being played on the hour every hour. Reminded us so much of the history of the city.

The name of the book is "The Trumpeter of Krakow," Eric P. Kelly, copyright 1928. It won the Newbery Medal in 1929 as "the most distinguished contribution to American literature for children."

JMJ As Therese says below, there is an excellent children's book, and I can't think of the author right now, not well known, which tells this story. It would not bore an adult. I have read it with my children many times. And we have looked for the actual music on the internet and found it. It is all worth the effort!

Great legend. So cool that someone still plays everyday...!

I had to make a project about Krakow at school and I was delighted to find out so beautiful things about this city...I hope I' ll have the chance to visit it some day

Love this story. Hope to climb the tower for real one day!

We managed to climb up this tower as it seems its open to tourists a few hours a day. Amazing views and great to meet the gallant trumpeter himself!

Cute story. Amazing that a guy is still playing that tune!

I remember reading about the Trumpeter of Krakow in my gradeschool reader (Archdiocese of Chicago, circa 1960). I loved the story and have never forgotten it. It was heartwarming to hear about this tradition.

apparently when the Poles who fought at the bloody battle of Monte Cassino finally took the fortress they played the hejnal. good story anyhow and well told. look forward to hearing the trumpet call when i'm next in Krakow...

Great story, which I demonstrate in my talks "Tuneful Tubes?" - a light hearted history of wind instruments. How about including a recording or video clip of the trumpet call as done on other sites?

We had read about the trumpeter before arriving in krakow. When we actually heard it, we thought it was the most charming and moving tradition we had ever encountered.