Amber, The Gold of the Baltic

For most of us, it's a certain film scene that comes to mind at the mention of the word amber. Yes, a diligent worker is chiselling away, deep in some cave in a far-flung jungle. And then there it is. A honeyish, transparent treasure, and at its heart a single mosquito. The professor is over the moon, a whiz scientist gets to work, and before you know it an entire carnival of dinosaurs has been created....

But Alas! Did we not learn the lessons of Mary Shelley's Frankenstein? It seems not. Indeed, cruel fortune strikes and in no time at all T-Rex has gone on a human-munching spree. It's now up to Jeff Goldblum in his slick shades to come and save the day..... 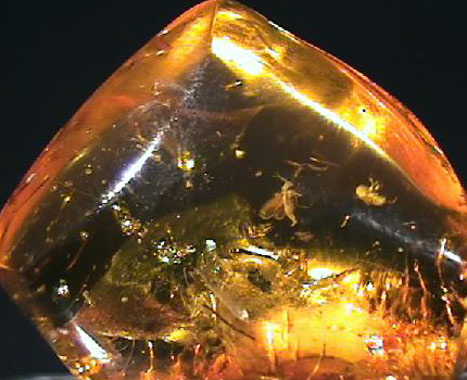 OK, enough of Jurassic Park. And whilst it is true that amber can perfectly preserve all kinds of creatures, from mosquitoes to lizards, the value of amber is not confined to the extraction of dinosaur DNA.

Far from it. Here on the continent amber has been venerated since time immemorial. However, this was for its artistic rather than its magical or scientific qualities. The so-called 'Gold from the Baltic' was prized by kings and magnates for its versatility and beauty. Artists were showered with privileges if they were able to rustle up an amber sensation. Polish King Sigismund Vasa (1587-1682), had an especially soft spot for the stuff, and he enjoyed having a go at crafting the material after a long day spent annoying the Polish nobles. One of the wonders of Russia was Peter the Great's 'Amber Room', an exquisitely crafted chamber fashioned entirely from different shades of amber. The 'Amber Room' disappeared into thin air during the Second World War, prompting a host of speculation from historians and who-dunnit theorists.

Yet before we get carried away on historical tangents, just what exactly is amber? Well, any authentic Gold from the Baltic should be of the grand old age of 40 million years old. Baltic amber is fossilized resin that was washed down ancient rivers from prehistoric forests in the whereabouts of today's Scandinavia. There are major deposits out at sea off Russia's Sambian Peninsula. Most of the stuff that gets washed up on beaches is erroneously sold as copal. Craftsmen call this material 'young amber' but the best stuff comes from further out to sea.

The crafting of amber has been big business in Poland since medieval times. The bustling Baltic port city of Gdansk played a key role in this. Gdansk had a reputation in Europe for its superb artisans products, and the city created some of the finest furniture and jewellery in Europe. Polish King Kazimierz Jagiellonczyk enhanced the rights of Gdansk's amber craftsmen in 1477 by allowing them to form their own guild. Some of the treasures from the Renaissance and Baroque eras can still be found in the treasuries of the Royal Castle and Cathedral at Wawel, not least the venerable 'hobbler' goblet, which was designed by none other than King Sigismund himself.

Travellers to Poland today will be relieved to hear that amber concoctions don't necessarily cost the earth. And whilst dedicated collectors can fork out for a little galleon that's crafted entirely from amber, you can also pick up individual pieces of jewellery for very reasonable prices. A fitting place to begin your search would be the Cloth Hall at the heart of the Main Market Square. This splendid building has housed merchants stalls for hundreds of years. If you're looking for something more specific, or something that's out of the ordinary, Tomasz Mikolajczyki's 'Boruni' galleries are well worth a look. Amber jewellery is one of the standouts of Polish contemporary design, and a trip to Mr. Mikolajczyki's galleries will demonstrate why. Marvellous stuff.

Where to buy Poland amber

Hello Kuzina, Thank you for your response. May I have a look at your collections please before I narrow down my preferences. How do I view your items? Do u have an online store? Thank you and have a wonderful summer!

Hello sir, Im doing jewelry business. My brother recently have migrated to poland,i think it would be a good opportunity to check this Amber business potenial. I am very interested to speak with you on WhatsApp. Please have my whatsapp number: +971 54 476 8092 Hadi Sharifi Email: Hadisharifi@gmail.com

Hello sir, Im doing jewelry business. My brother recently have migrated to poland,i think it would be a good opportunity to check this Amber business potenial. I am very interested to speak with you on WhatsApp. Please have my whatsapp number: +971 54 476 8092 Hadi Sharifi Email: Hadisharifi@gmail.com

Hi, where can I buy authentic amber with insect in it that comes with a certificate of authenticity? Would appreciate your good recommendations. Thank you.

wholesale i need? any suggestions??

I am in Canada, do you sell the stones locally???

When buying amber in Krakow which places give you a certificate showing authenticity of the amber as I would not know how to tell if something was fake or real. Thanks.

I want to sell insects in amber fossil stone.

I want to buy insects in amber fossil stone

Hello i want to buy amber. How can i do ? Thank you

Well, if you are in Poland there are many stores selling amber and amber jewellery, even now you can find it on stalls at the Christmas Market. If, as your comment suggest, you are in Finland - you can easily have it delivered from one of the stores in Poland or even simply purchase it online. :) If you would like me to send you the names of stores or a website, just ask and I will send you the information you require :)

Please can I have the shop name and website please

I want address for amber store thanks

I am in search of a baltic amber honey marquise stone, My daughter brought back a flower pendent from Poland and the stone fell out. Thank you in advance for any suggestion were I can buy a replacement stone. Melanie

The best Amber is from Poland or around there. It not from places like China, as it would not be real Amber

can you contact me ,beacouse i want to buy some high quality amber. my email is ma_jingtong@163.com, i gratitude for you recommend. thanks

A witty and informative article. My husband has been giving me lovely Polish amber jewelry for our last two anniversaries and Christmas. I gave him an amber ring for our 45th too. Because of our Polish ancestry, this jewelry has much meaning for us. Thanks for the info!

Hi, I need to find some good contacts of amber dealers in Poland, so please help me that how i can find their contacts.

You can buy good amber in Gdansk

I have an Amber piece from Gdansk Poland. Are you looking to buy?

I want to buy can I have your email

Many do not realize that Amber is mined from deep underground using large fire hose like tool that the handler keeps adding pole to go deeper and deeper into the ground, around 400 or more feet the Amber starts to become flushes up by the water pressure! The amount of Baltic Amber is unknown and new reserves are still being hit today, to get the best buy on Amber you need to go straight to the men that mine the Amber, as they are the ones that sell it to the shops that make things from it! Amber is fascinating to me and I just thought I would pass on a little info to others, Good Luck!

Hi, I need to find some good contacts of amber dealers in Poland, so please help me that how i can find their contacts.

i can help you

MY PARTNER AND I BOUGHT A AMBER BRACELET IN THE CLOTH HALL IN KRAKOW IT IS THE MOST STUNNING AMBER WE HAVE EVER SEEN WE BOTH JUST LOVE IT.

I recommend to shop on Grodzka 60 Boruni. I bought some amazing stuff there!!! Service was very helpful!!! Thanks.

I think you should say where they best place is. I went to the cloth hall and they had some good stuff but I know there's better. You should really the truely best amber shop. Thank you for your time. Alice

I heard that amber deposits on the Baltic have almost run out. Is that true? Love those Krakow jewelry amber shops!

i bought a few bracelets and a ring made from Polish Amber while visiting Poland.not a bad price either in Sosnoviech.and the big castle we toured had some in the gift shop.nice.

my friend told me her brother has many amber.He found it in the island of southern Thailand amoung up to 70-80 kilogram. How can she buy it and what's it price? her name is anna she live in samui thailand. Thank you.

my friend told me her brother has many amber.He found it in the island of southern Thailand amoung up to 70-80 kilogram. How can she buy it and what's it price? her name is anna she live in samui thailand. Thank you.

i love the honey colored. do average people go along the beach and collect it. i lived in new jersey . i never heard of people collecting it on the beach.

is there anyone that can send me a piece of amber

To bad I don`t see Latvia or Lithuania mentioned in this article. I believe they play the major role as well as Poland. Even from the times of Roman Empire trading amber through amber road.