But anyway, we're straying from the point. This particular funny looking fellow is called Piotr, and he has been sitting at the Vis-a-Vis bar since time immemorial. So long in fact, that he continues to sit there even though he has been dead for many years: a great artist has made a sculpture of him. Piotr is a small fellow. He has a funny looking beard, and a funny looking hat. He looks a bit like an overgrown fairy. One thing is certain though, come howling winds or pelting snows, he always has a fresh flower clasped in his hand, usually a rose. Who puts the flower there? Who is Piotr? Why does Krakow have so many funny looking fellows?

We can't answer all of those questions, but we can tell you a little about Piotr. For Piotr was the moving spirit behind the Pod Baranami cabaret, a heady enterprise that became a legend in its own lifetime. 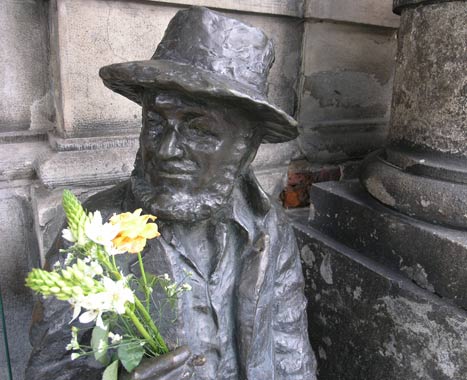 Now, the Vis-a-Vis bar occupies a tiny room at the front of the Pod Baranami (Under The Rams) Palace. And it was in the cellar (piwnica) of that palace that the cabaret made its home. You may have heard how miserable it was in Krakow after the war, with no freedom of speech, nothing in the shops, no foreseeable end to the eternal dreariness. Well, Piotr was pretty much the only person in Krakow who could ridicule the regime openly, even to the faces of Party apparatchiks.

As the singer Anna Szalapak recalls: "The Piwnica was always a kind of social and artistic club, where people dropped by at their leisure.... (It) had thousands of enthusiasts and friends: eminent intellectuals, scientists, artists, but also strange characters, original spirits, misfits. Piotr, as mysterious as Stanczyk himself, was a sage who understood human flaws, and he was even able to deploy his witticisms at Party officials... Everybody who came to this magical place left in a state of deep enchantment, or at least deep amazement.'

Piotr himself could neither sing, paint, dance nor even play a musical instrument. Yet his very appearance would create a sensation. And as Szalapak recalls, 'both professors and tramps felt at ease in his company.'

Besides the high jinks at the cabaret itself, Piotr was the instigator of many extraordinary escapades. In those times, mass gatherings were by and large illegal, save for a couple of ancient religious processions, but even these were permitted grudgingly - throughout the Cold War every priest had his shadow, one of the so-called 'sad gentlemen' of the Secret Police.

Well, somehow, Piotr managed to organise a series of stirring patriotic events to uplift peoples spirits. These were invariably focused on old school heroes of the kind that weren't exactly top of the Communist wish list. Unperturbed by the lack appropriate anniversaries, Piotr gallantly led such glorious celebrations as the 293rd anniversary of the Relief of Vienna by King Jan Sobieski, the restaging of the liberation of Cracow by Prince Jozef Poniatowski (1809) and the swearing of the holy oath by freedom fighter Tadeusz Kosciuszko (1794). He also conceived the 93rd anniversary of the coming of electric light to Krakow, as well as a special festival devoted to the city's mythical memorial mounds: "I endeavour to transform every moment of my life into a charming adventure," he remarked, and you can still grasp something of that spirit from his funny looking statue on the square.