Ladies who lived on the edge

In Autumn 2005, two extraordinary books were made available to an English-speaking public. One is a biography that was penned thirty years ago, the other a memoir that was written in Polish some sixty years back. Ostensibly, both books seem to tell similar stories. They deal with patriotic women who joined the resistance during World War II, both of whom were born into privilege. The heroine of the former book, Krystyna Skarbek, had a Polish father, whilst her mother was from an integrated Jewish family. The author of the latter book, Karolina Lanckoronska, had a Polish father and a German mother. Both women were technically countesses, although Skarbek was a vivacious tearaway and Lanckoronska was more happy signing by her professional title (she was one of Poland's first female professors). Yet aside from their patriotism and bravery, that's about where the similarities between these two women ends. 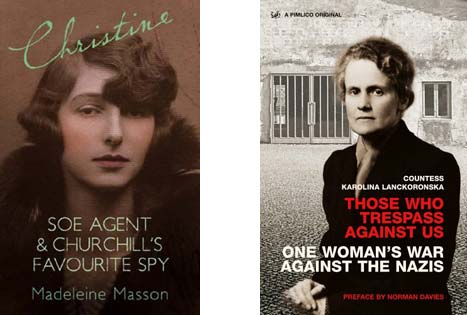 Happy endings are not really overabundant when it comes to the war, but these are certainly very different books. The first is the lighter read. This is the biography of Krystyna Skarbek by the South African writer Madeleine Masson. 'Christine: SOE Agent And Churchill's Favourite Spy' is a genuine page-turner that tears through the orbits of wartime Poland, Hungary, Egypt, England and France. 'Christine' was a daredevil spy who became a legend in her own lifetime. Beautiful and spirited, she was a femme fatale in both senses of the expression. As her friends recalled, even animals seemed to fall under her spell, and the most fiendish, teeth-gnashing Gestapo hounds would be reduced to puppy-like devotion in her presence - a factor that saved her neck on more than one occasion. Masson recounts Christine's hair-raising exploits with verve, and she rarely succumbs to mawkish sentimentality. Although not flooded with source material, the author makes good use of interviews with Skarbek's comrades in arms, and she is always skilful at evoking a sense of place, often to lyrical effect. The reader can't help feeling that there are some big unanswered questions about the heroine of this book - hardly surprising given her job as a spy, and the dramatic way in which she departed from this world. But all in all this is a riveting read with a devastating finale.

If Masson's book often succeeds in charming its readers, Lanckoronska's memoir makes few attempts to do so. 'Those who Trespass Against Us: One Woman's War Against The Nazis' (the publishers choice of title) deals with the author's experiences working for the Polish Resistance and the Red Cross, as well as her imprisonment and subsequent internment in Ravensbruck concentration camp. Her direct, no mincing of words approach may take a little getting used to, but readers who persevere beyond the first chapter will be rewarded. The author's tale is a traumatic one to say the least, but she tells it with immense dignity and restraint. At the same time, the savageness of her odyssey is never glossed over. The historian Norman Davies believes this book to be amongst the most poignant of all World War II memoirs, and it is likely that many readers will agree.

Lanckoronska's account begins in 1939 in Soviet-occupied Lwow, a city that had been one of Poland's key metropolises before the war. The author had held the chair of art history at the university there, but she is unable to maintain her post under the Soviets, who gradually wheedle out the Polish professors (many of whom were ultimately deported to the depths of Asia). The city is quickly reduced to poverty and the persecution of the intelligentsia begins. Already linked to the resistance, Lanckoronska senses that she is on borrowed time and she flees to the German-occupied sector. Of course, owing to her determination to continue working as a courier for the resistance, this is a case of 'out of the frying pan and into the fire', but such questions are academic under the circumstances.

The second chapter of the book deals with occupied Krakow, and those who know the city will find Lanckoronska's recollections a fascinating point of reference. Yet her work for the Polish Red Cross soon takes her further afield, and once more her troubles begin.

We won't spell out the remaining progress of the book, incident by incident. However, it makes for a very humbling read. When reading memoirs, one always wonders the extent to which the author is fair in his or her treatment of other people. Naturally, recollections can be clouded by vanity, bitterness and straightforward hate. This reviewer can only say that 'Those who Trespass...' resounds with the air of an essentially honest book. Whilst the author does not shirk from pointing out the cruelties of her captors, she is also not blinded to the virtues of those that show them. Amongst the most memorable aspects of the book are her character sketches of her many prison inmates, be they of Poland's foes or allies (Ukrainians, Russian Communists or French political prisoners to name but a few). Her descriptions of how people coped under the strain of incarceration and illness are full of wisdom. Of course, Lanckoronska does not go into detail about the troubled background of Polish/German, Polish/ Ukrainian or Polish/Soviet relations. In the author's own words, the memoir was intended to be ''a report - and only a report - of what I witnessed during the Second World War.'' She wrote this account sixty years ago, and it has been published posthumously (she lived to the mighty age of 104). 'Those Who Trespass...' is a harrowing yet dignified book - it has already become a classic in Poland, but its value is universal.

I just read the book, in Polish, and am struck with the great dignity, evenhandedness and clarity of vision the book is written, by this very cultured,very educated and moral and religious woman. She was a rare human being and I'm glad I could share her view/memory of the war I also went through as a child. May her memory be blessed.