Krakow Opera: On The Up

Opera has been performed in Krakow for almost four hundred years. Over the last century, operas were staged in the Slowacki Theatre - itself a miniature version of Garnier's opera house in Paris. But given Krakow's status as Poland's cultural capital, it was only fitting that actors and opera singers wouldn't have to tread on each other's toes for a moment longer. With the 2008/2009, Krakow had a new Opera House, designed by leading architect Roman Loegler.

Culture vultures looking for operatic nirvana will have a feast to enjoy with the new opera house. Poles take pride in their canon of great composers, and the new building should serve as a beacon for up and coming talents. 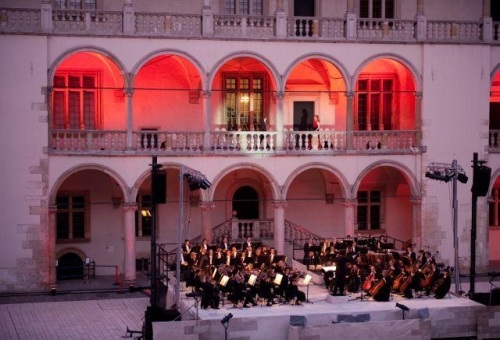 Above: An open air performance at the Barbican during the Summer Opera Krakowska Festival

Historically, Poland has some intriguing homegrown operas to savour. Chopin may never have strayed into operatic territory, but Karol Szymanowski, now championed as one of the international greats, wrote a reputable pair, including the gloriously titled King Roger. In more recent times, Krzysztof Penderecki has kept Polish productions in the limelight, with works such as The Devils of Loudun, based on Aldous Huxley's novel of the same name, and Ubu Rex.

However, the star in the Polish firmament - and certainly the most cherished figure - is Stanislaw Moniuszko (1819-1872), often dubbed 'the father of Polish opera.' His masterpiece is Straszny Dwor (The Haunted Manor), and if you manage to see just one Polish opera, this should be it. With plenty of ghosts, moustachioed noblemen and buxom ladies, it's as Polish as they come. A superb production has been doing the rounds in Krakow over the last two seasons, breathing new life into the old classic.

Opera lovers also have a summer treat in the shape of the Opera Krakowska Festival, an annual celebration of all things operatic that's been held here since 1997. An enthusiastic mix of locals and travellers enjoy performances at historic venues in and around the city (favourite venues are the royal castles at Wawel and Niepolomice).

Generally speaking - although this is unlikely to last forever - tickets for the opera are very reasonably priced compared to standard rates in cities like Vienna or Prague. It's certainly worth giving the new opera house a whirl. This is one of the venues where the future of Polish opera will be shaped.