What's in a name? When Shakespeare asked that question, he had something more romantic in his mind than the name of a city, and yet the Krakow vs. Cracow debate has been going on almost since the time of the Bard.

Other languages have always had their own spellings of Krakow: Cracow, Cracovie, Krakau, and yet to Poles the city has remained Kraków. But in English, the correct spelling used to be Cracow with a C, at least for several centuries as the city then in the Polish Lithuanian Commonwealth found its way into English books. However, within the second half of the 20th century, the spelling more similar to the Polish word began to take precedence. Even Encyclopaedia Britannica, Webster's, and other dictionaries switched their entries to "Krakow".

Perhaps you've noticed that we're keen to use both forms of the city's name in our guide - but what's the correct form? If you want to get technical about it, the official Polish name for the city is Kraków (with the dash over the "o" making it more of a "u" sound), but "Cracow" has been used in the English language for centuries. During Elizabethan times, when Poland was one of the largest countries in Europe, Cracow was written about often in English, and thousands of British businessmen travelled here. On the other hand, "Krakow," once rarely used, has recently come to dominate the anglicised name of the city thanks to modern travel - your luggage tag says "KRK," right? 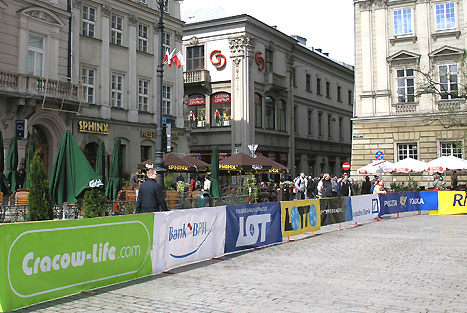 Above: We stuck to the Cracow spelling

If we go by popularity count, a search on Google shows about 139 million hits for "Krakow" and less than 6 million hits for "Cracow". However, if we regard Wikipedia as the ultimate source of all knowledge (as many people do these days), it's interesting to note that both "Krakow" and "Cracow" redirect to their official entry, "Kraków", using the Polish spelling - a fact that has brought much debate on the Wiki forums. And how about the citizens of our fair city? Ironically, here the C has reigned supreme over the K, as going again with Google hits, there are about 22,000 hits for "Cracovian", 984 for "Krakowian", and 806 for "Krakovian". Perhaps it's one of those traditional language things, which explains why a citizen of Warsaw is called a Varsovian in English today.

In the end, whether you spell it Cracow or Krakow it's still technically correct, and you'll notice we use both spellings on our site. When searching for the city's airport or train station, make sure you use the "Krakow" spelling as that is the official name for both. And make sure you don't make the mistake of spelling it "Kracow" or "Crakow" or even "Krakov", as you might end up in the wrong town altogether!

So today, technically both forms are correct - just don't use "Crakow" or "Kracow" - that's just too much confusion for one city to handle!

In Polish it's "Kraków" not "Craców" so I don't see any point in using "C..c" instead of "K...K". As a matter of fact, for English speakers it would be reasonable to spell it "Krakoov" as this would result in a pronunciation closest to the Polish original.

It's feckers like this that insist on calling me Conrad ;-)

I found many people mixing "Krakow" and ... "Kharkow". Maybe better to stay with Cracow... The English spelling is a modified Latin spelling. In Poland we also use modified Latin names of foreign cities: Kolonia (Koeln), Ratyzbona (Regensburg).... Google will return millions of hits for "Krakow" because for the search engine "Krakow" is equivalent to "Kraków" (polish spelling). And yes, when searching the internet it is wise to use both English and local name. Comes funny with Greek or Cyrillic alphabet countries....

Let me guess, whoever wrote this is English or British. It's Krakow. Always will be. Typical British move, trying to demean and inferiorize other nations by changing the way they should call their own cities (just like in India and China) - even when it doesn't make sense! Just as someone else wrote, it looks horrible and phonetically changing the spelling doesn't make sense! Whenever I see anyone, but especially Polish people, writing Cracow, my opinion of them sinks, I assume they must be of very low IQ, and/or that they love to be the bitch on a leash of the English. NEVER EVER WRITE CRACOW. Scumbag post and author here.

You seem to have entered into a self-complacent bubble without EVER thinking from a larger perspective. The anglicised form of the city is "Cracow", just as the German version is "Krakau" and French - "Cracovie". Just deal with it. The fact that an anglicized name of the city exists is not the sign of colonization but rather attests to the cultural and economic significance of the city. Think of Venice (Venezia), Milan (Milano), Munich (Muenchen) or Turin (Torino). Will you also advocate using the local varieties for all these cities?

Michael chill out. We Polish call London Londyn, are we also scumbags for doing that? There are many example of that in our language. After years of seeing internet comments I've come to the conclusion that one of the worst of our national features is getting worked up over silly things.

I was thinking of visiting your lovely City, but I did not realise that the people of Poland hated the English so much. I have also met a lot of Polish people in the UK and find them very intelligent and polite.

Laura, if we start judging countries by what people comment on the internet then we will never leave our houses!

Really? I tried to take a vacation to Poland when I was in Peace Corps Ukraine... (I say tried because I ended up in the hospital 2 hours after arriving in Poland.) Anyway, when I got out of the train station, I could've sworn I saw the spelling on a few buildings that said "Cracow." Up to that point, I'd always spelled it "Krakow." I can look through my pics again, but I thought I saw that spelling in the city itself.

100% agree! I'm from Beijing, and find Peking unpronounceable. Strange that finest universities retain their names in Latin as Peking U and Tsinghua U (instead of Beijing U and Qinghua U). It's really like a bitch on the English leash. Shame on them!

Lmfao getting this worked up over this is both hilarious and pathetic, thanks for the chuckle.p

Because everyone knows the Polish never do that! The correct name for New York is "Nowy York"; London is "Londyn" (which most English can't pronounce properly), Paris- Paryż, Munich/Munchen-Monachium, Rome/Roma- Rzym ... but damn the British for daring to have their own pronunciation.

Good for you Laura! I’ve traveled all over the world and traveled through many countries as the natives do. You can always tell a semi educated idiot buy the stupid and most ignorant questions that I am asked. Such as “why did you come to the arm Pitt of the world when it’s evident that you can afford to travel else where.” My answer is “ Well since you think I’m slumming you must be a very self important person.” I enjoy being with the real people not the ones who think that they are educated.” Polls are very smart. My husbands family comes from Slowata on the Bug river as it’s pronounced by his family. My father in law came from Poland in the early 1900s when he died in 1968 he was a multi millionaire.When he arrived in America he could neither read nor write but he learned and prospered. He bought land cheep and sold it for big money. I guess you could say he was a stupid ignorant Pol Michael. So when you once again tell a Poll that they are stupid and ignorant take a look in the mirror and you will see stupid and IGNORANT! Have a good day

This is how you spell 'Pole' in English, not Pol or Poll. Do check your spelling and grammar before posting and before calling others stupid or ignorant - it makes one look the same if they can't write properly. They may think you are from the armpit of the world.

Micheal, look at the Polish names for London or New York. If you are going to argue a point, at least think it through first. Now luckily (or unluckily) Poland has never been much of a hit in English speaking countries until now. While we do have people using 'Cracow' we also have many people using 'Krakow' or 'Kraków'. Let's take Gdańsk - do you want that to be 'Danzig' in EN? Probably not, so let's just leave 'Cracow' to those people who visit Poland without caring.

Very interesting topic! I also noticed that people use both of those forms - for example we have Cracow Screen Festival, but also See Krakow guided tours (very good, by the way).

'Anglicized/anglicised' would be the word!

Kraków with C looks weird. And Polish pronunciation is something like Crakuf, W/V in Polish and Czech is like V and like F on end of word, not english wh sound. It's funny to hear in Krakow for example castle Wawel with english pronunciation. :-)

Now we know that Krakus-Krak was the legendary founder of Kraków so why would you spell the name of the City as, "Cracow"? One of the first things I did before going to Kraków for the first time in 2011 was learn how to spell it and how to pronounce it properly in the Polish language. I have returned to Kraków many times since then and will never pronounce it as Crack Cow...Simples :)

Well I see you sqiu's down under me are listening. Thats good to know. So a zab to clean should be a good price for a rush job.

Kraków is the only way

Cracow not only looks bad, but is also a pretty useless spelling. Krakow and Cracow have no differences in phonetics. All the English did was make change the spelling for pretty much no reason :)

My family is from Poland and I speak a little Polish myself. Cracow looks ugly to me, I never knew in English it was spelled anything other than Krakow. Plus in Polish, Cracow would be pronounced much differently than Krakow.

You are American, and Americans rarely know anything about the history of Europe. You will hopefully agree that "Oxford Dictionary of Contemporary English" is not a bad source to refer to. And this dictionary lists the entry of "Cracow" in the first place, adding that the Polish version is "Kraków". The US version of "Krakow" (without the diacritic) looks horrible. It is neither grounded in history (unlike Cracow), nor is it faithful to the Polish version "Kraków". The Americanized version of "Krakow" is probably rude to the local people and looks most horrible.

Right on! Cracow is so blahh... but Krakow is the true Polish way. It's Poland, not America. By the way- love the website!! Poland is suh-weeeet!

I really don't understand why Wikipedia's entry reads "Kraków" when their entry for Warsaw is "Warsaw", not "Warszawa". It's called consistency, people! Nonetheless, I think the "Krakow" spelling is the best, because it's closest to the Polish and used more often today than "Cracow", even by native English speakers.

Youre cyber bullying is one of behaviors that makes you unfit to fill any position that has any true responsibilities.