Katowice International Airport ("Miedzynarodowy Port Lotniczy Katowice-Pyrzowice: in Polish, airport code KTW), is located in the town of Pyrzowice, from which it gets its name. At 30 km north of the city centre of Katowice, it's easily accessible from Katowice, which itself is well-connected with bigger cities like Cracow and Wroclaw.

Getting to Krakow from Katowice Airport:

The easiest way to get to Krakow from Katowice is to arrange for a transfer straight from the airport to your hotel in Krakow. We can have a taxi driver waiting for you when you arrive. Name on a board, help with luggage - the whole bit. Just email us for more info. We can help make your travel completely hassle-free!

Another option is taking the train to Krakow, which takes about one and a half hours. The Katowice central station is located in the centre of the city. To get there directly from the airport, take the 'Lotnisko Airport Bus', which goes regularly from the central train station to the airport and back. A timetable for the bus can be found here.

Buses run frequently from Katowice to Krakow. The Matuszek buses run several times a day from the airport to the Krakow Main Train Station. Or, if your Polish is pretty polished, you can try to catch one of the white mini-buses from the centre, which will save you a little time and green, but might not be as comfortable as other options (particularly if you have a lot of luggage). 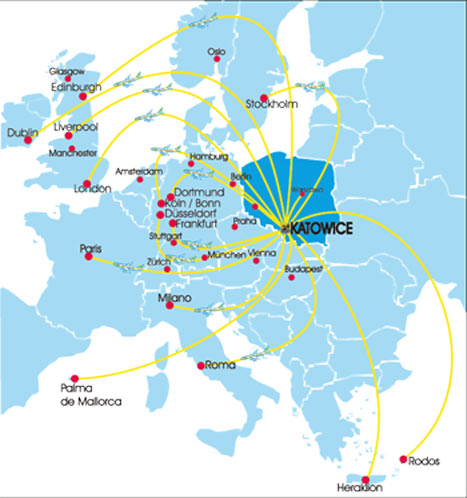 Thanks to the popularity of low-cost airlines, Katowice airport has grown from a tiny local airport to an international hub, most often serving passengers on their way to Cracow. The following airlines now serve Katowice, with low-fare airlines like Wizz Air (probably the busiest airline in Katowice) opening more and more connections regularly:

Be sure to check the airport's official website (in English) for a full listing of connections and departures and arrivals.

I need a taxi from Krakau to Katowice airport , 3 September. Our flight is at 10.45 our 2 persons Thank you

How much in taxi from Katowice to krakow

Hi. My wife needs to go from Katowice airport to krakow airport. There are any bus directly to do this trip. Thanks a lot

I would like to travel from Damascus to Zawiercie by flight is it easy? which flight is better?

Please note an warning for matuszek shuttle bus, they are not pleasent people to deal whith and will try to rip you of.

The link for the shuttle from the airport to Krakow...is that only for Wizz airline passengers? It doesn't expressly say so on the site but all of the banners and timetables are for Wizz air flights??

Hey! I need to get from Katowice airport to Katowice railway station. Is there any transfer? Best Regards, Lena.

I need to go from Katowice to Krakow (and come back), which one is the best way (time of the trips and prize for both)?...thanks a lot

does anyone knows how to go from krakow to katowice airport?

hello!! anyone knows how to get Krakow from katowice airport at 23 p.m?? many thanks

Does anyone know what is the best transport from Krakow city centre to Katowice airport(evening hours). I know tehre is a wizz bus shuttle, but i was wondering do you have to fly with Wizzair to use this shuttle? Thanks

I want to travel to Dylaki in May 2010. What is the nearest airport to Dylaki please?

hello, I would like to ask something, planning to visit Krakow in March for a day, and to fly back from katowice airport back to London, is it worth visiting Katowice for couple of hours before the flight and if not, are there any buses/trains from Krakow to Katowice airport directly? Thanbks a lot in advance!!!

if I someone could help would be wonderful.I arrive in Katowice Krakow in 20.30 and I need to go to Koln Germany .. but only by bus .. do you know how i can get to ? can anyone knows the site for booking tickets on the bus or train?

what is the best to get from katowice to prague or bratislava? is it possible to book a bus to this cities? or better to get to katowice and from there by train or bus?

DON'T go into katowice and make your way to krakow yourself. I got mugged at the train station. I recomend booking a seat on the wizzair transfer bus.

If you are short of money and even don't want to pay 20 PLN for shuttle to Katowice, use local bus to Bytom city, and take a train to Krakow for nothing (it takes 0.5 hr more than trip from Katowice to get Krakow with one change in Katowice, for almost the same price of 15 PLN). Or (when use shuttle) take a train in Katowice (the trip takes less then an hour)for

Your map guide is VERY VERY poor. We don't need a map of central Krakow although it would be nice somewhere on the web site. More important is a map of where the airport is in relation to Krakow, roads, bus, rail, etc.. The TAB marked map should be for this map and not Krakow..!! Regards

Maike, the airport is quite far from the train station, and a cab from Katowice to Krakow would cost you a fortune! Just take a bus, you can reserve and pay for tickets in advance, there's a link to it on this page.

I would like to know if it is the best to oder a cap from you when going from Katowice to Krakow? Or how far is the train station from the airport in Katowice?

thank you for that, but how easy is it to get katowice airport to krakow and back? is it best to book a shuttle bus?

How far is Krakow from Katowice and how is the best way to travel there?

Great small and clean airport, twice flown from and once into, 3 more visits to this area planned in 2008 alone using whizz and Katowice. No issues.