Wroclaw is one of Poland's leading academic centres, behind only Warsaw and Krakow, with over 130,000 students busily beavering away at twenty-two different institutes of higher education. With Wroclaw's residential population of 634,000, this means that one in seven people in town is an academic and this extraordinarily high ration is a major factor in contributing to Wroclaw's status as a young, vibrant and intellectual city.

Wroclaw University is comfortably the biggest of the eleven institutions, accounting for nearly 41,500 students in 2004. Quite a feat if you consider the University's humble beginnings as a Jesuit academy of two priests and twelve pupils! This was back in 1638 when the Habsburgs of Austria secretly patronised the small Catholic academy in a largely Protestant Wroclaw. The academy grew incredibly quickly and as soon as 1659 four hundred students were enrolled with the Jesuits (presumably the teaching staff had expanded beyond two priests by now!) and soon even Protestants were sending their sons to the acclaimed institution. By 1700 it is estimated that as many as seven hundred students were attending classes and the Jesuits sought and obtained permission to open a university. 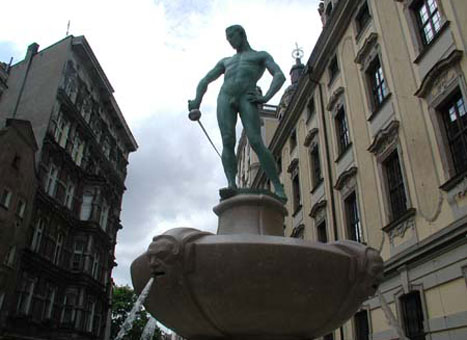 Emperor Leopold I approved and signed the foundation act in 1702, although construction on the main University edifice was delayed until 1728 and then suffered major interruptions during the war with Prussia, when the building was used as a field hospital, stable, storeroom and even a prison. The Prussians won the war in 1741 and the University fell into decline, until in 1811 King Frederick Wilhelm III decided to merge the Viadrina University of Frankfurt with the Wroclaw Leopoldina (as it was then known), giving birth to the modern title of Wroclaw University. The University had five faculties: Philosophy, Medicine, Law, Protestant Theology and Catholic Theology.

For the next one and half centuries Wroclaw University flourished and many more departments, clinics, laboratories and even museums were founded, including botanical, zoological, anatomical and geological collections. The University's excellent reputation also attracted lecturers as prominent as Robert Bunsen and Alois Alzheimer, who arrived to pass on their wisdom to the next generations.

The events of the Second World War however nearly saw the end of the institution, when during the siege of Breslau (the old German name for Wroclaw) the Nazis moved their headquarters into the University library - and as things grew desperate even used the University books as fortifications (they don't make hardbacks like they used to!). When the Soviets finally liberated the city, Wroclaw, including its University, were 70% destroyed.

A new chapter in the history of the University began immediately after the war in May 1945, when a group of Polish scholars and students, called the Scholarly-Cultural Group, came to academy's rescue. The group managed to organize the reconstruction of the near-demolished University in a very short time. Some of the old buildings were rebuilt, and several residential buildings were commandeered for the greater good. Besides this no small amount of effort went into re-establishing the collections of books and replacing equipment that had been lost or destroyed. Finally a number of reputable academics were found to work for the University, many coming from the former Polish universities in Lww (now the Ukrainian town of Lviv) and Wilno (now the Lithuanian capital of Vilnius), and some scholars in addition from Warsaw, Krakow and Poznan.

For those of you whose student days are nothing but happy memories, don't worry! You don't have to be able to down ten pints of snakebite and black to have a wander round the beautiful Baroque edifice that is the University's main building. Its 171-metre-long faade dominates the pl. Universytecki and, although it still houses both the Law and Natural Science Faculties, several rooms are open to the public including the celebrated Aula Leopoldina and the 300 Years Exihibition in the University Museum (1702-2002) as well as the Mathematician's Tower.

If you fancy studying at the institution find out more about the University at their official site. The University also has a special website, called Jungle Book, designed to help foreign students settle into the city. Check it out for more tips on student life in Wroclaw!

Am glad to have a glance about your university

Hello, I will be coming to the university to get my Master degree in Tourism. I want to know about this city and the price of daily life things. And about other things. Can you tell me about that? Please contact me at: wt1131158543@126.com

Hi guys, I need anybody from Managerial Economics faculty. is there anybody who is going to make a master in upcoming year at Wroclaw University. if so, please contact me at aanar87@yahoo.com. Have a good day !!!

I will be coming to this esteemed University in September for my Masters. So looking forward to studying and also having a little fun.

Hi guys - you should find all information required here: http://international.uni.wroc.pl/en

I LEARNT ABOUT WROCLAW THROUGH MY FRIENDS.REALLY,I LOVE EVERYTHING ABOUT THE SCHOOL AND WANT TO JOIN VERY SOON

I want to countinue my study in physics in Phd degree in your university but I don't know how I can enroll or achieve what I want....please guide me

I want to apply for my masters in your university but i don't know how to go about it.....please can you give me guild lines on how to do this...

i want to know,how to apply in Poland universities for study,so please guide me how to apply

i want to apply a university in poland,but i dont know how,so please teach me the way out.

"planning to come in poland for my higher study on tourism management. so, please help me in providing information as a friend. thanking you and all the best." e-mail: walidbin@yahoo.com

planning to come in poland for my higher study on tourism management. so, please help me in providing information as a friend. thanking you and all the best.

hello, looking for a university student. Who would like free accomodation and bills. They would have to clean a small appartment,and wash sheets for 3 other people staying there. The other people would be british cosmetic surgery patients staying in the appartment for a few days. Its a brillant way to learn english and not much work.

The university is a wonderful place, I really enjoyed it.Congratulations it can't be better.

It is really interesting to go through the story of Good Old University in the World. N.Arul Pandiaraj arulpandiaraj@yahoo.com

It is really interesting to go through the story of Good Old University in the World. N.Arul Pandiaraj arulpandiaraj@yahoo.com

Spend the whole evening trying to get to University of Wroclaw website with no success.

IS WROCLAW UNIVERSITY RECONGNISED BY MCI