Prague's many bars and live music venues show that the city is rocking today, but Prague also has a historical relationship with rock music, particularly when it comes to rock, revolutions, and perhaps the most politically important band to ever exist, The Plastic People of the Universe.

The counterculture movement in Czechoslovakia in the 1960s had significant political consequences, setting events in motion that would eventually lead to a revolution named after a rock band, and an ideological leader to be elected the first president of a democratic Czechoslovakia. The beginnings of the hippie movement in Czechoslovakia could be attributed to a general craving in the youth for all things American at the time, and the temporary lifting of several bans and increased access to Western culture. In the early 1960s it was rock bands like The Beatles and The Velvet Underground, and the subsequent trends and attitudes that went with rock music, which primarily influenced the youth in the country. Hundreds of "garage" rock bands began to appear in Prague, and their performances were at first permitted by the authorities. 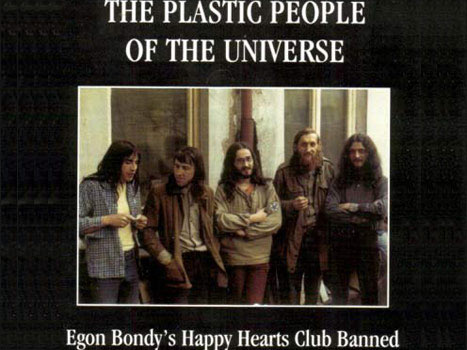 These bands and their listeners began sporting long hair, beads, and flowers as a way to actively set themselves apart from the dominant shorthaired and neatly dressed culture. On January 5th, 1968, Alexander Dubcek became the leader of the Communist Party in Czechoslovakia and quickly initiated a series of reforms to bring about a socialist democracy, lifting censorship and freeing artists and other political prisoners, and beginning the Prague Spring. All this changed on the morning of August 21st, 1968, when the Warsaw Pact invasion brought about normalization, and moved the hippie movement to the underground. Students found new ways of protesting however, such as the suicide of Jan Palach, a philosophy student who set himself on fire in Wenceles Square after the invasion.

This was also the time when one of the most politically influential rock bands in history formed, The Plastic People of the Universe, who were mainly influenced by such counterculture American bands as the Velvet Underground. Though normalization strictly curtailed their power, even revoking the band's professional license and banning their recordings and live performances, the Plastic People continued to perform in secret shows, often in farmhouses on the outskirts of town, or in Vaclav Havel's own country house. The band's leader, Jirous, attempted to create an official "Second Culture" in Czechoslovakia, separate and opposed to the totalitarian "First Culture," and organized the First Music Festival of the Second Culture in 1974, where hundreds of youth gathered in an event comparable to Woodstock in spirit, though not in scale because of the constant danger of the authorities. When the band attempted to hold the Second Music Festival of the Second Culture in 1976, the Secret Police arrested 27 musicians, including the Plastic People. In a following show trial, rock and roll was taken to court: two members of the band were sentenced to 8 to 18 month prison terms. However, it would be this trial that would go on to inspire the important organization called Charter 77, gathering in solidarity with the persecuted musicians and propelling Vaclav Havel into the forefront of the resistance movement, which would eventually topple the Communist government in November 1989, in the Velvet Revolution, whose name would be taken from the inspiration of the Velvet Underground two decades before. When Velvet Underground founder Lou Reed met Havel in Prague in 1990, Havel revealed what an inspiration the band had been to the hippie movement of Czechoslovakia, telling him, "Did you know that I am president because of you?"

Interesting. When I first heard the term "Velvet Revolution", I immediately thought of Lou Reed and the Velvet Underground. And then I thought, "No, just coincidence that the names are similar". Very surprised. But then again, anyone who has ever listened to the "Velvet Underground Live in 1969" vinyl album might be swayed to name their children after this album! Thanks, I enjoyed reading this. Keep on Keepin' on, Marcia Musial