Spend any amount of time in Prague and you can't avoid references to Kafka - from plaques on his former homes and schools to the Kafka Museum (of which a particularly Kafkaesque passageway is shown in the picture below) to those cute Art Explosion postcards - Prague is Kafka. And even if you've never read The Castle or The Trial, you'll still get the feeling that Prague is Kafkaesque. So who was this great mysterious writer who gets his own adjective? 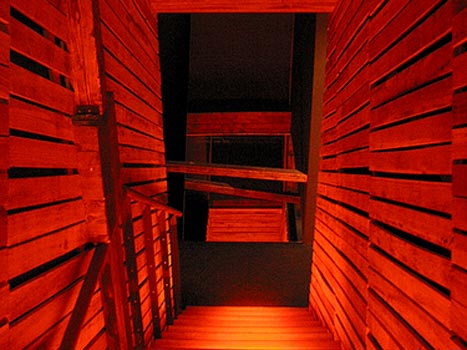 Franz Kafka, born in Prague in 1883, came from a Jewish family who spoke German as their native tongue (as many people did in Prague when it was part of the Austro-Hungarian Empire), though he also spoke near-perfect Czech and some French. Although he didn't publish much during his lifetime (almost all of his works were published posthumously), and he always worked a regular job (as a legal clerk and insurance officer), Kafka considered himself a writer first and foremost, with his "proper" jobs earning his survival and serving as masks behind which he could hide his true literary persona. Thoroughly immersed in the bureaucratic quagmire of the insurance company world, the alienation and absurdity of bureaucracy often entered his writing, particularly in The Trial.

Kafka is best known for his shorter work, The Metamorphosis, in which a man wakes up one morning to find he's become a giant insect. Like most of Kafka's works, The Metamorphosis is a metaphorical examination and critique of modern society. In addition to often being physically ill, Kafka fought many mental demons in his lifetime, all of which wormed their way into his works. Kafka's father, Hermann, a "huge, selfish, overbearing businessman," was a domineering figure who would forever haunt the writer's life and work. Though many would call his works pessimistic or even depressing, much humour was interlaced within his stories as well.

The City of K.

Kafka's life was inescapably shaped by Prague, and particularly the formative years of his childhood and early adulthood. He attended the German boys' elementary school at the Fleischmarkt (meat market) on Masna Street, and he went to synagogue in Jozefov four times a year with his father. After elementary school, his secondary education took place on Staromestske namesti, within the Kinsky Palace in the Old Town. Kafka studied law at Prague's Charles University, during which time he would meet other writers and fall into a literary circle in Prague.

Some people speculate that the mysterious, unapproachable castle in The Castle is actually the Prague Castle. Though Kafka never specified a particular setting, literary experts still have their conspiracy theories. In fact, so many of his stories seem unclear or unfinished not simply because of Kafka's style, but because of his death and his postmortem instructions for his manuscripts. Kafka had struggled with tuberculosis since 1917, and it led to his death in 1924. He had left instructions with his friend Max Brod to burn his manuscripts, but luckily for us all Brod disobeyed his wishes and set about to editing and publishing the works, even though some, like The Castle, were never even finished by Kafka.

Though all that remains of Kafka in the city today are literary fingerprints left on its cobblestones, Kafka's Prague is still very much alive, and one can not only follow his daily path between his childhood home and his school (as shown at the Kafka Museum), but even sip cappuccino and discuss literature at Kafka's favourite cafe.