The Mexican has 0 votes. Click here to see the results.

A new outlet of a successful chain, The Mexican has made its Cracow home on Florianska Street, a stretch of the 'Royal Way' that sweeps through the heart of the city. Those hankering after some tucker from the land of Tequila should head on over for their tortilla fix. All your classic options are on the menu, from tacos to quesadillas, and prices are reasonable. Pictures of gun-slinging bandits adorn the walls, and you can order up some Desperados beers to help get the party going.

Visited Krakow for our honeymoon and we ate in The Mexican a lot. The decor is amazing, the staff could do with smiling a bit more and being a little less arsey but the food and the price MORE than made up for it. Would come back to Krakow for a meal here alone! Also the best Blue Lagoon cocktail I've EVER tasted.

Visited Cracow last week and had dinner at the Mexican, the interior and atmospere are nice and the food is good value for money.

Bad food and disappointing service. Sadly, the only positives are location & decor.

I am sorry but people must just go to pick faults because we went here just a few days a go and it was fantastic. We even had the luxury of zoro style entertainment. The valuie deal is great aroudnd £3.80 for the meal and 80p a pint. You really cant go wrong.

Sadly, this place is not good at all. We left after a starter which was a plate of tasteless, stale nachos and watery salsa. Waste of time. 2 points for a decor.

First of all I would have to wholeheartedly disagree with most of the reviews which have been previously submitted. Me and a friend have eaten here on numerous occasions and never had a problem. We have sampled many different dishes and always been satisfied. I agree the quality may not be Michelin star but you have to remember you are getting what you are paying for. Lovely decor, happy and helpful staff and nice food at reasonable prices; if looking for a quick bite I can't fault it.

4 of us went on the 27th June., we ordered a selection of Veggie dishes and had no complaints at all. Yes the Jalapino peppers are hot! Aren't they supposed to be? The Burrito portions were large and came with 3 bean, guacamole with onion, rice and sour cream. Yummy! We smoke so it was nice to have the choice to sit in the smoking area. We drank Coronas and tried on the Mexican hats for photos. 100 zl for a group of 4 is very reasonable. Ok the staff don't speak Spanish as they are Polish but you dont expect to go to macdoughnuts and expect to hear American in Krakow either.

On one hand, the Mexican is a great place. Good location, comfortable tables, pleasant themed interior, nice front window tables right off Florianska and free soft-drink refills. On the other hand, the food. I had two chicken tacos and they weren't bad, but they weren't special, either and certainly not made in a Mexican style. Worse, it came with the dreaded f#$@&n surowka, the Polish cabbage that clings to every dish like a parasite. I swear that's become my golden rule now: Surowka on my plate at anything but a Polish restaurant knocks it down to near-automatic fail. At least ask if I want it and don't automatically put it on.

Anyway, back to the point. The food. My wife had a vegie burrito. Mexican food is by its very nature, mostly vegetarian: beans, rice, tortillas. Most Mexicans eat a fairly vegetarian diet, adding chicken or beef on occasion. But of course, in Poland, vegetarian to a chef here means, "I have no freakin' clue so I'll just throw all my random vegies in a pile and call it an entree." The vegie burrito was a disaster and had no taste. It's really sad, because it could easily be the best entree on the menu. The Mexican is a Polish franchise and it's hard to see why, outside of the kitsch (the well-trained waitstaff wear western clothes and celebrate birthdays with sparklers). It has the chance to be damn good Mexican but settles for safe, Polish-tinged froth.

Sorry but the food here is just awful, i had the chilli con carne and it tasted as if it had been reheated quite a few times, the waitress was polite and friendly but thats about it.

The decor is nice and that's just about it.

The thing that really dissapointed me was the fact that the waitress had absolutely no idea how to read spanish words which is unacceptable in a restaurant which claims to be mexican. It's really just a few words. I would imagine the owner giving the stuff just a quick training on that.

I went in with my wife just for a snack so we didn't order much but what we had was of poor quality. I wouldn't recommend this to anyone. There are lots of far better places serving mexican food in Krakow.

I asked if they had frozen margaritas when I arrived and they said yes. My idea of frozen is something that has been blended. Not something with ice in it which is just a normal drink. Needless to say it arrived with just ice in it. It also tasted awful. I had one sip and didn't have another.

The jalepeno poppers were ok. I love spicy food but they were a bit too hot even for me. The chicken quesadilla was bad too. I expected to get some cheese, chicken hopefully some onion and maybe red peppers. All it was was salsa and chicken and very soggy.

I love Mexican food but would not recommend this. We were staying directly opposite which is why we went there as we were too tired to find somewhere else (we had been up since 5:30).

I would not recommend it at all.

The only good thing about this place is a chocolate pudding, which is a shockingly great standard compared to bland and microwaveable food served (my burrito was filled with a selection of half frozen broccoli and green peas in it). I was really hoping for a good Mexican in Krakow, especially that the decor of this place is truly beautiful.

Hmmm.... I agree the food is not that great, but I did not have the same problems you did! Agree about the cola thing where you have to keep filling up your cup - it's a bit cheap and I don't like it. I did, however, like Zorro appearing with my pudding - kitschy but fun (or maybe it seemed that way because I was pretty drunk!) I give it a generous 6 out of 10.

Just because I have close friends in Mexico who take me to the best restaurants there doesn't mean I'm inclined to give a cheap Mexican place a bad review. I would give it a good one if the food was tasty. I have been in Krakow for 3 years now, eating at multiple 'Mexican' restaurants and I have to say that not only is this the worst one of them all, but I am tempted to say this is the worst restaurant I've been to in the whole city. And that includes the cheapest 'milk bars' meant for the poor.

Details: the beer I received as completely flat, skunked and warm. When I asked for another one the server (Tomasz) gave me a very long evil look and then declared loudly to the bar-woman that I was claiming the beer was bad. The second was was the same as the first. I didn't even drink it because it tasted like metal.

I couldnt believe they didnt have beef tacos. That is the staple of mexican food. It was shocking. So instead I ordered chilli. Bad mistake. I won't go into it too much but let's just say that it was a disgrace to chilli everywhere and I didn't eat more than 3 bites.

My wife ordered a burito. The wrap was made of cardboard. It really tasted like that. The guacamole it came with was a nightmare. It was unripe acovado blended into a watery mush.

The cocacola my wife ordered was made for HER to go and fill up in the back of the restaurant. Finally, the server was unkind and never came to ask how things were, how the food was, etc. Perhaps he already knew the answer to those questions.

I'd say the most awkward moment of the whole mal was when a spaniard came in asking who spoke spanish there and all 6 servers and the barman, who were just standing around chatting, couldn't speak a word of spanish.

Please do not come to this restaurant. I don't think it deserves to be in Krakow, where the food is generally very tasty.

Add a widget for The Mexican to your website and get more reviews! 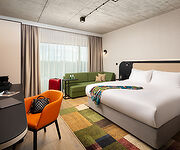