Zoom In On Zamosc

So much attention is given to Krakow, Warsaw and Zakopane that travellers could be forgiven for thinking that there simply are no other worthwhile destinations in Poland. But hobbits prepared to head off from the normal routes will find some pleasant surprises.

Picturesque towns such as Torun, Tarnow and Kazimierz Dolny are beginning to come into bloom. And over in the southeast, there's the intriguing pair of Lublin and Zamosc. Lublin, with its stupendous royal castle, is one of the most evocative old cities in Poland. And coupled with the more diminutive charms of Zamosc - a UNESCO listed gem - you've got the makings of an inspiring trip (and for the time being, one that's free of hordes of package groups). 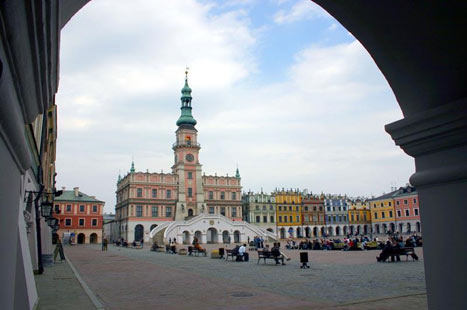 Above: The Rynek (Market Square) at Zamosc. Image courtesy of Marek and Ewa Wojciechowski

Every Renaissance bigwig worth his salt had something to say about the citta ideale - the ideal city. However, there was one slight hitch - Leonardo and chums were rarely able to find someone capable of funding such fantasies. But in the late sixteenth century, a Polish nobleman by the name of Jan Zamoyski decided to put their ponderous plans to the test.

Zamosc was not supposed to be epic in scale (it's more regal town than titanic city) but as a crystallization of those lofty Renaissance ideals, it's the most interesting, albeit least known example of its kind. Zamosc was located in the midst of Zamoyski's ancestral lands. Like many Polish squires, Zamoyski had been educated partly in Italy, and he chose an Italian, Bernando Morando, for the job of designing the place. Jan Zamoyski was not the main heir of his family, but his comet-like rise on the political scene made him one of the most powerful men in Poland. As both Chancellor and Commander-In-Chief of the armed forces, he was arguably more influential than the elected king.

The design of Zamosc realized the bids for harmony and order that Renaissance theorists worshipped. Besides a logical, geometrical lay-out, and houses built in modular fashion, the plan also echoed some of the more metaphysical ideas of the day. In keeping with several famed Italian treatises, the town plan echoed the human body, with the palace at the head, the main church as the heart, the town square as the stomach, and the bastions as limbs. Anthropomorphism, as they call it (one to remember for your next game Scrabble).

A Haven of Tolerance

Although Zamosc was originally designed with Polish Roman Catholics in mind, Zamoyski was a champion of religious tolerance at a time when Poland was one of the few states in Europe that was not plagued by religious wars. As the town's plan developed, Zamoyski made provisions for a synagogue, a Greek Catholic Church and an Armenian Catholic Church. Turks and Scots also settled in the town.

Zamoyski was himself a scholar, and he founded a prestigious Academy which employed some of the most brilliant minds in Central Europe.

When Poland was gobbled up 200 years later by Russia, Austria and Prussia, Zamosc fell first to Austria and then Russia. The Zamoyski family - still active - had to move out, and Zamosc was turned into a garrison town. When Poland regained independence in 1918, renovation works began, but the Second World War was not far off.

The Zamosc region suffered badly under the Nazis, and it was intended to be a bastion of German resettlement in the East. The Jewish community was annihilated, and Polish towns and villages were cleared to make way for German settlers. Some Polish children who looked 'Aryan' were handed over to incoming German families. The Red Army arrived in 1944 and Poland soon found itself turned into a Communist state. Independence came in 1989.

Zamosc is a sleepy town that's gradually finding its feet in the new free-market reality. Travellers shouldn't expect dozens of Michelin-starred restaurants or achingly hip bars (although you can track down one or two snazzy spots in neighbouring Lublin). What you will find is a treasure trove of beautiful architecture, a smattering of homely bars and restaurants, and friendlier locals than you'd encounter in Krakow or Warsaw.

Highlights include the Rynek (Market Square) with its showstopper of a town hall. Also the Armenian merchants houses, with their ornate parapets (No.30 houses the charming town museum). Zamosc also boasts several beautiful churches and one of the finest synagogues in Poland - sadly there is not much of an actual Jewish community anymore.

Accommodation wise, the Hotel Senator is your most charismatic choice. It's owned by Witold Paszt, a Zamosc bloke born and bred, star of eighties pop combo VOX. A decent, but plainer choice is the Orbis Zamojski Hotel. The cheapest option in town is the old youth hostel by the synagogue.

On the restaurant front, there's a fairly modest selection, your best bets being the Muzealna by the town hall, and the restaurant of the Hotel Senator.

If you're new to Poland, we'd recommend the Krakow, Lublin and Zamosc route. (You'll have to fly to either Krakow or Warsaw). After two or three days in Krakow, take a train to Lublin (5 hours), a city that's also worth a good couple days. From there you can take a bus or train to Zamosc - two nights will be about right. Last but not least, nature lovers can branch off to the nearby Roztocze National Park, 15 kilometres away. It's approached via Zwierzyniec, which also has a charming old brewery, once owned by the Zamoyski family.

If you're looking for more information on Zamosc Poland then why not head to Zamosc's official website.

Excellent information regarding wonderful Zamosc. Have been twice in recent years(2008 & 2010) in an official capacity for cultural exchange visits. Local people are friendly and polite, are proud of their heritage and are hard working. Can only admire the polish nation as a whole, for overcoming tremendous hardship and regaining your freedom from fascism and hardline communism. I have told my friends and colleagues back in England to visit Poland and Zamosc in particular. It is wonderful to be able to go for a drink in the local bars and witness whole families enjoying being together and to be able to hold a conversation with friends without having to put up with unruly and anti social behaviour from young people as we have to back in England. We love you, Poland.