For Your Freedom And Ours

For Your Freedom and Ours
The Kosciuszko Squadron: Forgotten Heroes of World War II
By Lynne Olson and Stanley Cloud

Last week, while waiting for some friends in a Krakow hotel lobby, this reviewer stumbled across the following note in the guest book:

7 November 2005
In 1944/5, 308 (City of Krakow) Squadron was stationed and operated from an improvised airstrip on our family's land near Lewes, Sussex, and left an indelible image of courage and cheerfulness which is still evident in this charming hotel and delightful town

The receptionist remembered the couple who had left the message, and added that they'd been looking - unsuccessfully as it turned out - for some of the pilots that had left such a powerful impression all those years ago.

It's a touching image, and as 'For Your Freedom And Ours' reveals, one that aptly reflects the bonds between British and Polish pilots during those times. Yet fifty years on, few Brits remember that 1 in 8 of the pilots in the Battle of Britain were Poles, or that the Poles eliminated more Nazi aircraft than any other group. And this in spite of the fact that the RAF High Command and pilots themselves remained resolute about the Polish contribution: 'Without a doubt we could not have won the Battle of Britain without them,' veteran Peter Burke recalls. 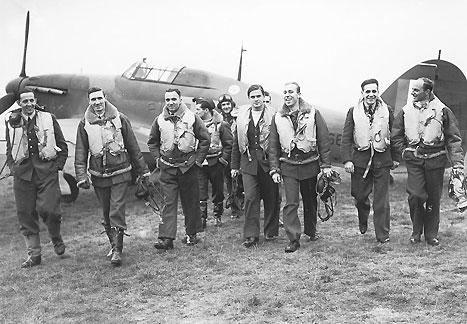 Above: The Kosciuszko Squadron return to base

This reviewer admits that he has never been desperate to pick up a book about pilots, and he has an inkling that although many readers will leap at the chance, just as many will not. But here is a book with such a powerful story that it transcends simple pigeon-holing. Not only that, we've a hunch that even those without the faintest interest in aviation will soon be hooked by the heady exploits recounted. Such is the momentum of this fantastic book that you can hardly fail to be swept up.

The odyssey of Poland's pilots is an extraordinary one, and the American husband and wife team behind this book have focused on five characters, drawing on memoirs, interviews and diaries to weave their tale. Throughout, the events are expertly framed in the wider orbit of the war and Poland's unfolding destiny.

For anyone like this reader who has only the haziest grasp of what went on in the Battle of Britain, this book brings it all to life with searing immediacy. Just how touch and go the whole thing was is left in no doubt. And the Poles, who had already seen their country ravaged in September 1939, put up an extraordinary fight. The Polish pilots were initially viewed with uncertainty by the Brits, but the two groups were soon devoted brothers in arms. When unwinding at nightclubs between sorties, RAF pilots would go ballistic if any of their fellow Brits forgot to stand up when the Polish anthem was given a whirl.

Besides the accounts of swashbuckling exploits in the air, 'For Your Freedom and Ours' will also grab readers with the amusing tales of the Poles in wartime Britain. Indeed, it emerges that the Polish pilots - who had been groomed in the old school style by their officer corps back home - were very much a hit with the ladies, what with their fearless spirit and hand-kissing gallantry. Such was their appeal to the natives that even British airmen pretended to be Poles in order to chat up the girls. As one hoity-toity head mistress admonished in a speech to parting pupils: 'And remember, keep away from gin and Polish airmen!'

Nevertheless, whilst there is plenty of jaunty stuff in this book, 'For Our Freedom and Yours' is overarched by a more cataclysmic story. For whilst Britain's RAF have remained loyal to the Poles until this day, this was not mirrored by all parties involved. The balance of power shifted decidedly when the Nazis invaded Russia, and Churchill and Roosevelt's pussy-footing around Stalin is exposed in all its ugliness. The Poles, being stuck in the middle, were in for a very, very rough ride.

It is difficult to do justice to the richness and power of this book in a few paragraphs . Our warmest advice is simply to go out and buy it. The authors admit that they were newcomers to the subject when they began, but through painstaking research, flair and a great empathy for the subject, they have delivered one of the most memorable books written about Poland in recent times. Magnificent.

Republican politicians all over the country have repeated the Great Replacement theory A century-old racist theory reentered the political discourse around immigration and has become commonplace on the campaign trail as Republicans hope to retake control of Congress in November.

As my Polish grandfather was involved in Carpathian brigade as well as other regiments during WW2 I have been reading many books about the Polish military during 39-45. "For Our Freedom and Yours" is a superb book to read. Well worth a look at.

"read widely", I would suggest the same to those making such a comment. Please read comment by "thrombox", who nicely summarizes the problem. http://www.ww2f.com/north-africa-western-desert-campaigns-1940-operation-torch/22023-what-do-you-think-siege-tobruk-2.html

Only just came across this book, thanks to a recommendation, never one to show much interest in war stories... My mother (from Bow - London) and my father from Poland both were in the WAAF and the RAF (one plotting aircraft and the other parachute training) I am halfway through this incredible book! So far I am finding it gripping and interesting with so many details, of course, all seen from our British perspective of WW2, but it corroborates in a way all what my mother tried to tell us about the war-time - about the blitz, the sacrifices, the spirit, etc. and I understand a little more my Dad's frustration with the end result with what happened to Poland. I wonder if this book has been translated to Polish?

Peter if its one thing i hate is someone like you taking sides!Bombing and kneecapping?Its ok for the brits to come to ireland and rape steal and shoot people i know its all behind us but why did you have to be so so bloody english? Its always fucking onesided with ye!!!!! I forgot in school ye were thought the english were heroes hahahahahahaha fucking normal eh? i have nothing against english people my wife is from the uk but it really gets on my tits when people talk this kind of shit! An dont forget there also was a lot of irish killed in both wars did you forget that???????Anyway sorry for the the bad words just drives me crazy ignorant people bye!

Pat Ryan..Your grandfather is either a liar or suffering from senility. If he was in both wars he would have had to be born before 1900. He would therefore have been too old for WW2. Whilst recognizing the wonderful efforts by Polish airmen in WW2 it is an insult to those of us British pilots to say,without reference to records, that Polish pilots shot down more Germans OVER BRITAIN than we did. When you say you have only " Contempt for British and American Governments" bear in mind that it was the Southern Irish that sheltered U.Boats during the war and spied for the Germans.. ( Remember SS Lusitania) I agree with you..and based on personal wartime experience, the Polish were very brave people but always remember,Britain itself,at the time of declaring war on Germany in 1939 was in the depths of depression and had its own back to the wall.... It did not HAVE to go to Poland's aid.. I suggest you read widely,get rid of your blind prejudice,and TALK to those of us that are still alive and served in WW2. REMEMBER.. If it had not been for those of us who served in WW2 you would probably not even have the luxury of writing the misguided,incorrect, and racially biased nonsense.. If you dont like either England...dont go and bludge off them like many of your ilk..

Pat Ryans letter is inflammatory,rascist and ignorant. I happened to have been in the Battle of Britain and witnessed the whole scene especially over Essex and Kent. When Ms Ryan says she " Has nothing but contempt for both Britain and the USA" she sounds typical of those coming from Ireland...Get your facts straight Pat..If you dont like Britain then stay away..stop your own folks bombing and kneecapping innocents,read a little more widely and talk to some English who suffered so badly in the blitz and...Get a life girl,and stop letting down the Irish with your rascist comments...

Just finished reading this book,I,m British born and bred but i,ve always felt for the Poles,My Grandfather was in both World wars,and always said how brave they were,I have nothing but contempt for the governments of Britain and the USA.I have now been living in Poland for past 5 mnthbefore that 8 yrs in Ireland where we had approx 65 Poles working for us.The best people you could not meet.I lost my son18yrs ago in Corfu on a motorbike,one of the first persons to come to me and show any conern was a Polish man Named Ziggy who lost his whole family in Auschwitz sadly he also died about 12 yrs ago,Thanks Ziggy for being so kind at that time Pat Ryan

I have just finished the book and found the story riveting. There is so much for which we, in Britain, should be thankful. The Polish people were badly let down by Britain USA and, of course, Russia. This book tells the story of the courage and determination of the the Polish pilots who, no matter how many raw deals they had, continued with their duties. This is a "must have" book for your library.