Napoleon and the Poles

This colourful exhibition has been given the title 'Napoleon and the Poles,' but it might just have easily been called 'How the Poles Romanticized the Napoleonic Wars'. For in spite of the odd shard of historical reality, the overwhelming majority of the material presented here hails from the Romantic tradition. Nineteenth century oil paintings of valiant cavalry charges abound, as do portraits of swashbuckling generals, likewise the glittering uniforms of the Polish troops themselves. All this combines to create a dazzling picture that is on the one hand true to the spirit in which nineteenth century Poles venerated that generation, and on the other, simplistic in its treatment of the overall experience of those years.

To the Poles, the Napoleonic Wars remain a subject of heated controversy. Many are brought up with the image of Bonaparte as a great hero; a liberator who lit a brief beacon of hope in the recently partitioned country. 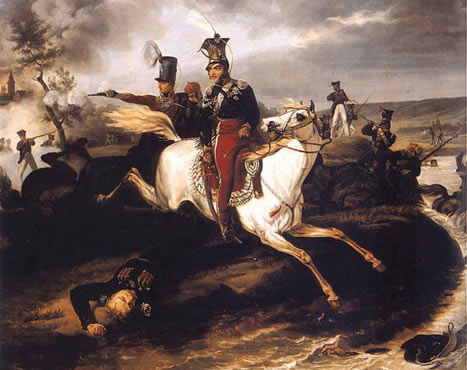 'I like the Poles' professed a young, idealistic general, Napoleon Bonaparte, at Verona in 1797. ''The partition of Poland was an iniquitous deed that cannot stand. When I have finished the war in Italy I will lead the French myself and will force the Russians to re-establish Poland.'

Quotes such as this, not to mention Bonaparte's liason with a vivacious young Polish Countess, Marie Walewska (a portait of whom is exhibited here) have all entered into Polish mythology. The very words of the Polish national anthem are derived from the marching song of France's first Polish legions, which were formed under General Henryk Dabrowski in 1797:

March, march Dabrowski,
from Italy to Poland.
Under your command
we will reunite with the nation.

Allthesame, there are plenty of Poles who have been brought up with the notion of Bonaparte as a monster, a tyrant who cynically milked the Polish cow for all its worth. And Poland had no small worth to the Emperor. His Polish troops were amongst the most distinguished in the Grande Armee, and over a hundred thousand of them perished fighting for the cause. Nevertheless, in terms of the recreation of a Polish kingdom, Napoleon's canny minister, Charles-Maurice deTalleyrand, advised that Poland was not worth 'a single drop of French blood.'

All the most dramatic moments in the Polish adventure are presented in this lively exhibition. The Charge on the Somosierra Pass for example, which was a sort of Polish Charge of the Light Brigade, when a single squadron of Polish Light Cavalry cleared the way for Napoleon's advance on Madrid. Polish losses were heavy, meanwhile, word of their valour spread across Europe. During the Moscow campaign, French nightwatchmen borrowed the cloaks and square-topped helmets ('czapki') of the Polish lancers in a ploy to keep marauding cossacks at bay.

The turning point for the Poles - and Napoleon himself - was the 1812 campaign. The grim Winter return from Moscow took a huge toll on Napoleon's army. Most of the exhibits relating to this campaign concentrate on the swashbuckling, romantic side of things - as most paintings from that era did - but two tiny prints, easily missed, hint at the barbarity of what happened ('Cossacks attacking the French in retreat' and 'Crossing of the River Beresina'.

Besides the paintings, prints and paraphernalia from the epoch, the exhibition is also worth seeing for the uniforms. These have been culled from the collections of the Czartoryski Museum itself, as well as the Polish War Museum in Warsaw. The Polish lancers steal the show here. The lancers were the creme de la creme of Napoleon's Imperial Guard, and they were famed throughout Europe. They had splendid uniforms to match - dark blue and crimson - with magnificent square-topped helmets. The full apparel of a drummer of the guard, replete with a beautifully embroidered crimson and silver velvet saddle, echoes the cult of Polish cavalry, which stretches back many hundred years to the age of the Winged Hussars.

Also to be found are some personal effects of key Polish figures, not least the hero of heros Prince Jozef Poniatowski, who was eventually given the Marshal's baton by the Emperor for his consistent loyalty and prowess in the field. Thus one finds a delightfully crafted pipe (a present from the artisans of Cracow for liberating that city) as well as an embroidered tobacco pouch and silver monogrammed salt spoons that belonged to the Prince. Poniatowski's tragic death, which is well-chronicled here, attained an almost biblical significance in nineteenth century Poland. During the last gasps of the Grande Armee at Leipziq in 1813, the twice wounded Poniatowski spurred his horse into the River Elbe and disappeared beneath the bloody current.

Perhaps the most poignant exhibit in 'Napoleon and the Poles' is a small hand-written document from 1803. It lists the surviving members of the Polish squadrons that were sent to put down an anti-French rebellion on the tropical island of San Domingo. This utterly abstract quest, which saw the loss of several thousand Polish lives, (and saw many Poles eventually joining the anti-imperial black cause) became something of a symbol for the way in which the Poles were exploited by their 'liberating' Emperor.

The romanticism of the Napoleonic Wars, which was a natural by-product of the Romantic epoch, was certainly not unique to Poland, and it is a fine subject for an exhibition. A more balanced introduction to the era might have been created, but it seems a shame to knock such a splendid show. As is usual in this complex country, there are some peculiar historical resonances with regards to the presentation of the exhibition at the museum of the Czartoryski Princes. Prince Adam Czartoryski, (1770-1861) heir of the foundress (and cousin of Marshal Poniatowski) was staunchly anti-Bonapartist, in spite of his deep sympathy for the Polish troops that were fighting for the Emperor. Today - somewhat miraculously in the light of the topsy turvy communist years - the museum remains under the aegis of the Czartoryski Princes. Prince Adam Karol (b.1940) reasserted his rights in 1990, and the museum is now co-run by the Foundation of the Princes Czartoryski. The current President, Count Adam Zamoyski, has just written an acclaimed book on the 1812 campaign. This work, written in English, offers a realistic treatment of Napoleon's adventure, a fine balance to the dizzying, yet engaging nostalgia of this show.

Guy in a cap
Poland

I'd just like to point out that the correct plural form of "czapka" is "czapki".

It is a pity that the brave Poles who liberated Warsaw were used to form the vanguard of Napoleon's attempt to crush the liberty of the Spaniards. Ironic that Napoleon should bear a character, at the northeastern and southwestern corners of Europe, of respectively a liberator and a tyrant!

To understand one's action, you must place yourself in that position. From a simple point of view, you see the Poles as a cannon fodder, for the Poles it was something more. Will you say the same about the Allies who fought the Germans in the Battle of Britain? Where the Poles, Dutch, American’s, etc. the cannon fodder for the British, or was there more?

Certainly, you have a point here. I guess that we were all "cannon food" for the British. They have always been two-faced. I wish the traitorous Winston Churchill was alive for one day in modern world to see how his country is giving in to the Islamists more and more. Haha.

Churchill was no traitorous just a patriot a lider. He was traitorous just for you cause are Pole, but in history there is no emotions, for a british leader, of course England gonna be more imortant than Poland. If Churchill lived today , England wouldnt be a Islamic territory in the first place ;)

Agree with Dale, pretty much cannon fodder all through their history, literally, but thats Poles for you. Guess they got some merit for it after all

Seems like you know nothing about Polish history if you call us "cannon fodder". We never fought in vain. For example Division 303 fought in the Battle of Britain not for British, but for killing as many as possible dishonourable German scums, to avenge our nation.

I believe the Poles were pretty much cannon food for Napoleon,but apparently they were happy with it

Well, who knows? I prefer to believe otherwise. Not everyone are so dishonest and deceitful as the British people. Napoleon, at least, fulfilled his promises and created the Kingdom of Warsaw

napoleon decided to attack Imperial Russia. He did it with hope to win the campaign. What would be a fate of Poland in this case, You cant say he did nothing as French and British in 1939

Who were the generals with the bonaparte army?

A late reply :) if you ask about the Polish generals in Napoleon's army, the main were Jan Henryk Dąbrowski, Józef Poniatowski and Józef Zajączek.