The Lady With An Ermine

Leonardo da Vinci left hundreds of drawings to posterity, detailing everything from bicycles to flying machines. His sketches reveal one of the most extraordinary minds of the age.

However, whilst there are reams of sketches in public and private collections across the world, less than a dozen of the artist's oil paintings have survived the centuries intact. Of these, several are unfinished works whilst others have had their authenticity questioned by today's experts. It's no surprise then that the ownership of the Real McCoy is a major boon for any museum. In fact, that's something of a gross understatement. There are few more coveted objects - treasures indeed - than a portrait by Signor Leonardo. They're the very crown jewels of the art kingdom.

In this light you can hardly resent city authorities for hyping a Leonardo painting. In Paris, "The Mona Lisa" is the Louvre's trump card, and the same goes for "The Lady with an Ermine" in Krakow's National Museum.

But is the Krakow painting actually any good? 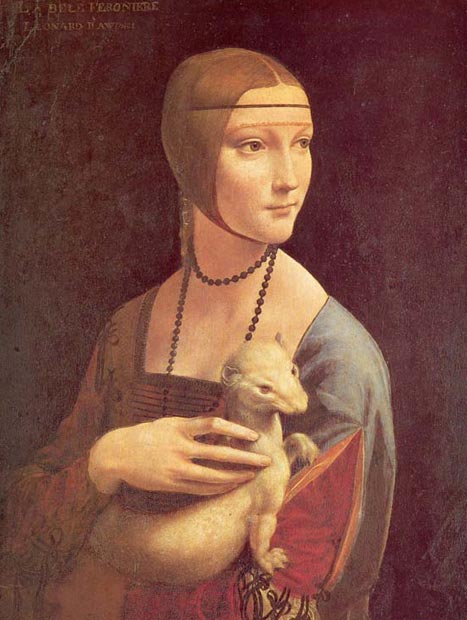 Whilst Leonardo's status as a genius is unassailable, not all that the great man touched turned to gold. "The Lady With An Ermine" is hailed as a masterpiece, a word which conjures up all kinds of head-swirling expectations. There's a specific kind of cult that goes with 'masterpieces'. We are all encouraged to go and bow down before them, and once in the divine presence, we are supposed to feel a sort of revelatory enlightenment. If we don't feel this then we must forgive ourselves for being dim philistines - we tried our best but sadly there's no hope for us....

In the case of the Cracow painting, the actual museum that it is housed in (which has had as colourful a history as any collection on the continent) virtually has to play second fiddle to the Leonardo portrait. It certainly must be a nightmare to insure, a factor that was entertainingly explored in the recent hit film "Vinci", in which a pair of lovable rogues set out to steal the painting.

However, before we jump head over heels into clever clogs territory, it's perhaps worth a look at the painting itself.

'The Lady With An Ermine' came into Polish hands in 1800, after it was bought by the young Prince Adam Czartoryski (later a hero in the fight for Polish independence) during his tour of Italy. The painting was for his mother, a keen collector and the foundress of the Czartoryski Museum.

Princess Izabela may have been a great patriot but her handling of the Leonardo painting would have given modern art historians a heart attack. 'If it's a dog, it's a very ugly one' she remarked on receiving the portrait from the gallant Prince Adam. Taking a disliking to Leonardo's blue background, the Princess promptly had it painted jet black, and then painted on an erroneous title 'La Belle Ferronniere'' (a portrait that now hangs in the Louvre).

Standing before the painting today, you can't help feeling slightly cheated by the black background. It has the effect of rendering the Lady (allegedly a mistress of Duke Ludovico Sforza) as a kind of cardboard cut-out. You feel that she might fall out of the picture at any moment, like a character in a childrens pop-up book (a quality which Monty Python's artist Terry Gilliam had plenty of fun with in his Flying Circus adventures).

As we head further into snooty art critic territory, we should mention on the plus side that the portrait has a striking serenity about it. And the ermine itself is beautifully rendered (few modern artists could have done such a fine job). Likewise, Leonardo's handling of light and shade is as subtle as ever. However, as you'd expect from a painting that's 500 years old, all the tricks that wowed the original audience have long since been bettered by eighteenth and nineteenth century artists.

It's a bit like watching Citizen Kane, the favourite of directors such as Scorcese and Spielberg. If you are pointed out what was a novelty at the time that the work was created, then you'll want to take your hat off to the director. However, like Leonardo, Orson's thunder was stolen long ago.

In this respect you could argue that the portraits of Piotr Michalowski or Stanislaw Wyspianski (both can be found in Krakow collections) are much more engaging than the "Lady with an Ermine".

Much of this is just stating the obvious. And all said, "The Lady With An Ermine" is a fantastic painting - even though it may not astound today. It was exceptional for its time. All the same, we shouldn't feel too ashamed about not being awe-struck by the portrait today.

What is perhaps more astounding is the painting's survival. Forced into exile on many occasions, walled up in hidden cellars in country palaces and then stolen by Krakow's wartime Nazi governor, The Lady has not had an easy ride (The Czartoryski's Raphael is still missing to this day, and an empty frame hangs on the wall opposite the Leonardo).

When the "Lady With An Ermine" was initially retrieved after the Nazi invasion of 1939, an SS soldier's footprint was found on the portrait. It was a fitting metaphor for the attempts that had been made over the centuries to trample Polish cultural institutions, of which the Czartoryski Museum is one of the most radiant. It's well worth dropping by the museum if you're in Krakow - there are plenty of treasures to savour. And of course, no one will begrudge you from saying a warm hello to the Lady. Indeed, it would be unchivalrous not to!

how we can and where a copy of this picture?

You can buy a copy of this picture online. Just go to onto google, type "buy Lady with an Ermine print" and you will see many websites selling them.

The Lady and an Ermine was in July 2016 still displayed on 2nd floor of Wavel castle with an extra security as anyone will understand. If you get to the castle, you can purchase a special ticket just to see the painting, but I had to do some negotiating as I did not want to see the rest of the castle, too many people. You have to go the the inner courtyard and upstairs where you pay for seeing just the painting. It's not that expensive, the painting is displayed on its own in a specially guarded dark room. Czartorysky museum should reopen in 2017, but not sure about an exact date. Definitely worth seeing, much less people than in Louvre, the hand is particularly strange with long fingers, but the painting still emanating an aura of Vinci's special talent.

Thanks for the comment, Dana but actually it is no longer on display at Wawel. It's moved now to the Main Building of the National Museum. It will be on display there from May 19 and has been across the road in their new Cracovia building in the mean time.

She is holding an ermine, But the real name is a stoat.

This is a greta artical. The lady with a ermine is beautiful. Also this artical has helped me with a project on this painting specifically.

does the ermine have a name

what is the thing she is holding

its a ermine or stoat. their in the weasel family. quite cute but, also vicious

the style it was painted in was 'sfumato' hope this helps

Lot's of info but need to know the style it was painted in!!! Plz answer!!!!

I think everyone here has valid comments. I agree it needs more info. but I like how the author views it from both sides.

This painting was the absolute star of the recent Leonardo exhibition in London. Next time I am in Krakow I will definitely try to see her again. Anyone know where she will be displayed? I understand this has not yet been decided?

i much enjoyed lady with ermine in krakow and purchased many reproductions for gifts-would now like to obtain the MONA LISA-anyone know where these reproductions can be found?

I'm doing a project on Da Vinci, and although the only reason I sited this page is to use the part about the background, I actually enjoyed reading it, which is big for me. Whoever wrote this is in my opinion very clever. Obviously some of the nasty comments' authors were looking for something more factual, but it only takes a few minutes to read through the article, and I don't see much for them to lose. Anyways, nice work.

this site is SOO BAD!! I wanted a structural frame responce, not some idiot going on and on about the artist and BORING SHIT!

beautifully done painting, only one of three woman paintings that leonardo finished!

I visited the Czartoryski Museum a couple recently while in Krakow and found it to be an interesting collection art and other interesting items. The Leonardo, Lady with an Ermine is without doubt the star of the collection, and made the visit a great success.

What is the impact of this piece on the modern world? Project!!!!! Thank you Reply as soon as possible pleaz,,,,,

I will be in Krakow in this summer. After reading this I have to see the Lady with an Ermine. Knowing the history of this painting will make it really special when I'll see it. Also I can teach a thing or two to my Polish husband and his parent. :-)

for an assignment i need to find out info on the actualy girl (lady with an ermine) and i need to do a life in the day of her. anyone no what i can write about her???

It is a great Artwork

i have a ferrett. :) i like this painting alot.

oil on a walnut board

what is the price

i love your art work it rules, 45 eva!! but what is the materials used please help me !!

I am just back from visiting the beautiful Krakow, and a visit to the museum and the'Lady with an Ermine'. I was so impresssed with the picture i bought 2 framed prints from the museum shop. One now hangs on my wall, and the other on my daughter's wall. We both love looking and admiring our special pictures.

I dissagrea about the backgroung and didn't even notice it was black untill you mentioned it.

Who wrote this article? An author would b appreciated.