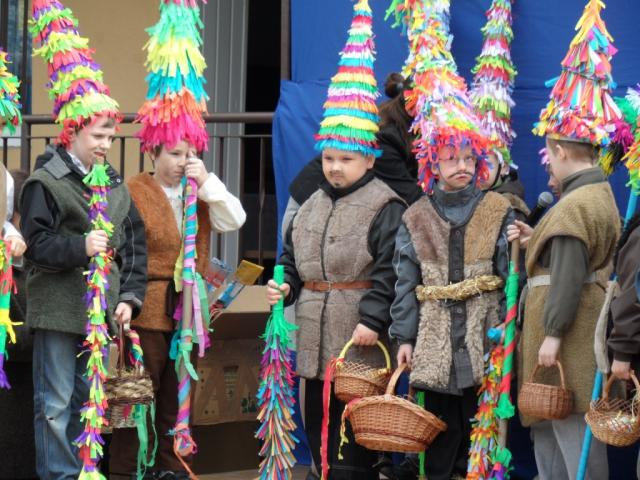 Krakow can boast not only a great amount of monuments, but also unique customs rooted in traditions that date back many centuries. Traditions like egg painting, blessing food for the Easter Sunday breakfast or making water pranks on Easter Monday have been known in Poland for centuries, but in Krakow and the area there are more spectacular Easter traditions.

One of the most famous ones is the Easter Monday fair called Emaus, taking place between Salwator and Zwierzyniec districts of Krakow, by the Kościuszko Mound. This custom dates back to the Baroque period, when many of the rituals connected with folk religion had their beginnings. At that time “emauses”, in other words excursions to churches or chapels located in distant cities, were serving as replacements for the Pilgrimage to the Holy Land. The Krakow Emaus is the only surviving tradition of this kind. Emaus, or as the commoners called it, Hameus, was to be a remedy against the holiday gluttony, an occasion for people to get together in the outdoors and chat. Afterwards, they would just stroll back home. Over the years, the Emaus transformed into a spring picnic accompanied by music, fairgrounds and fair booths.

Another traditional celebration called Rękawka takes place on Tuesday, right after Easter, in the surrounding of the Krak Mound and Lasota Hill, by St. Benedict’s Church. The name of Rękawka comes from the Polish word for “sleeves” or “arms”. It has its origin in the process of heaping up the Krak Mound, for which King Krak’s faithful subjects carried the soil in their hands, or sleeves to create the mound in memory of the founder of the city.

Not many people know the second part of this legend. The custom of handing gifts and food to the poor during Easter started during the process of heaping up the Krak Mound. Over the years Rękawka transformed into a social event or picnic, as in the case of Emaus, but the tradition of sharing goods with the poor preserved until the nineteenth century. Oranges, also called “Roman balls”, bread rolls and eggs were considered to be luxury goods, that’s why people often ended up fighting for it, emerging all bruised and mauled as a result.

In cottages located to the north from Krakow there is another interesting tradition called “pucheroki”. Krakow students, who were quite poor these days, painted their faces, dressed up in cone-shaped straw hats and stood in front of the church reciting random chants, complaining in a funny way about their poverty and collecting some gifts from passers-by. Of course “pucheroki” was a great occasion for making troublesome pranks, so the custom was later prohibited in the cities and survived only in the countryside. Nowadays, in some villages near Krakow, children still walk from house to house in Easter season, reciting chants and collecting some small donations.

There is also one gloomy, yet fascinating custom rooted in Krakovian folklore, the Procession of Arch-brotherhood of Lord’s Suffering. Last active members of this over four hundred year old association hold religious serviced during the Holy Week. They wear black hooded robes with the openings for the eyes only. Nowadays, the only place of the Arch-brotherhood’s activity is the Franciscan Church in Krakow. Twenty of its members, honoured Krakow citizens, still remain incognito. In the eighteenth century, during the Partitions of Poland, on Holy Thursday the Arch-brotherhood could redeem imprisoned debtors and save one prisoner sentenced to death.