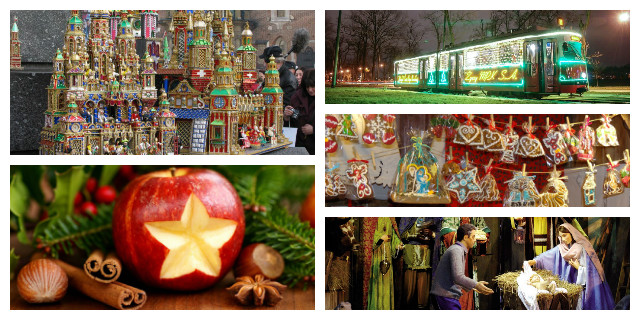 When it comes to Christmas in Poland, it’s the season when pagan and Christian customs mingle. There are some traditions like decorating the tree, which are well known to people around the world, but some of the customs are typical for the eastern part of Europe. Without them, Christmas in Poland wouldn’t be the same.

Although Christmas Eve is not a bank holiday in Poland, most of the Poles consider it the most important day of the whole Christmas period. With most Polish homes, the first half of the day is filled with cleaning, tidying up, cooking and decorating the Christmas tree, whereas the second part is the time to celebrate. On that day, all the above chores are treated as a ritual. While preparing the carp for supper don’t forget to keep a carp scale and put it in your wallet; for will ensure luck and prosperity for the forthcoming year. Once everything is prepared and organized, all family members get dressed in their Sunday best and wait for the first star to appear in the sky. When they spot it, it’s time to sit down to the Christmas Eve supper.

Before it starts, each person gets a sheet of thin white wafer called “opłatek” and break it with the present diners, exchanging best wishes. Afterwards, the family sits down to supper, always leaving one vacant seat at the table in case an unexpected guest appeared. If you find a handful of hay under the tablecloth, don’t be surprised – it’s a symbol of the manger where Baby Jesus was born.

Christmas Eve food is always vegetarian, except the fish. Typical Polish dishes eaten on Christmas Eve include pierogi, kutia (a wheat berry pudding), red borsch, sauerkraut with forest mushrooms and beans, sour mushroom soup, fried, jellied or baked carp and a dried fruit compote. After the supper, in many households comprising the traditional number of twelve dishes, comes the time to sing Christmas carols. Most of Polish Christmas carols and songs in Poland have religious and rather solemn character.

Later, comes the time for less official and, to be frank, the more entertaining part of the evening. It’s high time to unwrap Christmas gifts! In Poland, who brings them depends on the region. And in fact, it is hardly ever Santa Claus, or St. Nicholas, because he visits houses only on the 6th of December. In some households the present-bearer is a female Star or male Starman, in others it can be the Angel, or even Baby Jesus. And if you see a child trying to converse with a family pet, it’s not just a game. According to tradition, Christmas Eve is the only time in the year household animals can speak, in return for sharing their lodging with Baby Jesus. In the past, many farmers have been sneaking out to a barn or stable to try to overhear their animals’ opinions of himself as the owner.

After all excitement connected with gifts, it’s time to go to the church. Pasterka, the Shepherds’ Mass, also known as Midnight Mass is still very popular in Poland. Everybody sings “kolędy” (carols) and goes to see the traditional nativity scenes. The most impressive are the “living” nativity scenes, featuring real humans and animals. Schoolchildren often prepare nativity plays and perform for the locals before and after Christmas.

Christmas Day itself is in Poland what e.g. Boxing Day is in England: a time dedicated mostly to visiting family and friends, and just having a good time. This is the day when “kolędnicy” carol singers start visiting neighbourhoods – usually schoolchildren dressed up as the nativity scene actors: shepherds, King Herod or Death. An interesting Polish touch is the props the carollers bring with them in the more rural parts of Poland: a revolving star on a stick, and a jaw-flapping head of Turoń, a creature symbolizing nature.

Another custom connected with Christmas is preparing elaborate crèches, which are exhibited later on during the Christmas season. The biggest exhibition, and a competition for the most creative and meticulously made crèche in Poland is the one in Krakow, held for tens of years. The creativeness of the constructors is astonishing; they often spend as much as a year to bring their projects to life.

i think that was really fun to read also because i am doing a project on poland and how they selebrate it. thank you so much!

Aww, we're glad you enjoyed it! :) Thanks Hailey, it was very kind of you to write us such lovely comment :)