The year was 1260 AD. The details are hazy, but I think it was a Saturday. To keep from falling asleep during the evening Mass, Pope Alexander IV was entertaining the idea of having a festival in the Port City of Gdansk. A festival that would allow merchants from all over the world to come together and trade commodities, culture, ideas and of course, stories about sea monsters that would eat any ship sailing west from Spain. The spectacular result was St. Dominic's Fair.

With over 740 years of tradition behind it, the fair has become the largest open-air cultural and commercial event in Poland and one of the largest in all Europe. Over the course of 23 days, more than a thousand merchants will set up residency in Gdansk, and every day more than 70,000 people will descend upon the city, a number which doubles on the weekends. 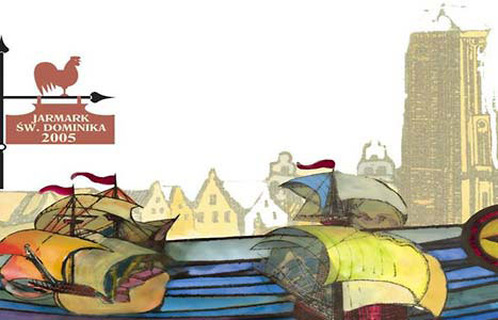 Wondering if you should come join the fun? Well don't rush into anything. First, let us tell you about some of the cultural events and concerts!

There will be brass bands, folk concerts, rock concerts, electronic concerts, and organ concerts. You will not have to endure even a minute without music filling your ears and moving your feet. Make sure to check out the Music at the Monuments of Old Gdansk series and be sure to put your ears within range of the "Gdansk Music Summer" shows.

There will be theatre and drama and actors and actresses galore. Bill Shakespeare will of course be represented and whether it's a guy doing monologues in the middle of the street, or a troop of actors performing in one of the many theatres, you're sure to find yourself giving more than a few standing ovations.

Famous all year and all across the globe for its amber craftsmen, Gdansk will be showcasing their talent and their creativity during Amber day, and if you're looking to decorate the neck of a special someone, be sure to pick up an amber necklace from one of the many amber vendors.

Hmmm... "theatre and necklaces" sounds like maybe the ugly half of humanity is going to be a little bored. Don't worry guys, there are going to be plenty of sporting events, including The International Dominican Dragon Boat Rally, The International St Dominic Race, Motor Boat Races, and the Gdansk Canoe Festival. Also in the works is a Chivalry Tournament sure to inspire the dragon slaying, princess rescuing hero in all of us. Besides, the beer will be flowing like wine so don't worry about having to endure any opera in a complete and unaltered state of mind.

Fireworks, games, parades and pageants, St. Dominic's has it all. Bring the kids, bring Grandma, bring your friends, and bring yourself. Bring that youthful exuberance that only a fair in the summer can really bring out! The Fair is an interactive experience, so don't hesitate to join in the fun, haggle with the merchants, or maybe even bring that old Abba record and dance in the streets. We'll be there to throw some change in your hat, or if your blocking the stage where a real dancer is performing, we'll throw some cabbage your way instead of coinage.

Come one, come all to St. Dominic's Fair. I don't want to think about what Pope Alexander IV would say if you didn't come, but I'm sure people were a lot less forgiving about things in 1260.

PLEASE COULD YOU TELL ME THE DATES FOR ST DOMINICS MARKET IN GDANSK 2014.

when will this event take place in 2010? I will be in Gdansk in the latter part of August!

http://www.trojmiasto.pl/jarmark/ Thats the official site for the fair 2010. You may need Google translate but all the information is there.

St. Diominic Fair is starting 28 July and last for 2 weeks. I was born in Gdansk. My daughter is going there in two weeks. She is so happy to be there during the Fair.

i m a marchant from morocco and i would like to tak part from this evens and to breing many of artisanal things from my countrie to sel it here n is any body know if i can have a place to sel goods ? is any body know how i can rent a place ? i will be very thankfuill if somebody give me an answer thanks in advice and see you youness

what are the dates of the dominican fair in 2010

can anyone tell me where can i get the programme from internet?

My wife and I visited Gdansk in 2007 and were really impressed by the Dominican Fair.We have visited Poland many times but this was our first time in Gdansk. Hopefully it won't be our last. It is difficult for us to find out dates of events in Poland from Western Australia so could somebody please let us know the fair dates for 2009?

Does anyone know the dates of St Dominics Fair in 2009?

St Dominic's Fair starts at 26 July and ends at 17 August. Come to Tri-city!

Yes it was brilliant last year. But WHEN IS IT ? can't find any dates.

When is the celebrations the Gdansk D ominic's Fair, St. Dominic's Festival dansk and Gdansk Life? I think to go in next July (from 17 to 22)Thanks for your answerd Hortensia