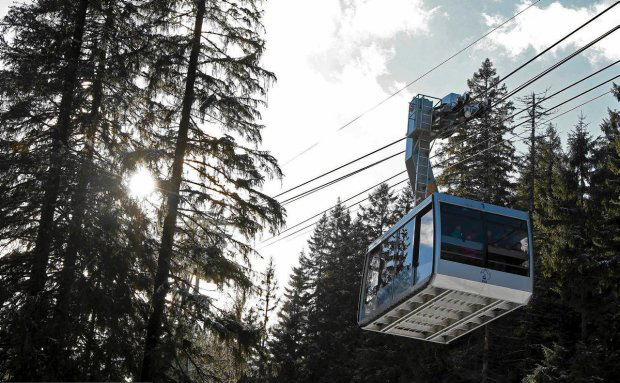 Polskie Koleje Górskie (Polish Mountain Cableways), an Ltd. company created by four districts of Podhale: the city of Zakopane, as well as Bukowina Tatrzańska, Kościelisko and Poronin, became a new owner of the cable car to Mt. Kasprowy Wierch.

In 2011, it emerged that the cableway, owned by the Polish Cableways Company (Polskie Koleje Linowe), a part of Polish Railways (PKP), was to be sold to a private investor. This meant not just the Kasprowy cableway, but similar facilities on Mt. Góra Parkowa in Krynica, Gubałówka and Butorowy Wierch in Zakopane, Palenica in Szczawnica, Żar in Międzybrodzie Żywieckie and Mosorny Groń in Zawoja, along with other properties and land.

The management of the Tatra National Park were the first to react. Director Piotr Skawiński noted that the future owner of the cableway would have a difficult job, since the Tatra National Park would continue to own the station at the top of the mountain and the last cable support pillar before the top. “In my opinion, a public-private company would be a better choice for administering the facility, combining both business and the environmental aspect,” said Skawiński.

Podhale residents were divided over the plan. Mayor of Zakopane, Janusz Majcher, saw the privatisation as an opportunity to establish a public-private partnership and hoped that an investor could be persuaded to cooperate with local government in the development of tourism. Some groups objected to the plan on the grounds that it would involve selling what they saw as important historical sites that belong to the nation.

As petitions were being drawn up and signed in September 2011, local businesses were looking nervously over their shoulders at the Slovaks. With their well-equipped and modern resorts, the Slovak Tatras represent the fiercest competition for Podhale. Then came a bombshell – the biggest tourism company in Slovakia, Tatra Mountain Resorts, declared its intention to buy Polish Cableways.

At the same time, the six districts with Polish Cableways facilities (Zakopane, Szczawnica, Zawoja, Krynica-Zdrój, Kościelisko and Czernichów), signed a letter of intent to purchase the company. A month later, four of these six turned to Tatra Mountain Resorts for finance, in the hope that they would be able to preserve a degree of local influence after the privatisation. Zakopane and Kościelisko, however, withdrew.

The rivalry between the Slovak company and Zakopane became heated, and was an issue in the local election campaign in 2011. In July 2012, Zakopane’s local authorities established a company called Polish Mountain Cableways and planned to issue bonds in order to finance the purchase of Polish Cableways. In August of the same year, a new bidder appeared in the person of former Zakopane mayor, and one of the richest men in Poland, Adam Bachleda-Curuś. He was supported by local businessmen and the city council.

Competitiveness between Polish and Slovak resorts began to heat up. The Slovaks declared that they would issue a ski pass for all resorts in Poland, the Czech Republic and Slovakia in the winter, and a tourist card with discounts for sightseeing in Zakopane, Wieliczka and Krakow in the summer. In return, Polish districts announced a ski pass that would be a discount card for various attractions in the region, and promised to invest in ecological programmes.

After a long battle the tender was finally accepted last Wednesday, on May 22nd, and the cableway went for 215 million zlotys. The money was secured by Mid Europa Partners invstment fund, which became a major interest in the business.