Spisz, the Pieniny and beyond

If you are inspired to negotiate the local bus system, or have the opportunity to jump in a car, there are some very rewarding days out in the region. Don't be put off by the prospect of taking your family on a wild goose chase, as many hotels in both Cracow and Zakopane can help you get to where you want to go, often liasing directly with bus companies. 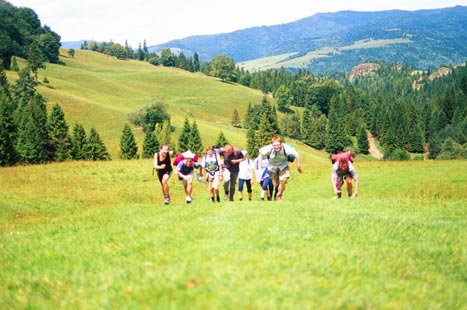 One area that feels on the crest of discovery is Czorsztyn, which is about half an hour north east of Zakopane. Czorsztyn lies on the fringe of the Spisz region and it is dominated by a vast, man-made lake. On the southern bank lies the splendid old gothic castle of Niedzica, which for centuries lay on the border with Hungary.

Within close striking distance of the lake are a handful of enchanting old wooden churches. For many years these were little known outside of Poland, but they were recognized in 2002, when a clutch were listed by Unesco - a tribute that was richly deserved. Some of the best examples, including Debno, Harklowa and Grywald, are no more than ten minutes from Czorsztyn, making this a fine area to explore.

Heading still further east is the beautiful Pieniny mountain range. Less dramatic than the Tatry yet in their own way perhaps more beautiful, they are another favourite amongst the Poles. The Dunajec river cuts through the mountains and it is possible to go rafting here - a very worthwhile trip on a summers day.

Closer to Cracow, there are the famous salt mines of Wieliczka. However, many travellers will also be interested in visiting the former Nazi concentration camp of Auschwitz.