The Tatras are the highest part of the Carpathian mountain range, and for centuries they were Poland's natural border in the south. Arriving in Poland by air, the granite peaks rear up out of the clouds, slashing the skies like the claws of some mythic beast.

Traditionally, the lands beyond here belonged to Hungary, but by the mid-seventeenth century, the Ottoman Empire - Poland's traditional foe - had crept all the way up to the Tatras. As the Sultan's Empire crumbled, the Hungarians moved back in, and they enjoyed warm relations with the Poles. Today, it is the goodly Slovakians who live beyond the mountains, and border skirmishes are not likely to interfere with your hiking trips. 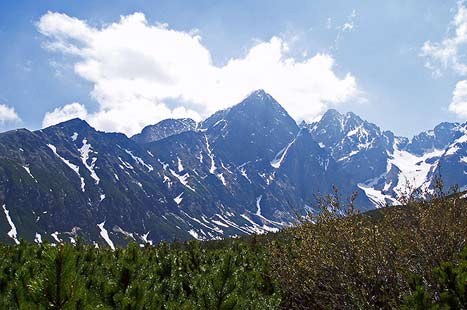 The Tatra mountains cover some 785 square kilometres, three quarters of which lie in Slovakia. The highest Polish peak is Mount Rysy, which rises to 2499 metres above sea level. However, the most distinctive peak is Giewont, which is known affectionately as the 'Sleeping Knight'.

The Polish part of the Tatras was formally declared a national park in 1955. The lower and middle parts of the range are cloaked in forest. Beechs, which were traditional in this area, are now rarer, being superceded by larches, and above all spruces. These continue to grow beyond 1250 metres, along with stone pines, and it is in this area that wildlife is at its richest. Deer, wild boar, lynx, wolves and bears are to be found, as well as a great variety of birds and the Apollo butterfly.

Higher up, in the rockier areas, live the chamois and the alpine marmot and vole. The golden eagle is now very rare. However, as country dwellers know, it is quite likely that you won't see any mammals at all, as they are shy of humanfolk. In this case you may have to make to do with the slightly surreal stuffed collection in the Tatra Museum.

There are rare types of flowers on the starker rock faces, but the richest flowers can be seen in the meadows and down in the valleys, where yellow crocuses form carpets in Spring. It is in the valleys too, that you can discover the caves. These are a very popular aspect of the Tatras, and steeped in legend. Much like the English band of Robin Hood, the region was once inhabited by outlaws - the famed 'zbojnicki'. Seven caves are open to the public, six of which lie in the beautiful Koscieliska valley. Another popular feature of the range are the lakes, most famously the vast Morskie Oko, the 'Eye of the Sea.'

For skiers, the Kasprowy Wierch Peak is serviced by cable-car, and there are chairlifts in the Goryczlowa and Gasienicowa valleys. For hikers, there are 250 kilometres of trails in the park, ranging from leisurely strolls to hair-raising ascents for serious climbers. Entrance to the valleys is possible by bus, but from there you must continue on foot to the heart of the Tatras. Mountain bikes are permitted only on a few paths. Owing to the unpredictability of Mother Nature, there are basic safety precautions which are essential to bear in mind.

With the collapse of the Iron Curtain, border relations are now freer than ever. Thus for dedicated hikers, the opportunity to explore the region in depth is very much an option. Poles are the first to say how wonderful the Slovakian Tatras are, and it's well worth bearing this in mind if you want to get a full flavour of this wild region.

A sample of Tatra beauty is found below:

Glad to find the Tatra mountains because I never heard of them before and I've been puzzling over it as a clue in my crossword. They look amazing though.

Planning to visit in May. Will some of the lower elevation hiking trails in the Tatras be open? Understand higher elevation trails are probably still unde rsnow. We are interested in day hiking, sodo not need lodge/hutaccomodtions on trails. Thank you.

Looks lovely; would love to vacation in the summer!

this site is very nice & just helped me on my homework

im Doing a project and this is helpfull thanksss!

Hello Dear,you will for sure enjoyed your future stay in Zakopane as the snowfalls have been good until now,the temperatures below zero celsius and the weather by day with blue sky most of the time. If you are beginner or dium level in skiing, you will improve without any doubt, then yo will for sure have some very nice time after skiing in shops, restaurants, pubs, disco... Zakopane and its mountains are very beautiful in winter as you can ski down some of them, summer even more as you can walk up and down them on most of the peaks, cliffs and hills. We wish you to have a nice time in Zakopane.Staff of Apart-center and Ogrodygorskie residence(26 very comfy and cozy apartments in Zakopane);-)

im going in 9 days,,i will let you all know what i think

Tatra mountains are very nice to walk on until snow is coming, after that , it is the time to enjoy skiing in a beautiful and romantic surroundings.

wow those moutains are awesome coool

Skiing in Zakopane is really advised for beginner-medium level skier as most resorts/ski complex which are in different locations and belong to different owners have a short length and wideness,have a low-medium ski grade.Some resorts are longer and large, so they are advised for person with medium-advanced ski level.So,if you are not satisfied of the ski conditions of the slopes where you have skied, you can change ski resorts to experience other style of slopes.Alps and Tatra mountain on polish side are very different because of all what I wrote previously.Snowfall should be very good at the end of January and February but only God knows about it at the actual time.There is also a nice atmosphere in Zakopane in winter after skking in streets, pubs, bars , restaurants with all folklore of a highlander ski touristic city.You may check the zakopane-life website for details of slopes, also narty.l.pl , narty.pl, discoverzakopane.pl.Hope my answer helps.Staff of Ogrodygorskie Residence of apartments, Zakopane.

Would like as much info as possible about skiing Zakopane area-vertical, snow quality vs alps, number lifts ? We're considering flying over The end of Jan 2013 and would appreciate all opinions. Tthanks

i love it and would like to reach there one day

your information is very good

Hello Tatra p., I invite you to walk in the Tatra mountains.Also, you may try a nice beer named Tatra Jasne or Mocne.Zakopane has a lot to offer to visit and see like a lot in Poland.Welcome soon

Omg, my name is tatra!! I didnt know there was a mountain range with the same name until recently! This is soo cool haha.

for the past 4 years i have every month walked the Tatras in 4 countrys,astoundingly beautiful and on many occasions in winter never saw anybody

Glad I married a Polish woman! going there in June.

wow its wonderful and very attractive. love it

There are plenty of places to explore, visit, trek, hike, sightsee.It can be very easy or very hrd depending o the risk you want to take.But , you are all right, Poland and specially Zakopane and Cracow are wonderful cities and their people also.See you soon maybe.

i think that the mountain is pretty cool and i would like to explore it one day and take pictures of me on it is it dangerous or safe?

I was there yesterday, other than the sunburn, it is the most beautiful place I have visited. I would highly recommend this place for a vacation - also if you are a skier, they have some great jumps! Go for it! Poland is a beautiful and friendly country.

This is the most beautyful place in my country. I went there a few times and I be back to Tatra again. You have to go to Zakopane.There is one minus - too many turists!!!!!

its beautiful.i wish i can go there someday.part of my desire.

Can't wait to get up into those mountains...!

that's btiful, i wish i could go there. it's superb

i love this pic its totally awsome! omg!

these mountains are so beautiful!

this mountain were formed by faulting.forces caused by geothermal reaction causes the tension and compressional forces

the Tatra Mountains are fantastic. Beauty beyond belief

i think it is relly cool

wow what a picture

well! hello we think the tatra mountains are the best plase on the word. The last month we visited it, was a very exited and extrange experience. 1.000 kiss bye bye

Well of course, Castle Dracula was in the Carpathians (albeit the Transylvanian section, in today's Romania) so the Count would feel at home here. Check the film Nosferatu by Herzog,. filmed in this region (Slovak side)

is this a world heritage sit?

this is really beautiful and its really look like my own country TIBET. i wish i will be there back tomy country soon, Free Tibet

yall are stupid for commentin a stupid picture of a mountain.....

wow this pic is so cool everyone should print this and show it to yor friendz!!!!!!!!

WOW THAT IS SOOOOOOO BEAUTIFULL!!!!! I love majestic pictures like that they really make me smille!!

man we have so many mountains here in pakistan this is nothing like them but anyway wow!!

I REALLY MISS THIS PLACE AND COUNTRY...

this picture is gourgus! It makes me just wanna jump in the lake!

it is so nice and so intresting and beautiful

It nice! but need some replacement. best of luck!!!!!!

THIS IS A GORGEOUS PICTURE

ithink this was a very good piece of work

Sorry Question rather than commment, Has anyone stayed in Krakow, but done a day tour out to the Tatra's for snowmobiling. If so, which tour company did you use please, having trouble finding details on day tours. Thanks

can anyone answer the Q about hillwalking in March/April is it possible or is there too much snow??

Hi there - I am already excited at the thought of visiting Zakopane for the first time in Feb. Just a bit apprehensive about being able to snow-shoe and walk in the mountains in winter. Can anyone offer advice as to how to organise this in advance - as we are not skiers ? Thanks you !

zakopane is beautiful l climbed up tatry mountains went to morskie oko after thats just a beautiful place when you leave your heart tells you to go back zakopane is a the best.

"yes" very interesting and can only enjoy by watching its pics. I belong from hill area and just feel the emotion to be there. it is hot if there are both for kissing.

We've just come back from Poland and we climbed to the top of the Tatra mountains.The view was jut breathtakingly spectacular.

huh??? im kinda lost by some of the comments but these pictures are so stunning and amazing!!! but im alittle skeptical about visiting there!

i've been there because i love traveling all over the world! it'so ravishing and amazing!!

i love it. i have been there several times. i even made love at the top

dat looks fun to be on top of nd scary

After seeing this picture of Mountains i feel that Nature is the only almighty God , A miracle ,,,,,,,,,, A friend who is always behind me and supporting me forever in this World...........

After seeing this picture of Mountains i feel that Nature is the only almighty God , A miracle ,,,,,,,,,, A friend who is always behind me and supporting me forever in this World...........

This is a really good page. The picture is brill

hi there its cool

that is really pretty i would love to that