The wooden churches of Southern Poland are jewels, and their acknowledgment by UNESCO in 2003 was a richly deserved tribute. Five churches in Malopolska, (Little Poland), have so far been listed, and there are at least as many that are worth visiting in the immediate vicinity of Czorsztyn lake.

The designs of these churches - some of which date back to the fifteenth century - tended to follow a pattern, and it is quickly recognizable. They were built from larchwood without the use of nails (each plank being carefully fitted with pegs), and the body rises into a steeply pitched, shingled roof with a single bell-tower. They resemble a more squat version of the old brick gothic church of the Holy Cross in Krakow. Several, such as at Debno and Harklowa, have very rare and distinctive stencilling that covers broad sections of the interior. 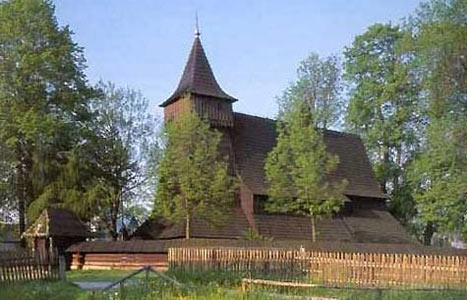 The churches really are enchanting, and if they sound like your cup of tea, they're well worth exploring. There are two important factors to bear in mind. The first is that the only real way to do justice to more than one is by car. The second (particularly if you are visiting outside of the summer months) is that many may appear to be closed when you first arrive. However, the keys can almost always be obtained from the local priest, who tends to live next door. A sincere, smiling request should see you right.

If you are approaching Czorsztyn by car from Zakopane, (and the reverse if you are coming from Krakow), you could do a circle of the lake, and you might also stop at Bialka and Trybsz on the way. The latter is a very pretty chapel, with beautiful faded frescos from the mid seventeenth century on the walls. The pulpit is also notable, which resembles a dainty eighteenth century tea cup.

From there you could drive on to Niedzica Castle, which is a good spot for lunch. Alternatively, you could cross the southern tip of the lake and press on to Grywald, one of the finest examples of these churches. This has an enchanting location on top of a small hill, and you must cross a small brook to access it.

Heading north from Grywald, parallel with the western bank of the lake, you might also stop at the ruins of Czorsztyn, which commands a fine view of Niedzica.

From there, Osada Czorsztyn, 'the village from the bottom of the lake' (the most beautiful buildings were salvaged before the reservoir was filled in) lies a couple of kilometres further north on your right. It will be interesting to see how this place develops - the project is in its budding stages.

At the northern end of the lake are two of the most precious churches in the region, Debno and Harklowa, which lie in neighbouring villages. The former, which dates back to the mid fifteenth century, is one of the Unesco listed churches, and its interior is covered with enchanting stencils of religious and natural motifs.

A little further north is the magnificent church of Harklowa. Here the sense of the spirits of nature blending with the Christian paradise reachs its apogee. The painted ceiling, with its siren-like princesses swirling amidst a sea of colour, seems to belong to the world of Arthurian legend, or indeed Tolkien.

If you are intrigued to press on further north, you could head for Lopuszna, which was the parish church of Jozef Tischner (1931-2000), one of the most popular figures in the Catholic Church during the communist era. He was a straight-talking, good-natured and jolly man, with a great passion for the outdoors. The mere mention of his name brings a smile to the faces of many Poles. The old wooden church, which was damaged many times by floods, is nevertheless a beautiful example of the local style. Also in the village you will find an old manor, which is typical of the region, and it houses a small museum.

Hello Dear,most churches in Zakopane do celebrate Easter Mass. Here is a keyword to find on google, the time of mass in different churches in and around Zakopane: msze kosciol zakopane Staff of Apart-center and Ogrodygorskie residence in Zakopane(27 very comfy and cozy apartments in 3 locations in Zakopane);-)

Do you know where we might be able to celebrate Easter mass in and around Zakopane this year?

Hello. Between 20 June and 5 September there will be concerts in wooden churches of Malopolska. I cordially recommend. Please see .drewniana.malopolska.pl

Interesting, where do I rent a car?!