Local Life Wroclaw is about to select candidates for Best Places awards, dedicated to rewarding and encouraging excellence in products, service and ideas. You are helping us to make the best choice.

Daytona Music Club makes quite a snazzy claim: "This place is always kickin'!" With a motto like that, how could you not visit? Open from 8 PM and closing when the last guest leaves (7 days a week), Daytona packs a punch. Come see the stylings of DJs from all over Europe and Asia. Dance the night away on the 500-square-metre floor while a flood of flashy light does its thing overhead. Each day has a special theme (like the "VIP Freedom Mondays," where each bottled drink is buy-one-get-one), so choose wisely. Want the full VIP treatment? Rent out the whole club!

Visited Wroclaw from Wed 10th to Sunday 14th Nov so partied hard for 4 nights and really enjoyed it, Daytona was good every night and yes, as always the Polish girls were charming and beuatiful and they love to party so I danced my ass off all night with some really sexy ladies, there were a few local meat heads who were jealous I was grinding with the local girls, but I didn't let them bother me or stop me from enjoying myself after all I didn't travel half way across Europe to allow the local spud heads to stop me from enjoying myself. Would definately say visit Daytona as it is good for laugh and the music is generally good.

Great place: good music, cheap drinks and friendly people around! Went there on friday night before the White Sensation Saturday and it was full and there were plenty of gorgeous girls! Lots of idiots gym-obsessed drunk guys also in this place that you should be careful of because you never know how can they react! A special thanx to the little waitress for the nice present she gave me in the back room! :-)

3 nights in a row party till I dropped... Good music, good drinks, good crowd and a good hangover the day after...

this place was a crapfest. There was shit on the floor and the music was KAKAPIPI. The woman were very hot and i had sex with all of them at once. Very sexy time!

I loved the place, picked up loads of skirt!

have u free night and no idea what to do except for wild parting? go to Daytona! the same league as Alibi Club - always great music, always great parties and always lots of people inside no matter what day of the week is it. even if the next day is in the begging of your exams period - it's not so important.

Poor Anna. Most Polish girls I know prefer western lads. Polish lads have bardzo trochy kultury, so I am told. Actually I know few Polish girls who have Polish boyfriends. Wrocław girls are sound and friendly. You must come from a village, Anna mała.

I just read a review written by someone, who's very hospitable. Polish girls for Polish boys only, ha? Good luck boy or girl! You really suck!

Fridays are ok in here but saturday nights were deadly, full of meat-head poles trying to fight you because your English. Wouldnt go back again

I was there a few times and yes the dance floor is way to small and i think its a shit hole, the people are not nice and to the people that are going with there partners be carefull becouse you will have a fight in there becouse of other men looking and touching your women. A real shit hole

A decant place to go about and 2 quid a double voddie. Majority of people r very friendly but of course there where a few skinny polish shits with small man syndrome who thourght they where rockie ballboa.As we didn't want to get arrested and tampered with by polish police we avoided powerslamming these tossers,which we was then going to be followed up with a few butterbean haymakers! They soon got the message that we didn't want any trouble and we ended up getting blind drunk with fit finnish gals. We went again Sunday where we met top Norwegian girls where we got drunk and lived the dream how you should

A decant place to go about 2 quid a double voddie. Majority of people r very friendly but of course there where a few skinny polish shits with small man syndrome who thourght they where rockie ballboa.As we didn't want to get arrested and tampered with by polish police we avoided powerslamming these tossers,which we was then going to be followed by followed by a few butterbean haymakers! They soon got the message and we ended up getting blind drunk with fit finnish gals. We went again Sunday where we met top Norwegian girls where we got drunk and lived the dream how you should

hi how are you_?my name is erman..I will come one week later wroclaw for üniversty match..Can we enjoy by night :):)

What a laugh, not the biggest club in the world but the music is good and the women are different class.

People were pretty friendly and drinks were cheap. I wasn't down with all the techno/house but that's what you will find in every club out here. the dance floor is too small and gets crowded enough to not move

Looking for the good party place in Wro - there you go...I spent a few nights there - every night with a new chick... ;) go and try...

i just didnt like what everyone trying to say about this club!!! it was cool place and i had alot of fun for one week last summer! everynight DAYTONA:)

This place was full of f/ing trannies! Only good thing about it was the cheap booze. Naff all else to say about it. Try elsewhere for better sounds.

What a let dowm, Drunk a dodgy pint on the first night and spent72hour on the jon, my ass hole is totally ruined!!

At least i can say i was fortunate enough to meet Mr Concrete, What a legend

What a fucking club - full of clacker, craig david on stage, even pulled stifflers mom!! snidey looks from the locals but only because i'm built like a block of granite. Fucking your J to the mother fucking C - Bitch

Anna has got it all wrong !! all the Polish are in Great Britain. Are there any Polish people left in Poland for you love. Your a tad racist considering we in the UK are supporting all the Eastern Euro's encluding thousands of Polish immigrents with our NHS and jobs ! p.s you have shite taste in clothes.

The club is known w Wroclawians as a place where "stupid blondes" look for moneyed guys (foreigners most welcome). If you're looking for an easy girl, buy her a couple of drinks, flash her with a gold credit card and she's yours. Nothing else to do there really.

Daytona is Mint, met a beautiful girl there and will visiting Wroclaw and Daytona again!! Dont know what Anna's problem is, she must b one of the very rare ugly girls that get no attention!!

"Just got back from Wroclaw as we went to watch the speedway with the sponsors.Spent 3 nights in Daytona and what a night.Met one of the most Beautiful girls that I have ever seen and we have stayed intouch since.Going back in 4 weeks and even looking at buying property in the centre"

"Just got back from Wroclaw as we went to watch the speedway with the sponsors.Spent 3 nights in Daytona and what a night.Met one of the most Beautiful girls that I have ever seen and we have stayed intouch since.Going back in 4 weeks and even looking at buying property in the centre"

Best club in Wroclaw, we spent every night in there!! Cheap drinks, top atmosphere and Fantastic music!! Even let 8 lads in dressed as Hoola Girls :o)

The Best Disco In Poland!! The best girls and the best DJ I have ever heard (The one blond with glasses, from Holland)who put "SEX on SAX " and took me into orgasm! I recomend everybody to go there cause.. " SE ZAMPA 100% "!!! Jajaj!

nice place...you can find nice looking girls..it is a roll of the dice but you got a great chance...

Cracking place. Excellent music, cheap drinks (Smirnoff & mixer around £1.60), and amazing girls. Stayed in here for hours. It's best to get there around 11/12. There's a few meatheads in here but they're worse elsewhere and you can have a bit of banter with them here. Much better than Metropolis - which is full of young pill-poppers and look likes the nightclub from Blade.

Was in wroclaw for a weekend(23-25Feb07). Ok dance music, drink cheap and good atmosphere. Group of 6, most of us prefering metropol which appeared bigger and busier. Polish guys seemed to dislike us being there. girls all stunning and most speak english.

Terrible when i was there, but it was a midweeker. Just a few crewcuts sitting around looking nasty. Does anyone know the best places to go in Wroclaw during the week?

A kind of less pretentious version of the radio bar same two bar/two dance floor layout but not quite so modern looking. However ask anyone in this bar the best place to go in wroclaw and they will say 'here'(as if this is the only place that exists) . Buy one get one free offer allowed us to get 16 pints of polish beer for £10 about 6 euros I don't think you can beat that anywhere in europe!. Mostly house music all girls beautiful (as standard in all Polish nightclubs)

Years after years i have been i DAYTONA and time after time it is worst and worst, only very young women, everyday the same music, i miss much daytona 2001 to 2004. in polish i would say "nie polecam"

This place is fantastic, friendly people and great music...

Nicest place to go out in poland! Have been from zakopane to sopot and crakow, but we always go back to wroclaw's Daytona! See you back in may 06!

Add a widget for Daytona Music Club to your website and get more reviews! 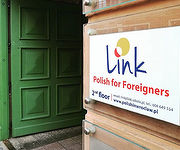 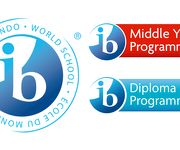 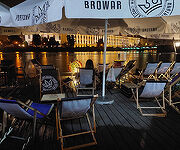 BARBARKA A boat that's a bar ! 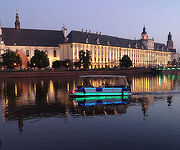 Katamaran BARBARKAR All aboard, captain 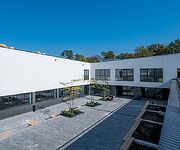