Era Nowe Horyzonty (Era New Horizons) Film Festival began life in 2001 in Cieszyn in the West of Poland, with the ambitious mission statement of showcasing cinema that ran against contemporary trends. A flavour of what to expect can be gleaned from the types of ground-breaking films shown at previous editions of the festival - such as Almodovar's 'Talk to Her', Ozon's 'Eight Women' and Sokorov's ground-breaking 'Russian Ark', which was shot in one take in the Hermitage, St. Petersburg.

Growing in popularity, scope and ambition, the year 2006 saw New Horizons move to Wroclaw, where the event continues to support and expose the most interesting works being made from all around the world. With so much of today's cinema directed towards the mass audiences and the box office, high brow film lovers will be delighted with the chance to see movie-making at its rawest and most inimitable... It is exactly for these purists that this event is organised! 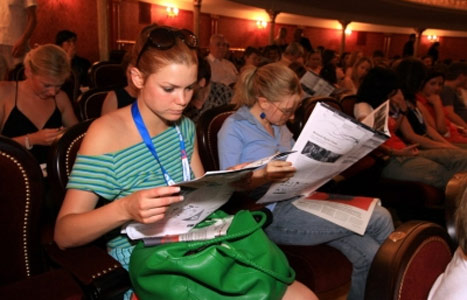 2008 will see a winning formula of competitions, reviews, retrospectives and a host of exciting accompanying events come once again to Wroclaw in the form of the ENH film festival. The international competition as always forms the backbone of the event but an intimate look at both Brazilian and New Zealand cinema should prove fascinating, whilst concerts in Wroclaw's opera house and hip parties in the Arsenal building will no doubt heat up the atmosphere.

For more info on ENH 2008 head to our July events page, or go straight to the official site.

The 2007 edition of New Horizons will see the festival grow once more, this time to screenings of 350 long and short films in 13 auditoriums. There will be over 100 Polish premieres alone! There are many different aspects of the New Horizons programme but key elements will include: the International Competition - which will be battled out between 18 great selections yet to be screened in Poland; the New Polish Film Competition - carrying a whopping 100,000 PLN prize; and this year's special focus, Australian Cinema. The latter will delve back into the golden era of Australian cinema in the 1970s as well as seeing what has been accomplished in more modern times.

Of course all that is just the tip of the iceburg, and with documentaries, discussions, retrospectives and even the odd screening in the Old Town Square, 2007 promises to be anything but dull.

Jonas ( from Brazil) I love this city, lived here for 6 years.

looking forward to the New Horizons again this year. had a blast in 2006! Some truly great cinema, and some great nightlife in Wroclaw too

Who's the sexy minx in the photo?