Wroclaw's Copernicus Airport is located on Strachowice (Wroclaw, ul. Skarzynskiego 36), 12km west of the centre of town. It started life in the thirties as a small German airbase (Wroclaw was part of German territory before the Second World War - see our page on Breslau), before taking on civil aviation duties in the 40s and 50s. Strachowice only became an international airport in the 1990s, when flights began to Frankfurt Main. Today however you can fly from Wroclaw to a host of international airports such as Alicante, Barcelona, Bolon, Burgas (from 2010.06.12), Bristol, Brussels, Cork, Doncaster Sheffield, Dortmund, Dublin, Dsseldorf, Dsseldorf Weeze, East Midlands, Eindhoven, Forli, Frankfurt Hahn, Frankfurt am Main, Glasgow, Liverpool, London, Malaga (from 2010.06.25), Milan, Munich, Oslo, Paris, Rome, Shannon and within Poland to Warsaw. 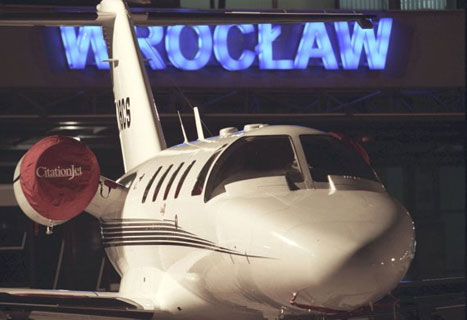 You can get to the airport easily enough from town on the 406 bus (from ul. Dworcowa, 100m North of the main train station). It takes 20 minutes and runs twice every hour, so leave a little time. If you prefer not to wait - time is money after all - then in advance, or take your chance in the ranks.

In terms of facilities the airport has a handful of shops and eateries, a post office, ATM, bureau d'exchange, first aid unit and of course being Poland it has a chapel as well.

If you need any more information we suggest you check out the official Wroclaw Airport website. Worth a look if only to peruse the photo gallery of guests that include Jacques Chirac, Gerhard Shroder, Chris De Burgh and Santa Claus.

How far is it from Warsaw to Wroclaw?

Does the 406 bus operate during the night - my flight arrives early after 1.00 a.m

Iam going to Poznan from spindleruv Mlyn saturday the 19th of feb 2011 Just not sure how a taxi how much would that cost, would it be better to take a taxi to wroclaw and get a train??

can i go to spindleruv mlyn from wroclaw by bus?there is any possibility? how much will it cost?

It would be better for you to take a taxi. Would cost you about 50PLN (12 pounds) and it will take you directly to the hotel. The only bus from the airport is nr 406 but it will take you to the city centre from where you would have to catch another bus to get anywhere closer to your hotel. Time consuming hassle to save 10 pounds?

I've been living in Wroclaw for 10 months as an European Volunteer and my present was to not to let me go back to my country. Unfortunately officers in the airport for the check in made a very huge problem about my ticket which was bought 11 months before my flight. On my flight time, after i waited 7 hours in the airport they made a surprise to me that "you cannot fly" why? "because you have 10 more extra kilos in your luggage" Ok i pay over. "ahhhh, but your ticket is via Munchen (GERMANY) but you have no visa for Germany!!" "But i have a Schengen visa, no need visa for Germany to change my plane there, i already have been tehre 4 times during my stay in Poland and i already flied from Istanbul to Warszaw via Germany anyway... Manager of the airport comes; takes my passport and all the documents... after 30 minutes comes back... "I talked to Germany, it is impossible for you to fly" and i turn back to my internat... Then i goto related office of Germany in Wroclaw. Their comment is: "But you have already visa for all Europe and schgen, you don't need it... " But i have to take a visa to get to my home... They are making problem in Wroclaw airport... "After 1 hour my Germany visa is ready, even for 2 days!!! "Then i went again to Wroclaw airport with my work manager and mentor after 9 days coz of there was no longer appropriate flight. I complained with 3 pages of my difficulties... But somehow i couldn2t find any related officers... Finally i'm at home. I have been in Poland 7-8 times more but i always choose to fly to Chopin airport in Warszawa, which there officer know all the procedure already, not ignorant like in Wroclaw airport...

"Is there any flights from wroclaw to stockholm or skavsta-nyköping?"

lovely aiport but security is without manners rude lazy and annoying . my partner is english and im foce to pass mesages to him because "officers" dont know english !!!

should have opened an airport in legnica? the runway there can take a 747 no probs, money right?

Could you please provide more information on corporate aviation and business jets??? Is tere such thing in Wroclaw???

How many airline to wroclaw city Poland?

small and nice airport. I suggest everybody to see culturel center wraslow. You will like a lot like me:))

This is a neat little airport, and the bus stop into town is directly opposite the entrance/exit. There is a small cafe which is not expensive as airports go. I am going back next month with some mates this time, i took the mrs last time. The city is cool and there are lots of pubs/eateries and enough to keep the mrs happy on the cultural front for three or four days.

Our son is getting married July in Stronie Slaskie. What are our options when traveling from Wroclaw airport and how long is the journey.

i want to know if its possible to fly to wroclaw from romania? if yes, from which city? if not, from hungary is any flight to wroclaw?

Is there any flights from wroclaw to stockholm or skavsta-nyköping?

Are there any deers on the runway?

Dear Sirs Can you tell me the length of the runway at Wroclaw Airport? I am planning a charter with an An225 or An124 and need to know this. Thanks and Regards Erwin E. Zehr Manager Projects Air